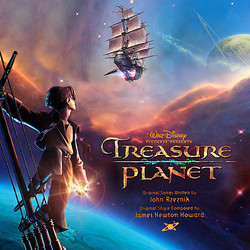 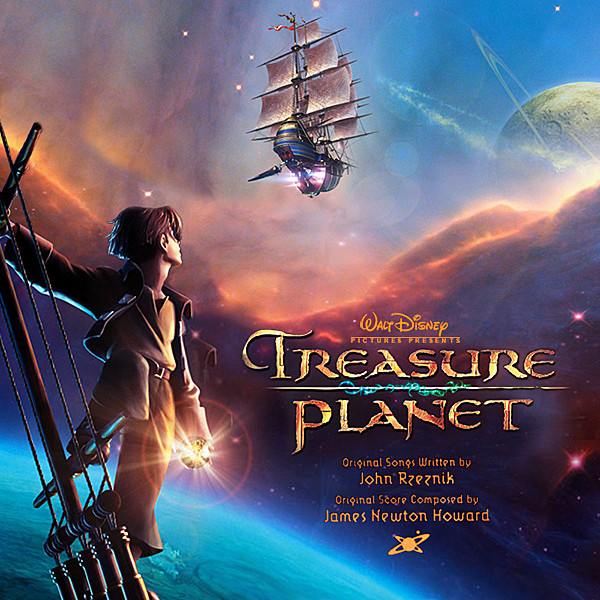 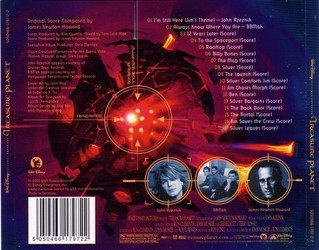 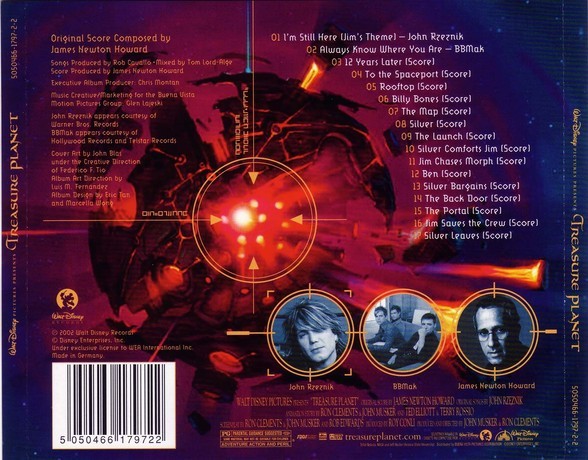 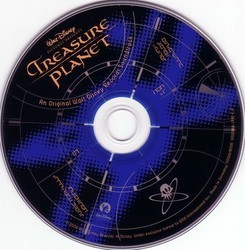 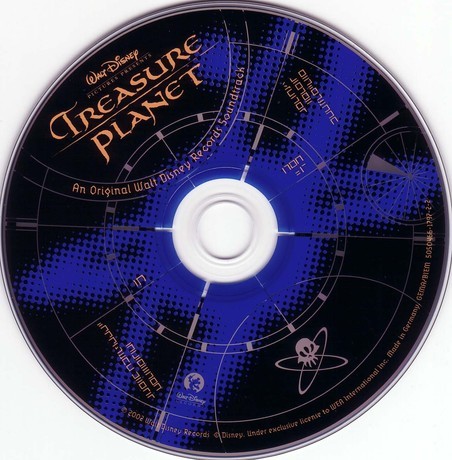 Show reviews in other languages
Treasure Planet - 06/10 - Review of Andreas Lindahl, submitted at 2008-01-20 21:25:40
With the score for Treasure Planet - Disney's take on Robert Louis Stevenson's classic novel Treasure Island - James Newton Howard continues the successful collaboration with Walt Disney Pictures. With the past Howard/Disney collaborations (Dinosaur and Atlantis) and the possibility of some bold adventurous pirate music in mind, this is a score many have been looking forward to. And while I have to admit it's not the score I had hoped for, it's still a good, and at times excellent, effort, with a couple of really great highlights.

The main theme is one of them. Presented in the first score track, "12 Years Later", and allowed to really shine in cues like "To the Spaceport", "The Launch" and "Jim Saves the Crew" this is a wonderful fanfare sounding theme. Howard's strong and busy writing for brass shines through, and coupled with choir and the rest of the large orchestra the statements of this theme are always welcome. And although the remaining themes aren't that strong, they are far from unmemorable and bland. There's a slow and peaceful theme heard for the first time in "12 Years Later", that resembles Howard's music for Snow Falling on Cedars. The Silver character has been blessed with a theme of his own. It's surprisingly low key and sad and appears in tracks such as "Silver Comforts Jim" and "Silver Leaves".

When it comes to orchestrations and sound the differences are fewer than the similarities, when compared to Howard's two previous Disney scores. The action parts, however enjoyable and rousing they are, are pretty much standard Howard stuff, with strong brass and percussion. "The Portal" and "Jim Saves the Crew" are the two large action cues and are actually very good, even if they, as already said, don't break new ground. As for the remaining parts of the score there is a great deal of quiet underscore - and this is actually the scores' largest drawback - making it a little hard to really focus on the music at times, especially since many parts have been heard in earlier scores by Howard. They sound awfully familiar, anyway.

Following the style of Disney's modern version of Stevenson's story, Howard adds an electric guitar to the mix in two of the tracks, "12 Years Later" and "Jim Saves the Crew". Although it gives these parts of the score a rather fresh and exciting sound it actually is a little too close to what Horner did for The Perfect Storm.

All in all Treasure Planet is perhaps Howard's weakest Disney score to date (Dinosaur still being the best), but since Howard is Howard the score is far from disappointing and contains some really good parts. The final track, "Silver Leaves", is one of the highlights with its upbeat jigs and optimistic statement of the scores' main theme. An excellent ending to a decent score.
Treasure Planet - 05/10 - Review of Tom Daish, submitted at 2010-09-26 20:17:12
Treasure Planet is boldly going where no treasure hunters have gone before and taking Treasure Island into space, even less traditional than the Muppet's hilarious take (with zippy Hans Zimmer score) on the Robert Louis Stevenson classic. The character design appears markedly similar to the ill fated Titan AE (which I actually thought was pretty good), particularly for the lead character, although the album cover art here is some of the most stylish I've come across this year. Despite the Disney marketing machine, I rather think it'll get swamped in amongst Potter, Lord of the Rings and Bond, but you never can tell. Despite equal billing with James Newton Howard, John Rzeznik, about whom I know close to zero, contributes only two songs. Both are MOR rock songs and enjoyable enough, I suppose we should just be grateful for anything that isn't a horrid ballad.

This marks James Newton Howard's third Disney entry and despite a couple of strong moments, turns out to be a little disappointing. After a quiet opening, 12 Years Later turns into a terrific cross between A Perfect Storm and Korngold on prozac, with an electric guitar obbligato supporting the brisk and brassy main theme. So far so good, Howard opened Atlantis and Dinosaur in much the same way. To the Spaceport follows a similar pattern of quiet opening proceeded by a more rousing section. After that, it all gets a bit disappointing. It turns to more ebb and flow animation scoring, just hitting dramatic points without much in the way of strong musical statement. Even The Launch (invariably a promising track title) doesn't quite muster up the requisite level of excitement. There is some jaunty jigging for Silver, although, again, this is disappointingly short lived.

Of course the film can't end without the obligatory action sequence and The Portal and Jim Saves the Crew provides just such an occasion. However the grand, vibrant adventure of Atlantis is replaced with more standard Howard action scoring, aside from a joyous reprise of the electric guitar combo from 12 Years Later. Silver Leaves is a pleasingly low key ending and one of the few quiet tracks that has a strong emotive quality. I said in my review of Atlantis that it didn't hold together as well as Dinosaur and so Treasure Planet doesn't hold together as well as Atlantis. That earlier score did have several truly stand out moments and considerably more variety, Treasure Planet does have a couple of enjoyable sections, but in the end it's just a touch disappointing.