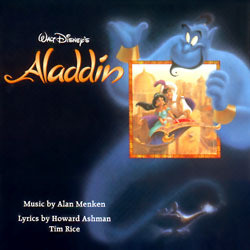 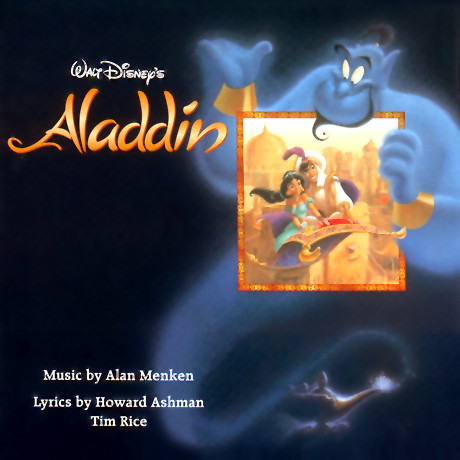 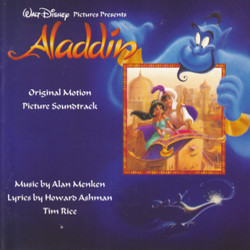 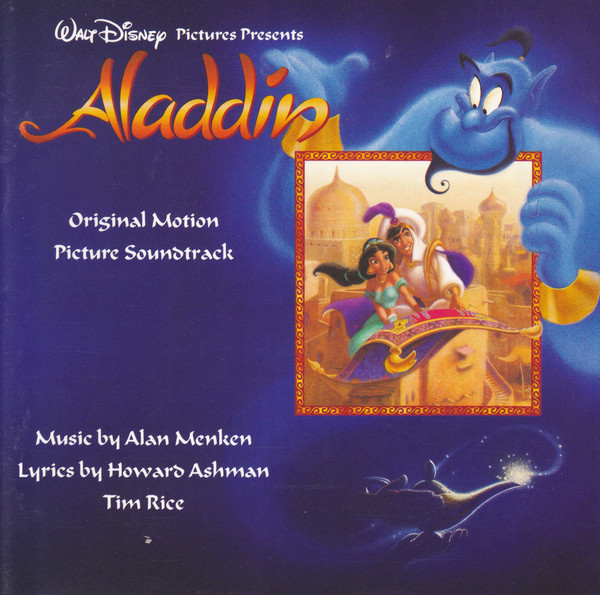 Show reviews in other languages
Aladdin - 08/10 - Review of Tom Daish, submitted at 2010-09-29 22:45:24
Aladdin marks the third in the triumvirate of Menken scored Disney films that, along with a new found technical mastery in animation, reinvigorated the flagging studio. While undeniable reaching a peak with Beauty and the Beast, Aladdin is an engaging and often hilarious magic carpet ride both in filmic and musical terms. Perhaps the biggest downside was the very sad loss of Howard Ashman, Alan Menken's lyrical partner of many years. As a result, several of the songs for Aladdin have lyrics by Tim Rice and while they are pretty good, the consistent wit and invention of Ashman is still often missed. Surprisingly, most Disney animated films don't rely on star power for their vocal talent, preferring less famous, but distinguished performers, however for Aladdin, they scored the services of Robin Williams and his vocal antics tend to dominate the film and some of the songs.

Aladdin is of course a sanitized version of the Arabian Nights story, crossed with a bit of Romeo & Juliet, with genies, sinister wizards and talking parrots. Menken's music only suggests the location on a few strategic occasions, notably the opening Arabian Nights, which briefly sets the scene, while Legend of the Lamp is spoken, extension to the prologue. The songs are otherwise in Menken's tried and tested Broadway style, with big tunes and thumping orchestrations, all supporting Ashman and Rice's nimble lyrics. I'm something of a sucker for the less famous songs from Disney films and prefer playful numbers such as One Jump Ahead over the more famous ballads, in this case A Whole New World, or even Williams' memorably athletic performance of Friend Like Me. As with all good songs in a musical, they serve to propel the story or introduce characters. One Jump Ahead introduces street urchin, Aladdin, Friend Like Me is a big band intro for the Genie and the martial Prince Ali focuses on Aladdin's alter ego, after the Genie loads him with wealth and status.

The film and score's big song is A Whole New World and as with most Disney love songs, has a pleasant, low key version for use within the film and a power ballad treatment for the end credits, in this case performed by Peabo Bryson and Regina Belle. The gentle, more sincere and less affected rendition I find preferable, but the latter is one of the best radio friendly pop arrangements from a Disney film. As for the underscore, Menken' work on the less serious films can try to follow every action too closely, but Aladdin is tuneful enough and the cute comedic moments rarely outstay their welcome. There are even some quite affecting moments, Jasmine Runs Away and Aladdin's Word are lovely. On the other hand, the action is exuberant, if a little busy on occasions, although The Ends of the Earth, The Cave of Wonders and The Battle are often thrilling and bounce along with such conviction that it's hard not to be swept along.

By its very nature, Aladdin would be hard to pin as one of Menken's finest works. Much of the film is played for laughs and although there is a good baddy, the solid drama of something like Beauty and the Beast or The Hunchback of Notre Dame is missing because the lead couple are a bit wet, fading into the background of Williams' irrepressible Genie. However, Menken, Ashman and Rice were still sufficiently inspired to produce plenty of memorable and often breathlessly exciting songs and Menken's score effortlessly mixes action, drama, a little comedy and a touch of exoticism. Whether the Academy should have honoured Menken with his third scoring Oscar is open to debate, it's good, but not that good. However, enjoyable, tuneful and memorable entertainment all the same.
Golden Globes: Best Original Score (Winner)
Oscars: Best Original Score (Winner)