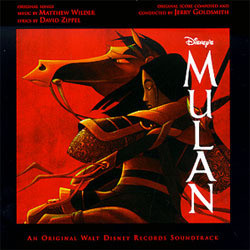 Show reviews in other languages
Mulan - 08/10 - Review of Adam Andersson, submitted at 2008-01-20 21:25:40
These months after the passing of Jerry Goldsmith are a time for remembering. I thought that I would do what I can to help remember this film music giant that so sadly has left us, with a couple of reviews highlighting some of his great works. The first in this little series was First Knight, and now it continues with Mulan, and so far I plan it to be three more: Planet of the Apes, Under Fire and finally Lionheart. I hope that this will honour the master’s memory and that it in some way will help us all to remember his fantastic music.

The choice of Jerry Goldsmith as composer for Disney’s 1998 production Mulan was perhaps not the most expected one. For some years, Disney had kept to a musical-like way of making animated films, all songs and scores being composed by Alan Menken, who even was awarded with four (!) Oscars for his work. But for Mulan, a story taking place in ancient China, Disney went another route. They hired Matthew Wilder to compose some songs, and hired Goldsmith to do the score. And as usual, he delivers. Mulan is indeed a rousing score with wonderful action writing, a fair share of sweeping beautiful moments, and some appropriate Chinese flavour.

Goldsmith did not, even if that could have been expected, incorporate the song themes composed by Matthew Wilder in his score. Instead he comes up with several strong themes himself, which the score revolves around. This is a very good thing – the Wilder song material is average at best, the song “Reflection” by far being the best. This song, as well as the song “Honor to Us All” was arranged by Goldsmith for the album release (I guess) to form a suite (“Suite from Mulan”) together with rich performances of Goldsmith’s two major themes. This suite is arguably the best track on the CD – Goldsmith’s great main theme has a slight Chinese feeling, and it gets a wonderful reading on oboe and then in full orchestra; and his other theme, supposedly a love theme of some sort, sounds like halfway between the Air Force One theme and his Star Trek First Contact theme, and the wonderfully sweeping theme gets a rich performance that rivals the main titles from the aforementioned First Contact. His arrangement of “Reflection” is also wonderful, sounding a little like the pastoral main theme from Star Trek Insurrection. “Reflection” also appears in three more forms on the album: both the film version, a solo violin version performed by Vanessa Mae, and a pop song version with Christina Aguilera. Quite over-represented, I’d say. A good enough song, yes, but not that good.

The two themes are richly represented throughout the score, together with a short, rather rousing action theme first heard one minute into “Attack on the Wall”. The main theme appears both lyrically on oboe like in “Mulan’s Decision” and as a powerful action theme in “The Huns Attack”. The thematic work is one of the score’s great strengths – the themes appear all over the score in different guises, and makes it interesting almost all the time. The other strength of the score is the rousing action music, it being very engaging, with some Chinese flavour at times and above all great dramatic impact. While Menken’s action music often was rather comical and playful, Goldsmith’s action music in Mulan is completely serious, sounding like music for any large scale epic motion picture. A very nice move by Goldsmith, preceding the later efforts by James Newton Howard for following Disney films.

Mulan has all the way a sound that is very typical of Goldsmith – the thematic treatment is very typical of Goldsmith with the wind solos and sweeping strings, as well as the action music, heavy on the brass and with some trademark electronic effects thrown in. The electronics is in Mulan very much in the background though, and the use of them in the action music reminds a little of his last Star Trek scores, but more held back then in those scores. The electronics are also used for some echoing Chinese-sounding effects, which works very well.

The commercial album release of Mulan is, as most Disney albums, much comprised of songs. Not only do we get the film performances of four film songs and the aforementioned reprises of “Reflection”, but also a quite out-of-place song with Stevie Wonder. In the end this leaves about 33 minutes of orchestral score on the 56-minute album, the suite with the orchestral song arrangements included. There are different versions of the Walt Disney Records album available, depending on release country, but they only seem to differ in the track order – the track order listed below is from the Swedish release. There is a “for you consideration” Academy Award promo of this score circulating in the second hand market, sold at ridiculously high prices, which features the complete 50 minute score. It is a shame that it is so hard to get hold of the complete score, regarding its quality, and the commercial release leaves out a lot, among other things the choral work Goldsmith wrote for the film. But there are however plenty of memorable moments on the commercial release. “Mulan’s decison” is a highlight, with its wonderful renditions of the main theme in various guises, as well as the very powerful “The Huns Attack”, a classic rousing Goldsmith action cue.

Overall, Mulan is not a very original score: it sounds rather similar to most Goldsmith scores of the late 90’s. In Mulan you can hear both Star Trek First Contact and Insurrection as well as The Mummy. But of Goldsmith’s late 90’s scores, Mulan is one of the more solid efforts; a very solid score thanks to its strong thematic material and the great action writing. Even if it is not a score to consider as one of Goldsmith’s masterpieces, it is a very good score and worthy of some attention as one of the more memorable efforts of Goldsmith’s last decade.
Mulan - 06/10 - Review of Tom Daish, submitted at 2010-09-13 20:16:40
It appears that Disney were getting fed up with Alan Menken not winning Oscars year after year and so they turned to a new team of artists for their latest outing. Matthew Wilder is a name I've not heard of before and to be honest, I'm not terribly surprised. His songs range from extremely mediocre to pretty good. The first and fourth songs start sounding really bad. To me, they sound more Japanese that Chinese, but rather too much like the cheesy Western ideal of that type of music. When they get going, they improve quite a bit and are actually pretty enjoyable in the end. The two standouts are Reflection and I'll Make a Man Out of You. The first is a typical, yearning Disney song where the heroine (in this case), puts across her hopes and inner feelings. This makes a nice change from the more outging Menken efforts and as the title suggests, is much more reflective and contemp lative than striving. My favourite song is I'll Make a Man Out of You. It is a superb, robust song that is well performed by Donny Osmand no less and a group of would-be Chinese soldiers. It certainly is the only one with an extremely memorable tune, although the others should get grained in with enough listens. I hope that Alan Menken returns eventually as he really gets the best out of the Disney musical format and while Wilder is good, he's not really a match for Menken. Another gripe is that the lyrics aren't especially witty. Where in The Hunchback of Notre Dame, Zippel produced long and complex songs, here he doesn't succeed nearly so well and the lyrics tend to get a little generic. Overall, I'd say that the effort doesn't quite compare with the recent Anastasia in terms of songs. Perhaps if they had been a little longer and more complex they would have come off better, but they just seem short and incidental rather than crucial. The Stevie Wonder song is awful, skip it at all costs, whereas the pop version of Reflection is just as good as the movie version.

Jerry Goldsmith's score will be the main thing that people will be buying this score for. This is hist first venture into animated films since his good, if not excellent Secret of NIMH score. I must admit that in the end it doesn't come off as well as I'd hoped. Goldsmith does stick to a more grown-up style for this score, unlike NIMH which had a tendency to sound rather excessively cute, which I found grating at times. The suite from Mulan is a very well arranged selection of the first two songs, but I can't seem to hear the other two songs in there. Whatever, it makes a good start to the score, although it does seem to be the only place where the songs and score mingle to any great extent. Goldsmith's main theme is somewhat akin to his Star Trek: First Contact theme (like quite a few of his grandious main themes of late it seems!). However, I don't feel that it, or the tunes from the songs appear quite as often as they might. The first few tracks are re ally quite slow and thoughtful and perhaps get a little bogged down at times for my liking. Perhaps a little bit more a mixture of styles would have helped. The best moments are in the last score tracks. The Huns Attack is a good action cue, although I don't think it quite matches the impressive precedent set by First Knight, nor is it as well constructed as the action cues on that. However, there are some great moments (and there are better action cues in the film that sadly didn't make it to the score). The Burned Out Village is very sobering and is a perfect musical realisation of the kind of desolation that is brought to a village during war. It does seem a little at odds with the end song afterwards since that is somewhat more upbeat, but otherwise it makes a fine conclusion to Goldsmith's efforts.

Perhaps the rating is a little harsh, but I just feel that this score has been ever so slightly overrated on the whole. Sure, there are some great moments, but the score and songs don't seem to intermingle. In fact, the score is almost two albums stuck together, with the score and songs not quite as inseparable as they are on most Menken efforts. Also, I don't think the combined efforts of Wilder and Goldsmith quite match those of Flaherty and David Newman on Anastasia, which to me had a much more striking score and songs that had a more substantial role in the story. However, it does make an enjoyable listening experience and Goldsmith is pretty much always worth listening to and the songs are worth hearing for Reflection and I'll Make a Man Out of You.
Golden Globes: Best Original Score (Nominee)
Oscars: Best Original Score (Nominee)