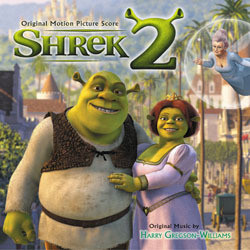 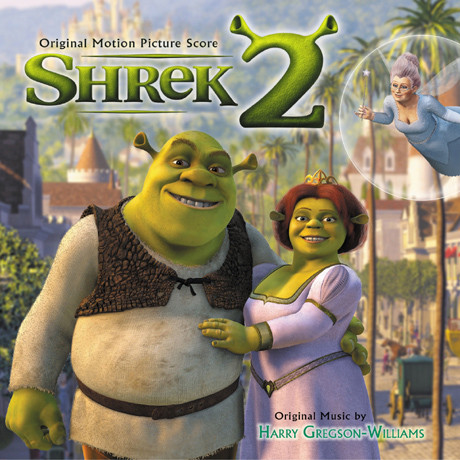 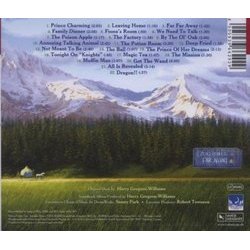 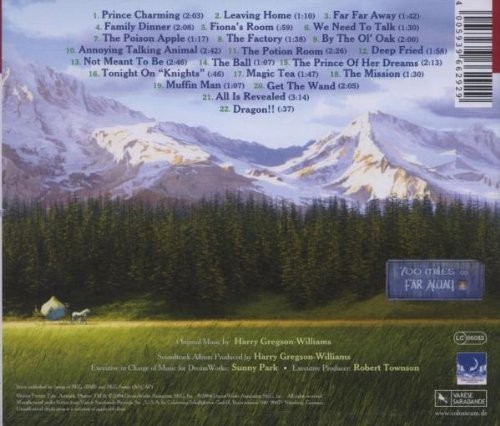 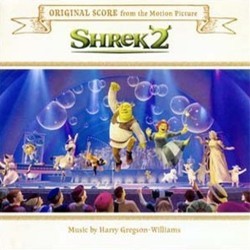 Show reviews in other languages
Shrek 2 - 05/10 - Review of Tom Daish, submitted at 2010-09-13 00:17:51
Like seemingly everyone, I really enjoyed Shrek and, first time around at least, Shrek 2 seemed a funny follow up. However, repeat viewings do neither film many favours, neither holding up terribly well once you've heard all the pop culture and reverse fairy tail gags. Sure, the romance between the green ogre himself and his princess is nice enough, but not a patch on the far more convincing and involving relationships set up in the films of CGI rivals Pixar. The box office receipts look impressive, but I think ultimately, the Shreks will date and wear thin a lot quicker (even if there are, purportedly, third and fourth films in production). John Powell and Harry Gregson-Williams seem to have unpaired from their successful relationship and Gregson-Williams has evidently landed the Dreamworks animated gig and thus tackles Shrek 2 as a solo effort.
I have noted elsewhere that John Powell's career has really taken off with some fine thriller and action scores. Gregson-Williams has penned (and co-penned) a few reasonable scores, but they don't have the imaginative zing of Powell's. His last animated score, for Sinbad, was high on bluster, but didn't have the great tunes that made his Powell collaborations such a resounding success and, in truth, the most memorable part of Shrek 2 remains the lullaby main theme (credited as co-composed with Powell). There are a couple of new ideas in the mix, notably a deliberately cheesy fanfare for the Hollywood styled land of Far Far Away - although I recall it being considerably more extensive and extensively used in the film itself. Elsewhere, there's a little guitar for Banderas' Puss in Boots (apparently to get a film franchise of his own - was the character really that funny?), plenty of light suspense and a little action, but what is most striking is how low key much of score is.

The opening few tracks are strong, notably the sarcastically uptight Family Dinner, but from then on, little of note occurs until The Potion Room. Maybe it's just me, but I rather expect my animated scores to be a little more, well, animated. Unfortunately, extended passages for creeping around pizzicato strings with little choral and woodwind interjections aren't hugely thrilling. Fortunately, it picks up somewhat toward the end with some fairly genuine emotional material in Not Meant To Be, some cheesily grandiose flourishes for The Ball, fun action in The Mission and Muffin Man and an excursion into urban TV music for Tonight on 'Knights.' However, for all that, Shrek 2 doesn't venture a great deal from the original (notably the largely retread action riffs) and, despite a consistent tone, still somehow feels disconnected and uninvolving for too much of the time. As with the original, pop/rock fills many of the film's major scenes, but where that score worked hard to fill the gaps effectively, here it just seems like filler. Not without a few moments, but a surprise disappointment.
Shrek 2 - 06/10 - Review of Andreas Lindahl, submitted at 2008-01-20 21:25:40
A solo project for Harry Gregson-Williams this time around - no John Powell to keep him company - the sequel to Shrek, cleverly titled Shrek 2, means basically more of the upbeat, tongue-in-cheek music heard in the first film. Even if the film's soundtrack, like the first one, is dominated by pop songs, Gregson-Williams' score is an important part of the film, setting the tone and creating smooth transitions between scenes. The usual stuff, really, but a score's function and importance often get more obvious when it has to compete with songs.

Stylistically the score is all over the place, jumping quickly from heroic fanfares ("Prince Charming") to Strauss sounding Waltzes ("Family Dinner"). But the score's diversity is also its largest problem. Imagine 22 tracks, with running times of around one to two minutes, where the style of the music changes from track to track, or sometimes even from bar to bar. The result is a very divided and onconcentrated listening experience. Even if many individual cues are excellent on their own, the result of collecting all tracks in one large pile isn't that great.

But it is a charming score, no doubt about it, and Gregson-Williams clearly demonstrates his diversity and flexibility as a composer. Highlights include the already mentioned waltz in "Family Dinner" and the big band version of the fairy tale theme in "The Ball" - great fun! The last four cues are also terrific, with the composer reprising most of the now familiar Shrek themes. "Muffin Man", for example, includes a bold rendition of the major action, or dragon, theme, while "Get the Wand" is an exciting and lively action piece. Some beautiful, lush music - there's a short but lovely piano solo, for example - dominates "All is Revealed", which actually is the longest cue on the disc - 3 minutes and 17 seconds.
The fairytale continues as everyone's favorite ogre faces his greatest challenge of all - the in-laws - in SHREK 2! Shrek and Princess Fiona return from their honeymoon to find an invitation to visit Princess Fiona's parents, the King and Queen of the Kingdom of Far Far Away. With Donkey along for the ride, the happy couple ventures off on a whirlwind of new adventures with a host of new fairy tale characters to lampoon along the way.

Mike Myers, Eddie Murphy and Cameron Diaz all returned from the original SHREK and were here joined by Antonio Banderas, Julie Andrews, John Cleese, Rupert Everett and Jennifer Saunders (as the scene-stealing Fairy Godmother) for the most loved motion picture of the year.

SHREK 2 is a classic in every way. The much-loved music score by Harry Gregson-Williams (who also returns from the original SHREK) is finally available.