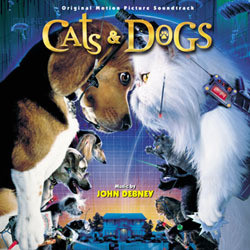 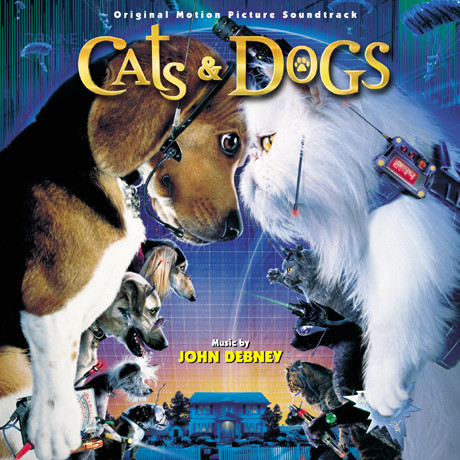 Cats & Dogs - 04/10 - Review of Tom Daish, submitted at 2010-09-11 08:47:01
The makers of Cats and Dogs must be really annoyed that The Truth About Cats and Dogs had already been taken as a film title, since it would have been perfect. Having said that Nice Concept, Shame About the Film would have been a much better title. The sad think about Cats and Dogs is that the basic idea - cats and dogs are waging a secret war - is quite a nice one for a family film. It's a pity that it bogs down into drivel formula story telling and is mired in hopeless amounts of sentimental crud. Even worse that they resort to cats and dogs being able to do things they couldn't do even if they wanted to - like typing and building large underground bases. How much more fun it would have been had they been inventive enough to give the animals gadgets that were even a little plausible.
The unfortunate thing about films like this is that the lack of ambition invariably extends to the score. John Debney seems to get stuck doing films where having no distinct musical personality is a bonus and if that isn't really sad, I don't know what is. The secret agent type twist to the film of course means Mission: Impossible style funky rhythms and the Main Titles don't disappoint. The set up for something a little inspired seems there, but of course all things in family films must turn to sugar so we get Pseudo Marc Shaiman Sentimental Theme #34 in Lou the Dreamer, notably reprised in one of the most clichéd finales and vomitous finales to any film I've seen.

The villain, Mr Tinkles - who they seemed to think would be a cat version of Doctor Evil, despite being entirely unamusing and not terribly evil - is given a mincing harpsichord theme, which would be fun if it hadn't already been done to death. There are enough ideas to keep the album interesting, the banzai style of Kung-Fu Kats is fun if expected, although Debney's over the top orchestration gives an appallingly choreographed sequence at least a little vibrancy. The spy type funky bass line appears quite often and gives the score a bit of cool - if only he'd manage to stick to this rather than get bogged down in the sentimental mush which dribbles painfully all over the final few cues.

As soundtracks go, there are certainly vastly less entertaining ones, but there are also vastly more original ones. I guess it's too much to expect something very original in family films these days, but with a film this insipid and a production team so low in its aspirations, it's amazing that Debney's score is as much fun as it is. Enjoyable, but immediately dispensable.
Cats & Dogs - 06/10 - Review of Andreas Lindahl, submitted at 2008-01-20 21:25:40
John Debney has written some highly entertaining scores for comedy, or family, films. His music for Hocus Pocus, Little Giants and Liar Liar offer some of the composers' best music in the genre. However, his score for Cats & Dogs, although with some good material, fails to impress. Mostly because it's so incredibly schizophrenic and chaotic. When it comes to sound and style, this is typical Debney comedy music. Brassy, bouncy and lively and diverse. It's actually a little too diverse and leaning a little too much on slapstic and mickey-mousing. Musical ideas planted are never allowed to grow. What starts out as an excellent theme or motif are all too soon interrupted by totally different material. And sometimes a totally different genre of music. All making it hard to really concentrate on the music for a longer period of time. Over all it makes for an exciting listen, but one can't help to feel a little shizoprenic and frustrated.

Groovy "making plans" music with tongue in cheek references to Mission: Impossible and James Bond can be found in a large number of cues ("Main Title", "Meet Mr. Tinkles/The Formula" among others). Coupled with extensive use of electronics this gives the score a very high tech sound at times, which often feels very appropriate, and also quite attractive.

The highlights are the more gentle cues, such as the charming "The Neighborhood", which offers some happy, feel good, small town Americana music. I have always been a big fan of that kind of scoring. There is also some slower, more relaxed music in "Lou the Dreamer", introducing a gentle and attractive theme for Lou, the films' main character, but that's pretty much it. The reason, of course, being the nature of the film. This is a type of film that rarely allows the composer to focus on soft, melodic writing and coherent musical ideas, since every action on screen "have" to be accentuated by the music. It's also music that often works better in the film, than on CD, since so much of the music and its unexpected twists and turns just doesn't make sense on its own.