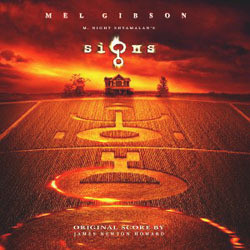 Show reviews in other languages
Signs - 08/10 - Review of Tom Daish, submitted at 2010-09-26 20:16:22
James Newton Howard's reputation has just been growing to the point where he is now one of the most in demand composers in town. His ability to skip between genres is impressive, moving from Disney to creepy, post modern horror and even managing a few more standard action outings in between. I always thought of Howard as a composer with no real style of his own, but I rather feel I was hasty in this assessment. While he doesn't have a radical musical personality of Danny Elfman, Elliot Goldenthal or Thomas Newman, he certainly does have one and it is becoming more evident as his body of work grows. One of his most successful partnerships of recent times has been with M Night Shyamalan where he helped immeasurably reinforcing the creepiness of The Sixth Sense and Unbreakable.

Signs is a sort of updated Close Encounters for a more paranoid and naval gazing age, although here the aliens are largely in the background and the film focuses mainly on Mel Gibson's character and his family. Still, Shyamalan is a director who enjoys instilling a sense of unease in his audience and between unseen potential dangers with potent silence, the use of music becomes even more critical. For what becomes a relatively quiet first half, the brief Main Titles are a thrilling Bernard Herrmann inspired flurry of strings and booming brass, that has an intensity that comes as a surprise. What only becomes clear after a few listens to the whole score is that almost all of it is based on a simple cyclical motif, but employed in various orchestrations and with varying density. In the hands of a less skilled composer, this could render the score tedious and repetitive, but Howard has enough tricks to prevent it becoming tired.

The first few tracks play the main motif as though it is being echoed, perhaps the only disappointing side effect is to render it stylistically similar to Mark Snow's X-Files main theme. Also, a few too many of the early tracks seem to start the same, although they invariably go off on their own tangent. One of the smartest moves by Howard is to not always maintain an entirely spooky atmosphere. In the Cornfield turns it alternately major and minor, suggesting a little more humanity. However, the intensity does build and the more explosive moments are utterly compelling. Howard's action music is usually good, but the level of invention on display here is remarkable, especially since most of it is, again, derived from the same central idea. The Hand of Fate Part I is a brutal assault on the senses, but is still totally musical - it would have been so easy for it to descend into a chaotic mess.

While the obviously brilliant parts show their brilliance from the outset, the album as a whole requires more careful listening. Yes, the first half is quite quiet, but Howard rarely allows the music to become directionless and while it has a similar feel, the mood and pace change frequently enough to avoid the album from flagging, which it so easily could. A couple of tracks probably should have been omitted - for example, Baby Monitor is largely redundant being both short and revealing no new ideas. The recording quality is notably superb, the brass is rich and vibrant during the exciting later cues and makes appreciating the attention to detail of the inner orchestral parts easy. For all that, it's one of those impressive efforts that combines plenty of atmosphere, with enough melodic material and such is highly recommended. Oh yes, the cover art is most appealing.
Signs - 08/10 - Review of Andreas Lindahl, submitted at 2008-01-20 21:25:40
With the score for Signs, composer James Newton Howard and director M. Night Shyamalan continue their succesful collaboration. Similar to the scores for the the previous films by Shyamalan, The Sixth Sense and Unbreakable, Howard's music for Signs is a creepy, uneasy and restrained work, dominated by strings and woodwinds, with subtle piano and brass. The score is not especially thematic, but instead relies more on texture and mood - somewhat minimalistic in its construction, actually. There's a lot of cues that remind me of composer John Adams - little string and woodwind figures repeated over and over again. It may sound boring, but it certainly isn't. Signs is a very rythmic score that might not be that easy too digest on your first listen, but give it some time and your reward is a very emotional, memorable and complex score.

In keeping with the already mentioned John Adams technique, large portions of the score revolve around a simple musical figure, or motif, presented for the first time in the excellent "Main Titles" cue. It's basically a repeated ascending three note phrase performed by woodwinds, supported by scratchy violins (reminding me of Elfman's score for Sleepy Hollow) and muted brass. As the scores' main building block, this motif, or variations of it, show up in quite a number of tracks on the CD and the motif is really allowed to shine in the two last tracks - "The Hand of Fate - Part I" and "The Hand of Fate - Part II" - two excellent cues that create a very emotional and bombastic ending to the album. Especially the climax in "The Hand of Fate - Part I" is really excellent and memorable, and makes me think about The Sixth Sense - a score that is really restrained, until the final cue really sweeps the listener away with its orchestral grandeur and emotional impact. Signs works the same way.

I have only briefly mentioned the "Main Titles" cue. It deserves more than that. Together with the two closing tracks, the "Main Titles" is the highlight of the entire disc. And the way it is heard, and used, in the film is just extraordinary. It's short - not even two minutes long - but in this brief time Howard manages to set the tone of the entire film and score. Wonderful stuff.

Moments of dissonance can be found as well, like for instance in the very end of "Brazilian Video", but it luckily never gets out of hand. Signs is, above all, a subdued score that focuses on texture rather than trying to scare the listener out of his, or her, pants with the help of noise. And it succeeds. This is a perfect score for late night listenings. Not only because of the many scary elements, but also because of soft and relaxing, but still mysterious, cues such as "Recruiting Office" and "Throwing a Stone".

And with a total running time of around 40 minutes, the score never gets repetetive or uninteresting. If you like what Howard did for The Sixth Sense and Unbreakable, chances are that you will really enjoy Signs. If you like John Adams and Bernard Herrmann as well, you'll love it.