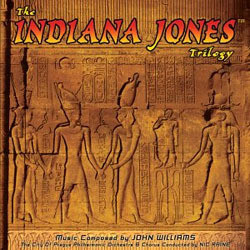 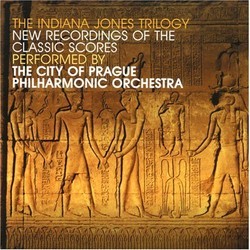 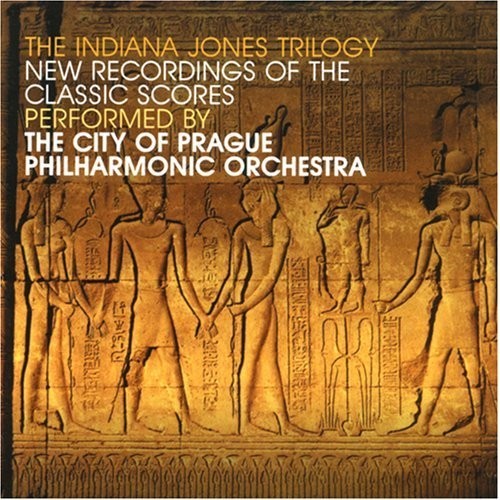 Show reviews in other languages
The Indiana Jones Trilogy - 04/10 - Review of Tom Daish, submitted at 2010-10-02 13:35:14
Although the music for the original Star Wars trilogy gets most of the attention, it is easy to forget that Williams did some sterling work on Spielberg's Indiana Jones trilogy. Although they don't have the musical story arc of Star Wars, they contain some of Williams' best writing in their own right. They are also interesting as they cover a greater period of the composer's working life; Raiders of the Lost Ark in the middle of his epic period from Star Wars to Return of the Jedi, to the enjoyable, but less famous mid-80's when Temple of Doom was written and then a slightly smoother approach at the turn of the decade for Last Crusade. To date, this presents the only album devoted to presenting the best of the Indiana Jones trilogy, but unfortunately, Silva Screen doesn't deliver the goods as successfully as they have been doing.

As I invariably seem to end up commenting, there are some composers the City of Prague players are adept at performing, most notably John Barry, but there are some that they really struggle with and Williams' music unfortunately represents some of their least inspiring moments. His music is difficult music, whatever you say about his writing, it's rarely simple, no matter how easily it flows while listening to it. It also makes heavy demands on the brass and it is in this area that the Indiana Jones Trilogy comes a cropper most obviously. The opening performance of the shorter prelude arrangement of the Raider's March isn't bad, although compared to the LSO original, the less sophisticated playing is evident. The Map Room: Dawn is also rather good, the choir always do a good job on Silva recordings and this is a faithful and suitably epic version, worthy of the original and put to mind just how much it sounds a bit like a choral version of some of Goldsmith's V'Ger music from Star Trek: The Motion Picture.

The Basket Game and Airplane Fight are exciting and the tempos well maintained, although the brass still lack crispness, they seem unable to maintain a consistent volume, so one note might be uneasily louder or quieter than the last. Temple of Doom starts with a rather booming version of Williams' arrangement of Cole Porter's Anything Goes, sung in Cantonese and even featuring some tap dancing as on the original, although in this case it just sounds laid on top, the integration isn't good at all, undoubtedly not aided by the recording quality. Nocturnal Activities and The Mine Car Chase are reasonable, especially the latter given its relentless pace and fiendish complexity, a truly surprising and pleasing display of good playing. The Finale & End Credits are, I think, an older recording and the results aren't very convincing.

Indy's First Adventure was undoubtedly one of the highlights of Last Crusade and while it doesn't have the precision of the original, it is perhaps more buoyant and reckless, which works well. No Ticket and Keeping Up with the Joneses makes a nice pairing, indeed the choice of music and the editing cues are both well considered. However, the sloppy performance of the finale suite from Last Crusade is not a good way to end, although in practice it doesn't, as an English version of Anything Goes receives that honour, but since the backing is exactly the same as the other, there isn't really any improvement. Despite a couple of high spots, The Map Room, The Mine Car Chase and Indy's First Adventure, the blaring sound from yet another brash, but booming mix, which does the performance no favours whatsoever and the often disappointing performance mean this is not an album I can easily recommend to even an Indiana Jones novice and impossible to recommend if you have the original score albums. There is no previously unreleased music here, which is doubly disappointing. Roll on expanded releases for Temple of Doom and The Last Crusade, that's all I can say.