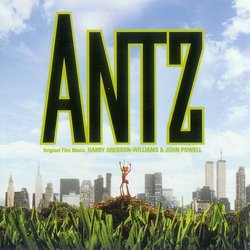 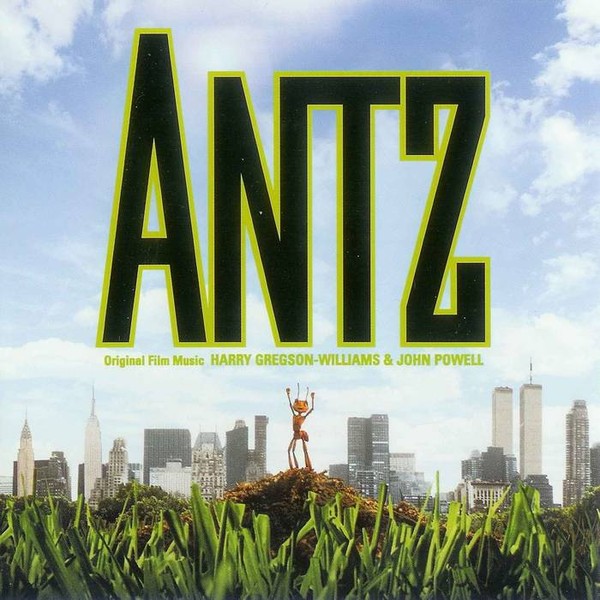 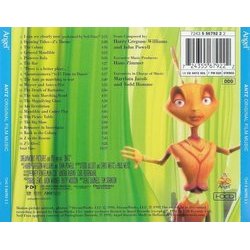 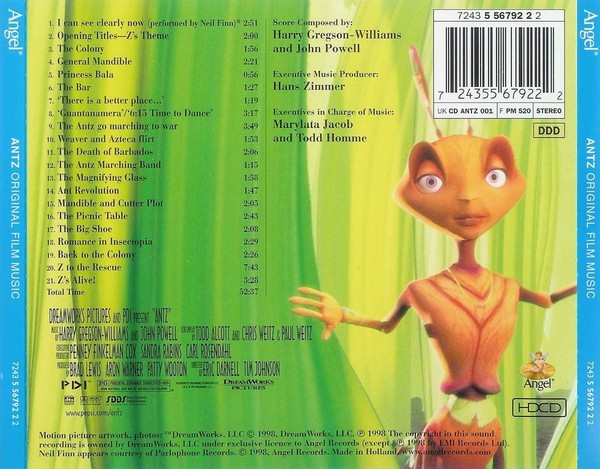 Show reviews in other languages
Antz - 08/10 - Review of Tom Daish, submitted at 2010-09-13 00:25:11
I think this has to go down as probably the grooviest score of the year. I would not normally have many kind words of comment on the music of either of the composers of this score, but by giving them something other than another godawful action pic, Dreamworks gave them a great political satire about ants, starring the most neurotic hero of the year (thus someone I could relate to....) in the form of the voice of Woody Allen. To accompany this tail of excitement, social revolution, romance, subterfuge and more ant gags that you can throw a stick at, Gregson-Williams and Powell have created a multi-faceted score that is often rather schizophrenic, but not to the point of distraction. It probably bears better comparison with Danny Elfman than anyone else, although unlike recent Elfman efforts (most notably Flubber), Antz remains tuneful and never gets too caught up in its own sense of fun, something that Elfman seems to have forgotten of late. Antz is brimming with themes which always helps and while there isn't a great deal of variation in them, mostly performance changes, there are enough to keep the interest up throughout.

The opening title introduces Z's Theme which is a laid back piano ditty that, like the character, isn't quite sure of where it's going. I know that sounds like a silly explanation, but hearing is believing, I think. The theme for the Colony is a very industrious tune with bouncing bass line with a whistled worker theme that perfectly sums up the ant colony as it is at the beginning. The opening of that track has a few arpeggios that seem to echo Philip Glass's music to Koyaanisquatsi, whether by mistake or not, it seems like quite a natty thing to have included! Princess Bala and General Mandible don't have very strong tunes, although the almost Patton-like hymnal approach to Mandible's music is entirely appropriate, especially in Mandible and Cutter Plot. The mystical world of Insectopia gets its own theme which introduces a suitable mysterious and epic tone to what is essentially a rubbish bin. The Picnic Table not only has the Insectopia theme, but also introduces a wonderful theme for the wasps that Bala and Z meet on their adventures outside the colony. It calls to mind the Flower Duet by (I think, but am not at all sure) Delibes. Whatever, it does help to perk up the latter half of the score as by then all the other themes have been introduced and something else is needed.

The most interesting music is generally toward the beginning, for my money. The Colony is a particular standout. The use of Guantanamera (which you might not have heard of, but will probably recognise) is inspired, especially when Z and Bala do their Saturday Night Fever bit. The Antz Go Marching to War uses the rather unsurprising choice of When Johnny Comes Marching Home and while this works just fine, it doesn't have the cool variations that Goldsmith managed with Small Soldiers. The end of that cue details the brief battle with the termites and is actually quite scary, at least of what is essentially a kid's film (although I think the entire thing is wasted on most kids, but still). One of the most delicate sections of the score is the death of Barbados, which is remarkably touching without becoming cloyingly sentimental.

Perhaps only in the penultimate cue does the score become a little more mundane. The cue is much more extended than most of the others (almost 8 minutes compared to an average of 2 or 3 minutes) and it doesn't have enough structure or inventiveness to quite compared. However, it is a minor quibble as the rest is absolutely great fun and will always be able to put a smile on your face!
Antz - 10/10 - Review of Andreas Lindahl, submitted at 2008-01-20 21:25:40
Do you like music that makes you feel good, and makes you smile? Do you like samba and conga music, well latino music in general? Do you like goofy orchestrations (elephant and antelope horns)? If you do, I believe this is the perfect score for you. It's written by Harry Gregsson-Williams and John Powell, both members of the Media Ventures team, for the CGI animated film Antz.

Antz is packed with music that will cheer you up and make you wanna get up and dance. It's been a long time since I had so much fun while listening to a score. Right from the start you know that you are in for some very special 50 minutes. The album opens with a punchy samba chord, followed by a jazzy piano theme, something you expect to hear in a piano bar, but with the exception that it's supported by congas. The second track is one of the highlights. It's a conga inspired cue, with brass, congas, rapid strings and a very exciting whistle-while-we-work theme, which of course is... whistled. The music then goes on like this - very goofy and catchy, latin-american sounding and most of all entertaining and good. We are given a strange rendition of the song "Guantanamera" in the track "Guantanamera/6:15 Time to Dance". It's hard to describe it. Imagine a saxophone playing the Guantanamera melody in a very staccato way, and supported by percussion playing the rythm from the Queen song "We Will Rock You" (If you have seen the film you know why it sounds like that). There's some goofy marching music in "The Antz Go Marching to War", with the antz singing "The Antz Go Marching One by One! Hurrah, hurrah!" and some snare drums and bold brass. There's also some superb action music in the middle of the album. Think the well-known Media Ventures action music but with a latin twist. Swap the electronic percussions and rythms for some congas and mambo rythms, and you get a pretty good picture of what it sounds like. If not, I can inform you that it's good, if not splendid. To make the soundtrack complete there are also some more soft and relaxing music included. "Weaver and Azteca Flirt", for instance, is a superb salsa/jazz cue with a groovy saxophone, piano and those cool congas. "The Death of Barbados" is a soft and sad cue for flute, choir and subtle low percussion.

The music is very melodic and is full of memorable themes you will hum for days. There's Z's theme, for instance. A relaxing little jazzy theme; We have the soft clarinet theme for Princess Bala and the already mentioned whistle theme. Plus a couple of more themes and motifs, all making the album a very entertaining listen - there's always something you will really enjoy waiting around the corner.
Antz - 08/10 - Review of Thomas Jenkins, submitted at 2022-01-29 16:34:20
Extremely groovy and fun, this is one of the most wildly unique scores out there.
The music of this soundtrack was used in: