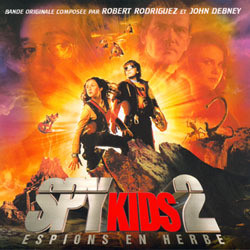 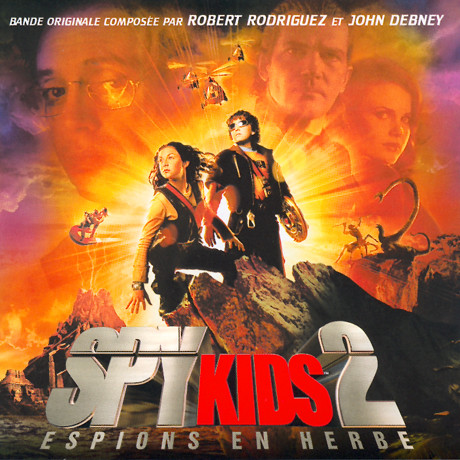 Spy Kids 2: Espions en Herbe - 06/10 - Review of Tom Daish, submitted at 2010-09-11 09:25:58
While it's not unusual for two or more composers to work on a score and come up with great results (see Messrs. Gregson-Williams and Powell), it's not very often that one of the composers is the director of the film (not to mention writer, editor, production designer and director of photography). The first Spy Kids film was a great blend of junior spying and family values, which could have been a recipe for disaster, but was a great success. Whether Rodriguez's ever so slightly manic need to fill most of the major individual tasks involved in making a film was entirely necessary is another question, but when it comes to composing, he is no John Carpenter, which in this case is a definite plus. In fact, it almost seems that John Debney is playing the supporting cast role of co-composer.
The biggest risk of having two composers is when conflicting styles don't mesh properly and there is a disjointed feel, one only need listen to Last of the Mohicans to demonstrate just how different two composers can differ wildly to the same material. From what he says in the liner notes, it appears that Rodriguez came up with the themes and Debney wrote everything else based on those themes. Quite how much arranging and adapting Debney did isn't clear, but the track listing gives a track by track credit to one or both of the composers suggesting that Rodriguez wrote his cues on his own. However, given the dozen or so orchestrators listed elsewhere, it is evident that both had quite a bit of help. There is a promising main theme, introduced in Magna Men, but it isn't expanded or repeated enough to really make the impact it deserves. A shame since it has the potential to be a great main theme, it is simply under used - a surprising complaint when so many scores simply repeat the main theme endlessly. In the brief liner note, Rodriguez comments how his musical abilities are a little limited and Debney expanded his bold, simplistic tunes. It is perhaps regrettable that they are not more in evidence.

This is a score of enjoyable vignettes more than anything; the witty R.A.L.P.H. for Juni's robotic helper is great fun, Escape from Dragon Spy has a fun rhythmic opening, Debney's Skeletons and Creature Battle both pay homage to Bernard Herrmann's Harryhausen adventure scores and the brief Floop's Dream is a curious, short, but fun song that echoes Danny Elfman's Floop Song from the original. The album closes with Alexa Vega (who plays Carmen) performing Isle of Dreams using the Floop's Dream theme as a funky rock/pop number. It summarises the biggest flaw in the score, it's got some good ideas, but doesn't succeed in successfully developing them, the result is that the song is disappointingly brief, although Vega's performance is terrific. A bold, colourful and exciting score, but one that doesn't quite pull itself together into the cracking score it really ought to be.
This soundtrack trailer contains music of: