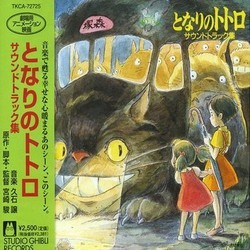 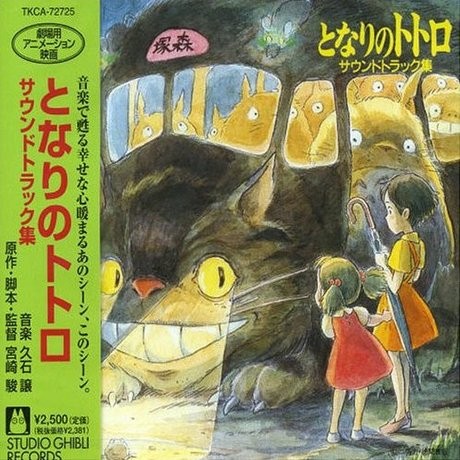 となりのトトロ - 08/10 - Review of Tom Daish, submitted at 2010-09-15 07:41:02
With Spirited Away and Princess Mononoke, the worldwide currency of Studio Ghibli and director Hayao Miyazaki have increased immensely. The scores for those movies also brought Joe Hisaishi to the attention of soundtrack collectors, his tuneful and lush orchestral scores being just the kind of thing the average collector is on the look out for. Unfortunately, the rest of his catalogue seems to be quite difficult to come by, with ebay being largely the only option (although the UK iTunes store has a surprisingly decent selection) aside from importing CDs directly from Japan. This is a great shame as there is a wealth of music to discover as his music for the earlier My Neighbour Totoro proves.

Those expecting the more adult themes of Princess Mononoke or complex fantasy of Spirited Away might find My Neighbour Totoro a little more juvenile; two girls move to the country with their father while their mother ails in hospital with some unspecified disease. Totoro of the title is a forest spirit the girls meet who pops up like an imaginary friend (one wonders whether this is intentional). There is no epic adventure, just a light character piece with a little fantasy and of course some lovely animation. As ever, Miyazaki makes the girls delightful, but not cloying, allowing them to act like children but without them being bratty or annoying. He imbues them with a realistic sweetness that a lot of American movie makers would do well to learn from.

For whatever reason, and in common with many of his Ghibli scores, Hisaishi's music has seen several releases, all about as difficult to find as each other. This particular release is a symphonic suite of eight tracks that plays twice on disc, once with narration, once without. Of course, those unable to speak Japanese won't find much of interest in the narration, but the music itself is typically wonderful. Stroll is another in what seems like a long line of witty marches that Hisaishi has composed; not quite a toy march, but injected with a playful childlike quality, not to mention a thumping good tune which is passed around the orchestra from amusingly pompous to the lightest pizzicato variation. Stroll in May introduces a Gershwin-esque jazziness that is most appealing, a style that is reprised in Catbus (one of the film's most lively inventions).

Of course, this is a film about two girls exploring their new world and so there are some lighter moments such as Travelling Soot where Hisaishi's delightful way with woodwinds is brought to the fore while The Path of the Wind is rather more soaring fantasy for one of the film's most memorable sequences. Unfortunately, due to the way the album is put together, there are only 24 minutes of music and omits the two songs that bookend the film (although the melodies are featured in the opening and closing tracks). However, as a symphonic suite, there's absolutely no padding and it's a delight from beginning to end. Given that any of the releases are liable to be difficult to find west of Japan, I highly recommend picking up whichever you come across. The other versions may contain more music, but this disc features all of the score's most important material and beautifully arranged into a delightful ballet.

Other releases of My Neighbor Totoro (1988):

Soundtracks from the collection: Anime