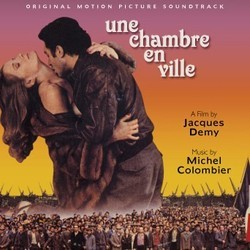 Kritzerland is proud to announce its latest release – a 2 CD set limited edition soundtrack to Jacques Demy’s Une Chambre En Ville. One of Mr. Demy’s least-seen films, Une Chambre En Ville was made in 1982, played only a handful of dates, and then disappeared, and has never been available on home video. But for anyone who loves Mr. Demy’s unique world, the world that gave us The Umbrellas of Cherbourg and The Young Girls Of Rochefort, the score to Une Chambre En Ville will be a major discovery.

For whatever reasons, Mr. Demy did not use his normal collaborator, Michel Legrand, for this score – instead he turned to another Michel, this time the amazing Michel Colombier, who had not only scored a large number of French and American films, but who also had done a series of wonderful pop albums.

Like The Umbrellas of Cherbourg, Une Chambre En Ville is through-sung. The music is gorgeous, filled with memorable themes – lush, symphonic, and filled with emotion. Une Chambre En Ville was a darker film than Umbrellas or Rochefort, and therefore Colombier’s score is more dramatic and serious in nature. It is a major work, and if you love Umbrellas you will love this.
The 2 CD set has great stereo sound, and every note of music from the film is present.