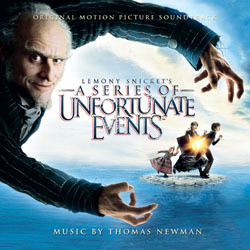 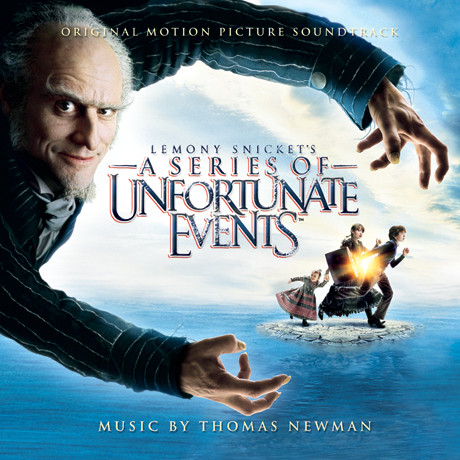 Show reviews in other languages
Lemony Snicket's a Series of Unfortunate Events - 07/10 - Review of Tom Daish, submitted at 2010-10-02 10:55:18
Based on the first three of the Lemony Snicket books by Daniel Handler, the story does indeed follow a series of events that start from the tragic (death of parents in a house fire) and then sees the orphans through events of varying levels of misfortune. It seems like a tale ripe for the Tim Burton treatment (I'm thinking Big Fish whimsy, Edward Scissorhands melancholy with the grimmer overtones of Sleepy Hollow and The Nightmare Before Christmas), however the big screen version rests with director Brad Silberling and Jim Carey as odious Count Olaf. Silberling's biggest hit to date is the big screen version of Casper, which was a surprisingly decent big screen adaptation of a mildly grim (essentially about a dead child) and thin premise. In that instance, James Horner provided some melodies that ranged from spooky to gorgeous to a little light Korngold. Although, - in keeping with the Burton potential - Danny Elfman seems the ideal composer here, Thomas Newman can do quirky as well as anyone and with Finding Nemo showed far greater affinity for family entertainment than anyone expected.

A laugh, a little fanfare and a close harmony female chorus, reminiscent of an MGM musical, open the score, but a more typical mixture of off the wall Newman instrumentation soon takes over as the score dissolves into rather less cheery territory. Had the film gone to a brand X live action Disney type director, we might have ended up with a solid, traditional, if unspectacular orchestral effort from John Debney or David Newman. However, this Newman goes for a surprisingly introvert approach much of the time and many tracks are simply the core instrumentalists with a smattering of strings and other plucked instruments. While never menacing in a horrific way, the strings suggest more than a little macabre malevolence, particularly when Newman adds pizzicato to his already rather edgy mixture of plucked instruments. As ever, with so many tracks, it's hard to comment on them all, but many stand out, notably the wonderful string rolls of Puttanesca or the hilarious quasi Bavarian accordion music of The Marvellous Marriage.

At a shade under sixty nine minutes, A Series of Unfortunate Events is, I am quietly confident, Newman's longest album to date. However, a few judicious omissions might have been wise; tracks such as Concerning Aunt Josephine are typically atmospheric, but a touch repetitive and wouldn't be missed. Having said that, these more incidental tracks pass quietly and it's never long before Newman breaks out some more vibrant flourishes. Indeed, while the first half isn't always entirely engrossing, the second half is pretty well consistently inventive, tuneful and tracks such as Cold as Ike, Hurricane Herman, The Regrettable Episode of the Leeches and the full version of the opening chorus appears in Loverly Spring are stand outs. Even so, not quite as memorable or engaging as Finding Nemo largely because of the longeurs early on, although only less fun because of the grimmer tone. For all the plentiful enjoyable moments, it doesn't all stick in the mind in quite the same way, but as with most Newman scores, well worth seeking out and with more than enough vibrant, tuneful and enjoyable moments to savour.
Lemony Snicket's a Series of Unfortunate Events - 08/10 - Review of Andreas Lindahl, submitted at 2008-01-20 21:25:40
Nominated for an Academy Award, Thomas Newman's score for Lemony Snicket's A Series of Unfortunate Events is a 70 minutes long showcase of complex rythms, textures and unusual orchestrations. Based on Daniel Handler's books, the film has a certain quirkiness, which is perfectly mirrored in Newman's score. People familiar with the composer's other scores will probably not find anything new or fresh in Lemony Snicket, with its overall sound resembling his music for Finding Nemo, Angels in America and Meet Joe Black. But Newman's usual bag of tricks are often quite appealing listening to (with some exceptions) and despite the score's focus on rythm, and less focus on melody, Lemony Snicket manages to impress.

It's not an especially uplifting score. Often quite dark and brooding, it's packed with staccato-filled ostinatos, pizzicato strings and other types of plucked instruments. As usual, Newman uses everything but the kitchen sink as his percussive section and this really makes the score dance, always with a strong sense of motion and urgency. The textures are complex, the ideas many and the themes few, which makes for an extremely varied and diverse score. Perhaps too varied and diverse. Ideas are presented, but often quickly abandoned, never to return again.

Highlights include "Resilience", which features a typical slow Newman theme, performed by piano and soft strings. Very beautiful. It returns again towards the end of the score, in "The Letter That Never Came", once again performed by piano, but backed up by the entire orchestra. With it's orchestral and melodic power, this cue will remind the listener of the composer's music for Meet Joe Black and The Shawshank Redemption. Excellent music. "The Reptile Room" is an impressive display of orchestral grandeur, with wet, staccato strings, exotic percussion and flutes. "The Marvelous Marriage" is a silly, but entertaining, little accordion based ditty, while "Loverly Spring" - which also appears in the opening track, "The Bad Beginning" - is a completely bizarre little song. Absolutely hilarious, in complete contrast with the rest of the score.

All in all, Lemony Snicket's A Series of Unfortunate Events, is an impressive score, which I enjoy because of it's complexity more than anything else. The long running time, short cues and diversity makes it a little tiresome to listen to at times, but in the end it's a solid effort by Newman.
Oscars: Best Original Score (Nominee)
World Soundtrack Awards: Soundtrack Composer of the Year (Nominee)

Other releases of Lemony Snicket's A Series of Unfortunate Events (2004):