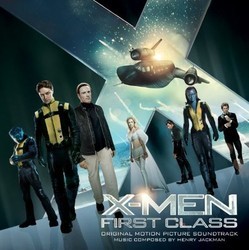 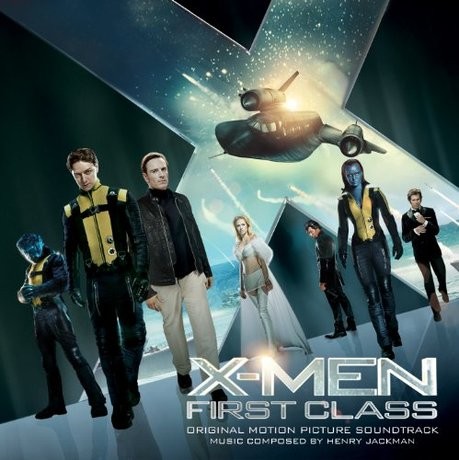 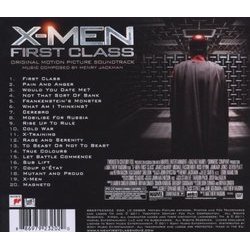 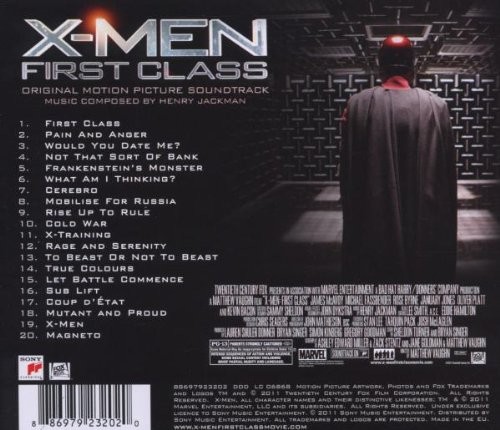 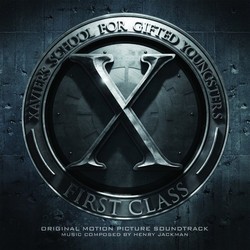 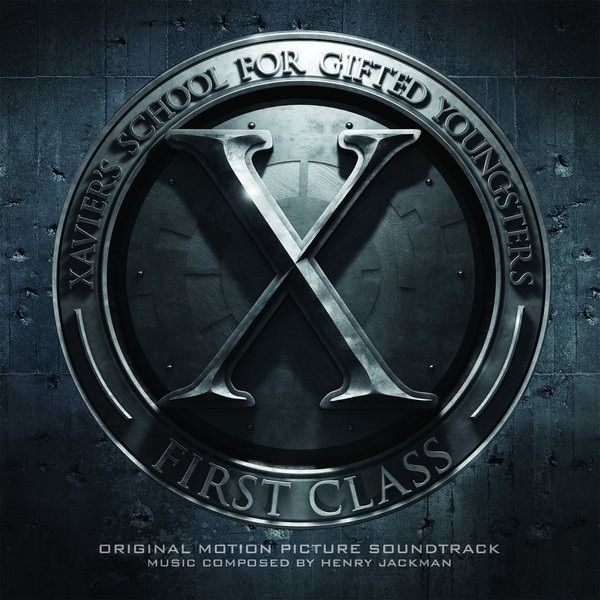 Show reviews in other languages
X-Men: First Class - 07/10 - Review of Edmund Meinerts, submitted at 2011-06-02 14:48:55
Is there any comic book film franchise that has patchier continuity? Well, besides Batman, that is? Anyways, one of summer 2011s tentpole pictures is X-Men: First Class, yet another soldier in the Marvel conquest of Hollywood alongside Thor and Captain America: The First Avenger. This is the fifth entry into the eleven-year-old franchise and the second origins film following 2009s X-Men Origins: Wolverine (confused yet?). It is set in the 60s against a Cold War backdrop and features teenage versions of the characters enrolling in their first class with Professor Xavier. Along for the ride is the series fifth composer, Henry Jackman  indirectly replacing the series other, rather better known H. Jackman.

A quick recap of the series musical history: the late great Michael Kamen gave the first film a somewhat troubled blend of orchestra and electronica whose album was rather short on themes and did not necessarily represent the scores highlights. John Ottman followed on the second film with a more traditional, orchestral superhero effort that some enjoyed, but others felt to be limp and unoriginal. Rising star John Powell then pulled out all the stops for X-Men 3: The Last Stand, writing a phenomenally complex, thematically developed action score that stands as the highlight of the series so far (and is something of an oddity in Powells career as it is one of the very few films hes scored that isnt either a thriller or an animation). His former colleague Harry Gregson-Williams then contributed a score for X-Men Origins: Wolverine that failed to live up to the potential of its strong opening cue and disappointed many. So its no surprise to report that Jackman, too, eschews references to the other scores and heads off in his own direction.

Although to say that is, perhaps, slightly misleading, as X-Men: First Class might come across as a disappointingly pedestrian effort to some. Jackman had shown glimpses of a dynamic orchestral sound hinted at in Monsters vs. Aliens and his contributions to Kick-Ass before going on to so surprise film music fans in 2010s sleeper hit (score-wise), Gullivers Travels. There are even rumors that he had a large hand in writing the popular, jaunty Up is Down cue from Pirates of the Caribbean: At Worlds End. This time around, though, he (or the producers) has chosen to deliver a more standard third-millenium action score that relies on tried-and-tested Remote Control Productions techniques combined with the defiant rock tones of Jackmans only other score in the superhero genre, Kick-Ass. Listeners who were disappointed with Brian Tyler, Patrick Doyle and Christopher Youngs respective spins on that style in Battle: Los Angeles, Thor and Priest will be even more let down here. However, those three scores were all strong in my opinion, partially because of that influence, and to label it as an automatic negative would be highly unfair.

The opening First Class cue presents Jackmans main theme in as convenient a package as you could ask for: the typical building anthemic statement over chopping string ostinati. The only really unique touch is the Kick-Ass -inspired rock instrumentation that joins the activity about halfway through, a sound Jackman remains loyal to throughout the score as an effective representation of the fledgling mutants youthful defiance. This cue exposes both a strength and a weakness of X-Men: First Class  on the one hand, the orchestration is stronger than in most RCP scores (despite existing in a rather dry mix), the string ostinati far more vibrant and layered here than in something such as Ramin Djawadis Clash of the Titans. One can usually tell what's orchestral and what's synthetic here, and there's none of that awful synthetic brass that plagues some of the lesser MV/RC scores. The theme itself, however, is far from being memorable. It is certainly enjoyable and harmoniously pleasing, but it doesnt stick easily in the mind. One could argue that the X-Men at this early stage have not earned a fully memorable theme yet, but Jackmans heroic intent is clear, so it is doubtful that this is the case. Its certainly not a bad theme, but it cant stand up to Powells Bathroom Titles or even Gregson-Williams Logan Through Time, which is why its reduction to a piano solo in Would You Date Me? lacks the impact it could have had.

A second, more ominous motif for Magneto begins to establish itself in the scores first third, though it is little more than two oscillating chords (the same two, incidentally, that repeat at the beginning of the refrain of Gollums Song from The Lord of the Rings: The Two Towers - a really farfetched idea could be that this is hint at the fact that Magneto would go on to be played by LotR star Ian McKellan, but that's a huge stretch). This gets its own crescendo of rock-laced defiance in Frankensteins Monster. Of some interest in places is the electric guitars very slight infusion of James Bond-like spy attitude into this motif, perhaps a slight nod to the films era. This occurs at 1:14 of Not That Sort of Bank. It would have been nice to hear more of this unique style.

The scores more-or-less orchestral action finally arrives in the pair of Rise Up to Rule and Cold War, and is fairly standard material, with the usual reliance on the ever-present ostinati and synthetic pulses to keep things moving along. A lone, all-too-brief zither hidden in the middle of Cold War is the only Russian touch in these otherwise entirely generic  though admittedly enjoyable  cues. The defiant synthetic side then counters in X-Training, a somewhat obnoxious montage-like cue which reprises some of the main anthem once the strings enter in the second half.

A highlight of the score is Rage and Serenity, which builds a subtheme from a troubled strings-and-piano version of the main theme with a hint of John Barry to a massively dramatic statement along the lines of Hans Zimmers Journey to the Line from The Thin Red Line. These dramatic string layers continue in the first minute of To Beast or Not to Beast and the second half of Coup détat, but again, this avenue isnt pursued satisfyingly enough to leave much of an impact.

After True Colors does little but unexpectedly pull a rhythmic motif from Clash of the Titans, Jackman unleashes his action finale in the next four cues. He manages to stir up a great deal of excitement and noise, but has an unfortunate tendency to introduce a good action idea and then quickly abandon it. For example, the first 26 seconds of Let Battle Commence are as close as this score ever gets to the swinging rhythms of Gullivers Travels, but the rhythm it segues into is as stock as it gets. The main theme is given its best statement in the first half of Sub Lift  complete with echoing choral backing, a true slo-mo moment  but is followed by some of the scores more annoying synthetic effects. Even more problematic is the reappearance of Zimmers Journey to the Line on the temp track, repackaged with some of the progressions from Jackmans theme and relabeled Mutant and Proud. The connection is unmistakeable and the attempt to tie it in to the rest of the score feels highly forced, an unfortunate misstep.

Appropriately, the score ends on an ominous, rather than heroic, note (obviously the film can't resolve entirely, otherwise there would be no series for it to be a prequel to). The final Magneto cue  perhaps the most abrasively rock-heavy of them all  provides the most consistent performance of the character's dual-chord motif. Unfortunately, the motif really isnt strong enough to be a villain theme, and the repetitively alternating pounding will become somewhat obnoxious in the end, leaving the listener with a feeling of overall dissatisfaction.

The biggest issue that X-Men: First Class has is that it tries to do too many things at once, but it doesnt do any of them more than adequately. It tries to be a Media Ventures power anthem score, but its power anthem isnt quite memorable enough to be fully satisfying. It throws in tantalizing hints of John Barrys James Bond style, and the score would have been really unique if it had followed up on that, but it doesnt. Probably Jackmans most successful idea is the addition of rock to represent the not-yet-maturity of the mutants, but even that is a touch anachronistic given the film's period and can become obnoxious in cues like X-Training. The occasional temp-track issue (especially with 'Journey to the Line') doesnt help either. It's a smoother listen than the multi-composer, genre-bending Kick-Ass, but doesn't have that score's uniqueness or highlights either.

All in all, X-Men: First Class is not a bad score by any means. Its a huge step above your typical phoned-in Remote Control score and is further proof that Henry Jackman is among the more talented half of that squad. But one gets the impression that the composer didnt really know in which direction he wanted to take this score, and ended up having to water all of them down as a compromise (and perhaps the producers are more to blame for this). Its a solid buy for fans of blockbuster action scores, but doesnt stand up to the stiff competition in the summer of 2011, and in the end will probably go down as an ever-so-slightly missed opportunity.
Trailer: