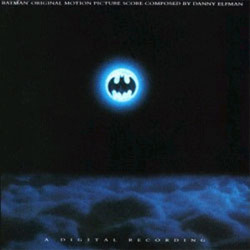 Show reviews in other languages
Batman - 10/10 - Review of Tom Daish, submitted at 2010-09-10 23:35:03
I never understood how the original Batman television series was made in the way it was. The camp and tacky production, while amusing enough, seems totally inappropriate for the character of Bruce Wayne/Batman. Despite a cult following for the original, it was Tim Burton's updating of the franchise for the 1989 hit that turned it into something a (merchandising) phenomenon. The imposing production design, a more disturbed Bruce Wayne played by Michael Keaton seemed much more suitable for the character and a suitably psychotic Jack Nicholson as the Joker and you have what is really quite a screwed up basis for a fantasy action film. For all its slightly thin plotting, it still stands as one of the best comic book adaptations ever brought to the screen, at least in terms of imagining the entire world of the comic in real life to perfection, although I readily admit I've never read the comic, it is more how I imagine Gotham City would look than the cheap sets of the television series.
Danny Elfman had previously worked with Tim Burton on the Pee Wee films, but Batman was really his first really big score and a great way to break into the genre. At the time, Elfman would have been seen as the outside choice and very unlikely to do anything special, but in a year filled with great scores (Williams' Indiana Jones and the Last Crusade and Goldsmith's Star Trek V amongst plenty of others, plus the debut of a certain Patrick Doyle with Henry V), Batman still stands as one of his best scores and the best of the summer. It also paved the way for him seemingly scoring every other big screen comic book adventure, but not nearly with the same level of success. Yes, the Batman theme is very close to Bernard Herrmann - Sunrise from Journey to the Centre of the Earth to be precise - but that kind of similarity with older scores is hardly unknown and there are still Elfman trademarks in abundance, the triplet strings, the bouncing percussion and brass writing all present and correct.

Aside from the main theme and fanfare, there is the sumptuous waltz, which unsurprisingly is given its fullest presentation in Waltz to the Death during the cathedral top finale. The more romantic moments occasionally use the music by Prince or Stephen Foster (presumably a directorial choice, but a good one) - the use of Beautiful Dreamer being particularly appropriate and quite wonderful. However, it's the action sequences that are quite special. Most of the first half action is somewhat smaller scale with some inventive and often slightly comedic percussion ideas, but during Batman to the Rescue and the later Charge of the Bat mobile and Attack of the Batwing, Elfman seems perfectly at ease with mixing hints and fragments of his main theme into an exciting fabric of brass, pounding percussion and athletic string passages. As John Barry often described the Bond music, this is essentially million dollar Mickey Mouse music, but that doesn't detract from it being totally engrossing and lavishly written.

I doubt that the Elfman of 10 years later would have written the same kind of score, but this is the Elfman that many younger fans really went for in a big way and it's not hard to see why. A composer who has his own voice, yet still writes within a traditional symphonic boundary, but when many of the older composers such as John Williams, were largely turning to more serious films and styles of writing. Elfman still has some difficulty being accepted by his peers, but of all the composers to emerge at the start of the 90's, Elfman is one of the leaders and scores like this cement that reputation. Not exactly high brow or subtle scoring, but I honestly doubt anyone could have written anything better or so perfectly in tune with Tim Burton's vision, an essential Elfman score and given a superb performance by the Sinfonia of London.
Batman - 10/10 - Review of Andreas Lindahl, submitted at 2008-01-20 21:25:40
Many people rank this as Elfman's best score ever, and sure, Batman, is a superb score, but I still think that Edward Scissorhands is the best Elfman has accomplished.

The soundtrack opens with Elfman's Batman theme, which is a short - almost so short it should be called a motif - fanfare piece, that is just perfect for our hero. This theme is then used as Batman's motif, and cropps up in several places in the score. Elfman once said that he made this theme so short, so that it could be quoted, and noticed, just over a couple of bars. Jack Nicholson's character the Joker has been blessed with a theme of his own. This is a wonderful waltz, heard at its best in "Waltz to the Death", that really illustrates the crazy mind of the Joker.

Elfman's score for Batman is dark, with a very Gothic mood. This, along with the brass dominated orchestrations, makes the score very dramatic, and effective, and fits the dark world of Gotham City like a glove.

Highlights are "Batman to the Rescue", with it's rousing action music, and powerful rendition of the main theme; the already mentioned "Waltz to the Death" and finally the "Finale", with it's glorious fanfare like ending.