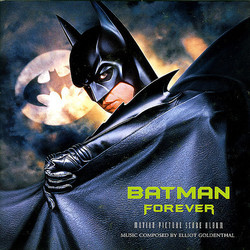 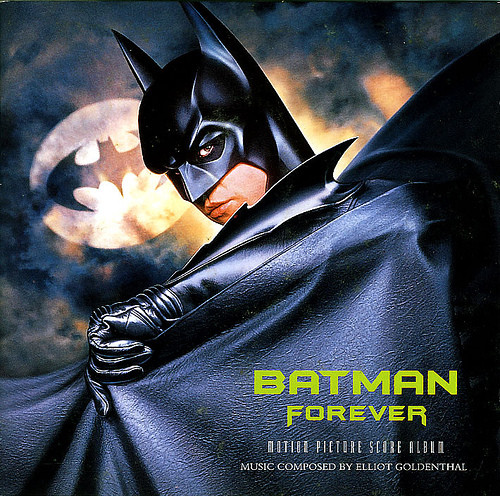 Show reviews in other languages
Batman Forever - 06/10 - Review of Tom Daish, submitted at 2010-09-11 09:37:06
After Tim Burton passed on directing the third Batman film, it was turned over to Joel Schumacher who re-reinvented the franchise as a more gaudy and even more comic book in style. Gone was the brooding darkness of Burton and in was excess, a new Batman in the shape of Val Kilmer and Chris O'Donnell as an outrageously bland Robin. The quasi tragic villains are replaced with something more akin to the original Adam West starring television show, Jim Carrey and Tommy Lee Jones mincing and mugging their way through the entire thing. Batman Forever still made heaps of money, although the fourth and so far, final installment was so awful that it effectively killed the series - for now at least.

Evidently, Danny Elfman decided to leave with Tim Burton and so scoring was passed to Elliot Goldenthal who, at the time, was seen as even more of a film music novice than Elfman. In truth, both composers are possessed of a very distinctive style and while Elfman may be the more popular, Goldenthal is still probably the more accomplished musician and composer. Having said that, where Elfman provided quite coherent scores for the first two films, Goldenthal's is a lot more eclectic and suffers from bouts of schizophrenia. Goldenthal isn't exactly renowned for have one note scores, but Batman Forever is even more indecisive than usual.

The Batman theme is essentially an unresolving fanfare and certainly isn't as memorable as Elfman's, even if it is technically more original. Trying to describe every idea in the score would take pages and pages, every track seems to feature something new. Whether it's the insanely fast strings of Gotham City Boogie or the outrageous Nygma Variations which goes from jazzy orchestral funk to cod cheesy sci-fi theremin. The action features lots of the Batman fanfare and blaring brass, often combined with wild synths that are impressively woven throughout the orchestral texture. The quiet moments are pleasant, but as so often happens in scores like this, get lost next to the blaring and unsubtle rest.

Batman Forever is brimming with invention, but while it's a thrill ride the first time, then second time becomes more of an exercise in trying to tie it together. Subsequent listens will either become weary or a source for more discovery, depending on your mood. However, the desire for Goldenthal to stick to something for just a little longer and the great shifts in tone are shortcomings, for me at least. It's difficult to say whether a more conventional score would have been better - it would unlikely have matched Goldenthal for invention, even if it had been a smoother listen. The recording quality and performance are particularly note worthy on what is a difficult and intensely orchestrated score. I suspect that personal taste more than ever would dictate any appreciation of Goldenthal's eccentric style. He's certainly done better scores, but it's still a mine field of invention and such still worth hearing.

Other releases of Batman Forever (1995):