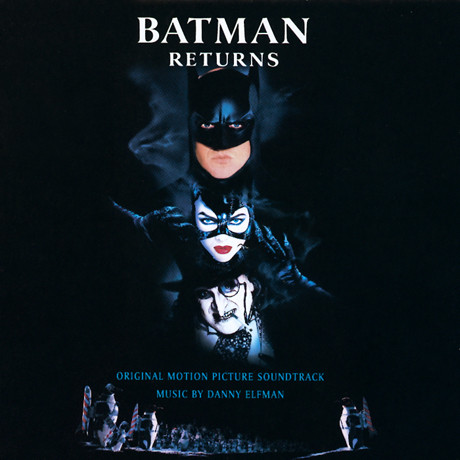 Show reviews in other languages
Batman Returns - 06/10 - Review of Tom Daish, submitted at 2010-09-10 23:35:44
Yet another Danny Elfman score that perfectly fits the film, but in this case, its dull and dreary. Opinion is very divided on this one. Some say that it is better than the original and much more subtle, however, I'm yet to be convinced and for my money it comes across as a bland extension of the original. Whereas Jack Nicholson's Joker was malicious and evil, but as his name implies, he was at least fun. The villains this time around are both sad individuals so the playful element to counterpoint to seriousness of Bruce Wayne is largely absent. Catwoman is represented by eerie high pitched violins which gives it an eerie sexiness, although the effect does wear a little thin before long. The Penguin receives a sultry and sad saxophone tune, which is more memorable than that for Catwoman, but is still dark and depressing. Unlike the original, the Batman theme doesn't appear very often, which does prevent it from becoming overtly repetitious, although using it as a thrill button just a little more often wouldn't have gone amiss.
While the first score had a few minor action cues at the beginning inter mixed with quieter moments, the first half is often just a dreary concoction of the Penguin and Catwoman themes as the characters are introduced to the film. The first major action cue is Batman vs. The Circus which is as exciting as anything else Elfman has written and even mixes in fairground pipe organs into a mix of Batman theme together with swirling violins and blazing brass. It does pick up noticeably in the second half as the cues seem to have more focus, rather than just being seemingly endless underscore of sad people doing sad things. Rooftops and Wild Ride are both typical Elfman action cues and even add in a very welcome touch of the macabre humour that made the original such good fun. The Final Confrontation is somewhat less exciting than the original Waltz to the Death, but it does very successfully blend the new themes with hints of the Batman theme and some exciting action music.

I suspect had the original standard not been so high, this wouldn't have seemed such a let down. I suppose if Elfman had gone down the road of simply retreading old material there would have been uproar, but as it was he has gone for a more subtle and understated approach, unfortunately, for a Batman film isn't nearly so effective. The album is also very long and a little pruning during the first half might not have been a bad idea. Worth picking up for Elfman fans of course, but those hoping for something as refreshing and exciting as the original may be disappointed.
Batman Returns - 08/10 - Review of Andreas Lindahl, submitted at 2008-01-20 21:25:40
In some ways better than Danny Elfman's score for the first Batman film (and vice versa), Batman Returns is one of the composers very finest, and most entertaining, scores. While the score for the first film was more action oriented, this score is slower and more emotional (It has its fair share of action, too, of course), although they both share the same dark and dramatic mood and sound.

Batman Returns is also much more thematically interesting. Apart from the excellent Batman theme, Elfman adds two new themes for the Penguin and the Cat Woman - given its best rendition in "Selina Transforms". Cat Woman is also associated with high violins imitating a cat - excellent idea and great effect.

The entire score is more lyrical and melodic, than its precursor and to make the music even more gothic and dramatic, Elfman makes use of worldess choir, a la Edward Scissorhands (In fact, the music sometimes evokes the same feeling of fairy tale and winter as Edward Scissorhands), as well as organ, giving the music a sometimes incredibly powerful and dramatic sound. The score is also a real beauty in the film, from the opening scene - with one of the best main titles Elfman has ever written - with the birth of the penguin, to the very end, with the cat woman, alone high above the ground. But at the same time, the music can get a little too quiet, and dull at times, but with the album release being almost 70 minutes long, these parts can luckily be skipped, without missing too much of the music.

The packaging is an excellent example of brainless producing. For some reason the tracklist is only placed on the actual disc. Really smart...