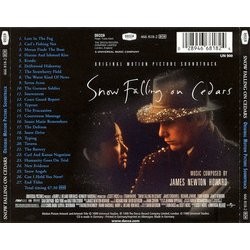 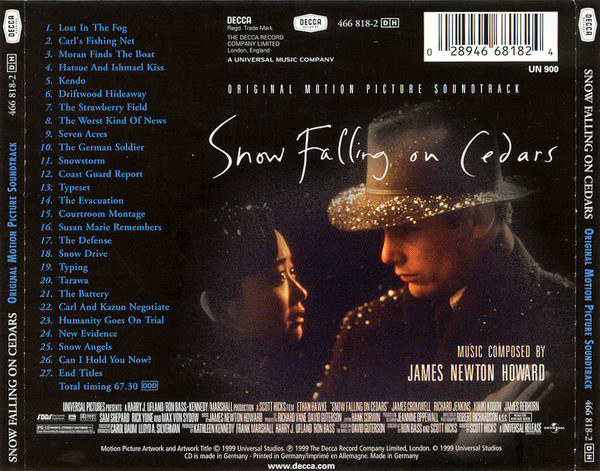 Snow Falling on Cedars - 08/10 - Review of Andreas Lindahl, submitted at 2008-01-20 21:25:40
James Newton Howard really did have quite a good, productive, year in 1999. His score for The Sixth Sense was one of the years' best, and he wrote scores for Mumford, Runaway Bride and a couple of other features, including the drama Snow Falling on Cedars, directed by Scott Hicks and starring Ethan Hawke, James Cromwell and Max von Sydow in a small, but impressive role.

Like the composers' score for The Sixth Sense, the music for Snow Falling on Cedars is very atmospheric and textural. There are no big themes or orchestral grandeur that will try to blow your socks off. Not that I miss all that, though, because Howard achieves what he is trying to do, by using subtle underscore. This may sound boring, but, again similiar to The Sixth Sense, it is not. Howard makes use of mostly strings. There's not much brass to talk about. When it is used it is often only for supportive reasons. Instead, Howard relies on solo performances by violin, cello and other instruments. This, coupled with the ethnic influences - there are some use of shakuhachi and other exotic flutes, as well as percussion - makes this score a beautiful and emotional listen, though its dark nature can get a little depressing at times.

Although the music mostly is low key and subtle, raw power is not totally absent. The track "Tarawa" is without doubt the highlight of the entire album. It's an amazing cue, for choir and orchestra. Extremely beautiful and highly emotional. Uplifting, yet sad - simply one of the most powerful cues heard in a score in 1999. Also the cue "The Evacuation" has some of this choral magic, as does a couple of other cues, like "Snow Drive", altough more quiet in the background.

James Newton Howard has really matured as a composer. Snow Falling on Cedars, along with The Sixth Sense, are two perfect examples of a side of the composer we haven't seen, or heard, much from. I think it's wonderful and interesting that some composers actually excel at what they do. Makes listening to film music much more fun and entertaining.
The music of this soundtrack was used in: