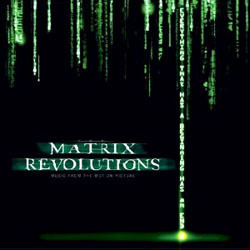 Show reviews in other languages
The Matrix Revolutions - 09/10 - Review of Tom Daish, submitted at 2010-09-11 08:43:05
In my review of the score to The Matrix Reloaded, I chastised the composers (Davis and digital chums) for not really expanding on Davis' original concept for the first Matrix score. However, Matrix Revolutions makes Reloaded seem like a red herring; a trip down a blind alley that didn't go anywhere and Revolutions becomes the score we were all expecting and hoping for. Unlike Reloaded, Revolutions adds to Davis' soundscape in interesting ways, rather than merely slapping on the digital percussion every time there's a fight. Juno Reactor are back in the fray, but this a much more sensibly sequenced album that mixes the collaborative material with portions by Davis alone. The result is an album that is much more consistently entertaining (although there are still plenty of passages which will give many a headache), but Davis has more time to work on his own new material, rather than either collaborating or reworking music from his original score, as happened for Reloaded.
Davis' basic material needs little introduction, there's the overlapping low brass chords that have become the series' musical trademark and Philip Glass on amphetamines cycling string and brass figures. This is now coupled with the occasional dollop of Juno Reactor (whose backing beats all sound the same after a while, have these people no imagination?) which overwhelms the orchestra to some extent, but pleasingly, Davis' music breaks free from its electronic wall of sound and those moments are potent indeed. It is with some irony that while the films purport to show the struggle of humanity against machines, human emotion is rarely strong point and the same goes for the music. However, Davis introduces one rather lovely cue in Trinity Definitely, the only real oasis of understated drama and peace in the entire score, but it's a crucial breathing space. Portions of Why, Mr Anderson? are equally captivating, although in that instance, Davis builds on the basic material with surging brass and choir.

It is, of course, the action that the films and scores are most famous for, and on that count, Davis doesn't disappoint. There are many highlights, perhaps Neodammerung (touch of the Goldenthal track titles there) being the finest, a huge choral action cue where everything is thrown together, but in a way that still makes sense and has some narrative structure. The longest cue, Navras, closes the album and it comes across as some kind of insane, vaguely exotic, night club action cue, but with epic, apocalyptic chorus. The minor scoring trend of featuring wailing, eastern vocals is in evidence, although there is so much brass, percussion and choir that it's more of an icing on the cake than a crucial element. Still, it's an impressively sustained 9 minutes and a bracing finale, even if it doesn't actually feel very final.

Unlike the first two films, there are no songs and no song album for this film, thus Davis is afforded over around an hour (from a 110 minute score) on album. Only one cue doesn't feature Davis at all, but In My Head by Pale 3 (whoever they are) is a fairly obnoxious, grungy dance/techno/whatever track, even if it doesn't sound as out of place as it might. If I'm brutally honest, there probably isn't anything that matches the rush of inspiration Davis had when penning the original score, but very few sequel scores eclipse the original. However, Revolutions builds on the first two scores and combines the best elements of both, so from that point of view, it has the greatest variety so the series goes out on a musical bang. All in all, I'm not sure I'd have wanted Davis to collaborate - he has the ability to do his own electronics as well as anyone else (Danny Elfman, for example), but with more power given to Davis' orchestral score here, the results are exciting, bracing and represent the best in contemporary action scoring. Thrilling stuff.
The Matrix Revolutions - 08/10 - Review of Andreas Lindahl, submitted at 2008-01-20 21:25:40
It's time to end the Matrix saga, with the final, third episode in the trilogy, The Matrix Revolutions. It's without doubt one of the most awaited films and scores of 2003. Don Davis's music for the two first movies has been quite groundbreaking, inventive and unconventional. And extremely good.

After hearing The Matrix Reloaded I expected the score for Revolutions to be even more electronic, with more collaborations between Davis and groups such as Juno Reactor. That's not the case, however. The Matrix Revolutions is more of a return to the sound of the score written for the first movie, back in 1999. Similar to The Matrix Reloaded, however, is the further exploration and development of musical ideas presented and established in the previous films. The strong percussive elements and the echoing, and very effective, brass textures are present throughout the score, of course. After all, that is what represents the actual Matrix, and it's therefore very fitting that this musical signature, which has dominated all the three scores, actually disappears in the end, leaving more room for more melodic, less atonal music, such as the glorious, optimistic and uplifting music in "Spirit of the Universe". However, the cue ends in a rather suspenseful and unexpected way, which is interesting. A twist perhaps? We'll see... The theme for Neo and Trinity is given more room and appears in a lovely, understated rendition in "Trinity Definitely", performed by English horn and soft strings. Over all, I think there's a better balance between action sequences and softer cues in Revolutions, compared to the two previous scores. It gives the listener a chance to catch his or her breath and prepare for the next action cue.

Davis's collaboration with Juno Reactor can be heard in three cues on the album; "The Trainman Cometh", "Tetsujin" and "Navras". They are rather similar to the duos co-composed cues for the previous film and really don't add anything new, although the latter includes some unusual Indian influenced vocals, that seems somewhat out of place compared to the sound of the rest of the score.

The absolute highlight of the score comes towards the end of the soundtrack CD. "Neodämmerung" is an amazing six minutes long choral piece, with full choir, strong brass and percussion, featuring all the elements that define the scores for the Matrix universe. It's some of the best music ever written for the Matrix films and one of the best cues of 2003. Davis follows this musical path, with extensive use of voices, throughout "Why, Mr. Anderson?" and "Spirit of the Universe" with a grand choral finale in the nine minutes long "Navras".

Davis composed around 110 minutes of music for the final film, so a little more than half the score is included on the soundtrack release. Why the record label and studio have decided to release a soundtrack without a dozen or more "inspired by" songs I cannot understand. Although it is, of course, something I welcome with open arms. The Revolutions soundtrack is a much more coherrent and fullfilling listening experience than the double disc soundtrack released for Reloaded and more complete than Varčse release of the first score.