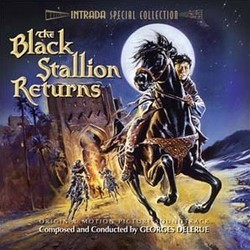 Show reviews in other languages
World premiere release of complete original soundtrack from Robert Dalva follow-up to THE BLACK STALLION, starring Kelly Reno, Vincent Spano. Georges Delerue anchors outdoor action-adventure set in the Sahara with one of his richest themes of a legendary career filled with treasures. In balance are several exciting action cues for battle sequences plus climactic racing set-piece. Original 1983 soundtrack album presented 30 minutes of score, heavily edited, re-sequenced to make brief but effective album. However, much action music was left off, including striking variant of powerful major-key idea (heard just once before in 'Clipper Take-off'), now played on brass in rousing fanfare style during final race. Other highlights include deeper examination of desert music plus final climax of score, deleted from original album and film. Complete score presented in stereo from original multi-track session masters vaulted at MGM. Since the 1983 LP incorporates many edits, changes to sequence, as a bonus we have included that admittedly-classic album as well, completely re-mastered from two-track stereo album masters. Georges Delerue conducts. Intrada Special Collection release limited to 1500 copies!

Other releases of The Black Stallion Returns (1983):