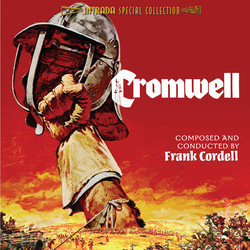 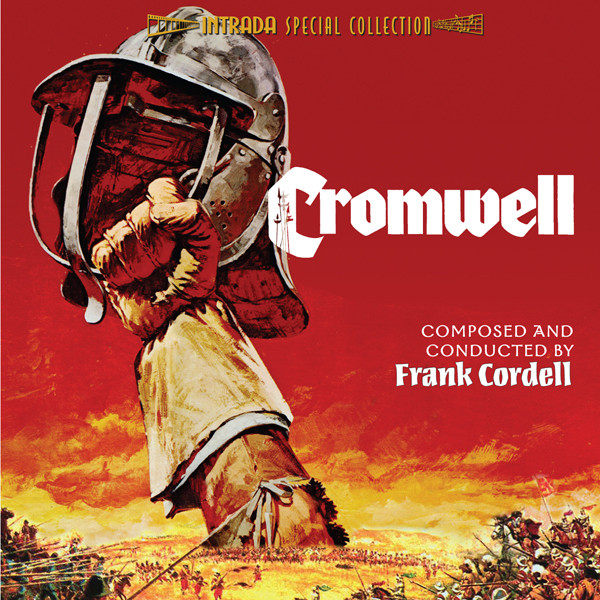 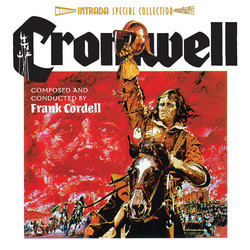 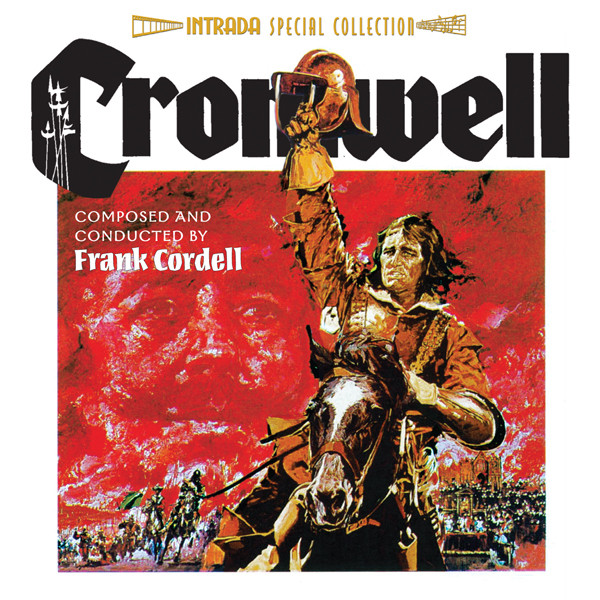 The first I knew of composer Frank Cordell being involved with CROMWELL was when I read an article in the Films and Filming magazine in 1969 telling us that the composer was having more than a few problems completing the score, there were even rumours at one point that I vaguely recall saying that he had been replaced. Thankfully this was not the case and Cordell produced a stirring and imposing musical score that he tailored to the movie enhancing and supporting it perfectly, his sterling efforts on the soundtrack earning Cordell both an Oscar and Golden Globe nomination for best original score in 1971. The composer being nominated alongside Jerry Goldsmith for PATTON, Henry Mancini for SUNFLOWER and Alfred Newman for AIRPORT, all of them loosing out to music-smith Francis Lai for his haunting score to LOVE STORY. Cordell’s music was at the time of the films release slated by critics, many of them saying it was un-suitable for the movie and one even remarking that the music was the weakest attribute of the production, I could not understand why they were so anti the music, I thought Cordell’s music was totally suitable and in keeping with the period in which the film was set and also underlined the action and enhanced the drama perfectly but at the age of just fifteen, what did I know, all I do know is the music has stayed with me all these years. Born in 1918, Cordell was to become an important figure within British light music and also music for radio, television and British movie productions. The composer began to work steadily on film scores from the early 1950,s and also wrote music for advertisements. He was also a renowned and respected conductor and arranger becoming musical director for HMV/EMI in 1955. It is probably true to say that the composer reached his busiest in film music composition during the 1960,s when he scored THE REBEL and THE BARGEE which were both successful and are now regarded as British comedy classics, starring Tony Hancock and Harry H Corbett respectively.

He also provided rousing and exciting soundtracks for movies such as second world war drama MOSQUITO SQUADRON and the period drama/adventure KHARTOUM, plus created an emotive and poignant musical backdrop for RING OF BRIGHT WATER, with the song from the soundtrack entering the British popular music charts in 1969 for Irish born singer Val Doonican. As the decade of the 1970,s began Cordell remained busy and in 1970 scored HELL BOATS and CROMWELL. The soundtrack for CROMWELL was originally released on a Capitol long playing record, Cordell’s score was more or less suppressed under sound effects and dialogue but in my opinion its quality still managed to filter through these and make it’s presence felt, for many years collectors were asking record companies to release the score but to no avail as the tapes had apparently been lost. There was one piece of music from the score that was re-corded and released on a Chandos compilation CD, this was a quadrille based upon the theme Cordell penned for King Charles, plus there was also a performance of themes from the movie broadcast on BBC radio in the 1970,s which I think was conducted by Cordell. Intrada delved deep into the archives and unearthed the tapes which they had originally thought were the tapes of the original LP record but there had been a mix up in the labelling of the masters and when Intrada went through the recordings they found the music tracks. So the score had been there all the time and had laid in the archive at EMI for over forty years. This special two disc set not only includes the previously unreleased score but also includes the original Capitol recording with the dialogue and effects on the second disc.

The score disc begins with THE MAIN TITLE. The composer utilizes a powerful and daunting brass fanfare to introduce an imposing choral theme that immediately creates a sense of power “REJOICE IN THE LORD, REJOICE IN THE LORD,HE HATH PUT DOWN THE MIGHTY FROM THEIR SEAT, HE HATH EXHAULTED THE HUMBLE”, which immediately creates an atmosphere that is both commanding and humbling. This opening becomes what I call Cromwell’s theme and also the core theme for the soundtrack, the composer adapting and arranging the theme in various ways, at times it being fearful and dominant and on other occasions it is emotive and heart-rending, it underlines action scenes, accompanies moments of sadness and also emphasises the deep religious beliefs and patriotic feelings of the films central character.

The choir is interspersed and supported by further brass flourishes, percussion and timpani which are themselves supported by
strings that add a sense of urgency or desperation but also infuse an atmosphere that is calming in places. This is an impressive and commanding piece which sets the scene in the movie superbly. Track two, SUCH TALK IS TREASON, is a short but tense sounding composition, Cordell using brass to begin, but swiftly turning to the woodwind and string sections to heighten the dramatic atmosphere. The music is heard as two of Cromwell’s friends visit him to persuade him not to leave for America, Cromwell agrees to stay and returns to Parliament in the hope he can be instrumental in persuading the Monarch King Charles to change his ways. Track three, CONFRONTATION ON COMMON LAND is heard as the Kings soldiers under the command of Lord Manchester (Robert Morley) commandeer land which has been given to commoners, Cromwell intercedes but fails to stop the actions and also is helpless to stop the arrest of one of his workers for treason after calling the King a thief. The piece begins with a sombre and threatening brass stab, which segues into tense strings that are punctuated by percussion, brass returns but is subdued in its performance of the central theme, the music relays here the sense of frustration and vulnerability felt by both Cromwell and the commoners in the face of the Kings unlawful actions. “ You should know Cromwell, that the King is the law of this land” remarks Manchester. “On the contrary my Lord Manchester, it is the duty of the King to up-hold the laws of the Land”. retorts Cromwell. Cordell’s tense and pulsing music adds much to the scenes overall impact. Cordell’s music as I have already stated was not that well received by critics at the time of the films release, but has since seen a turn around in those opinions, the style employed has been likened to Walton and Copeland and also has been said to contain phrases and quirks of composition and orchestration that can be compared to Alex North. Cordell’s score I suppose can be divided up into two sections, there is the themes for Cromwell and also the thematic material for King Charles and the Royalist forces which are based upon music, hymns and psalms from the 17th Century and then the composer employs a more conventional way of scoring in some of the actions cues, ie; the battle scenes, where driving strings, racing snares, booming percussion and brass take up the gauntlet and rise to the occasion, but even within these cues Cordell still manages to incorporate themes for both Roundheads and Royalists as they engage in a deadly conflict that set Englishman against Englishman.


Track 13, is one of the many outstanding cues on this compact disc, THE NEW ARMY was always one of my favourite tracks on the original LP record, but the music was concealed partly under sound effects, the music underscores Cromwell training his new model army, and also heralds their arrival with the composer bringing to the fore, Cromwell’s theme vocalised by male voices and supported by martial sounding instrumentation in an arrangement that is stirring and inspiring. Another section of the score that is for me most engaging and wonderfully done by the composer comes at the end of the track, THE BATTLE OF NASEBY, which was a turning point in the English civil war in the favour of the Parliamentary forces.
It is the scene where Cromwell realises that they have been victorious in their fight against the King, but at the same time he receives news that his son has been killed in the battle, a lone soprano performs the opening phrases of the central theme, “REJOICE IN THE LORD, REJOICE IN THE LORD” eerily but also emotively and celestially as we see Cromwell’s pain for his son as he leads him away draped over his horse. Cordell’s music rises in an almost a triumphant manner as the scene closes but at the same time the music underlines the sense of loss experienced by Cromwell as the images fade and the movie goes to intermission. This release is in my opinion an important one and gives us at last the chance to savour and appreciate a score that was heavily criticised, again in my opinion wrongly and as the liner notes say it also gives us the opportunity to make up our own mind about its qualities and its pitfalls if there are any, for me CROMWELL is a masterpiece, always has been and always will remain so. This compact disc set is magnificently packaged and presented, with highly informative notes and having the original LP recording now also evokes memories of younger days when film music contained real substance, real themes and was exciting and innovative. Thank you Frank Cordell and thank you Intrada….this is an essential purchase.. JOHN MANSELL.
Spectacular find! Frank Cordell's magnificent Oscar-nominated score for lavish Ken Hughes movie about Oliver Cromwell, King Charles I, bloody English Civil War of 1600's and starring Richard Harris, Alec Guinness, was buried beneath an all-dialog LP on Capitol label in 1970. For years our interest in bringing album out on CD was muted by this sad anomaly. Then, in wonderful stroke of fortune, complete stereo session tapes were found in EMI vaults, labeled with other film audio elements (foley work, sound effects, etc.) and seemingly lost forever. Release of powerful score was possible at last! Intrada world premiere 2-CD set features entire score in stereo, including rare 'Intermission' music dropped from prints of film! Highlights are many but of particular note are dynamic sequences for orchestra plus massive chorus throughout. Action cues are exciting. Climax that brings close to part one of film (Battle Of Naseby) is also magnificent. Towering above all is powerhouse coda to entire score, with fortissimo orchestra & chorus ringing triumphant major chords to bring masterful score to spectacular close. Disc 2 presents complete 1970 Capitol LP in stereo from original album masters, offering admittedly compelling dialog (with music excerpts underneath) spoken by two masters of their craft. Spectacular package features original album cover plus exciting alternate 'flipper' cover, handsomely designed by Joe Sikoryak. Informative notes by Frank De Wald complete nice set. Frank Cordell conducts. Intrada Special Collection release available while quantities and interest remains!