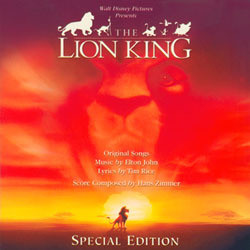 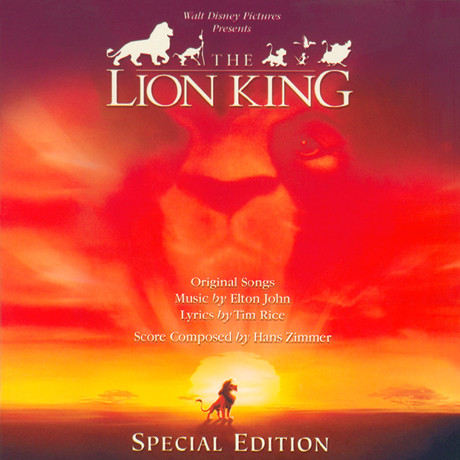 The Lion King - 08/10 - Review of Tom Daish, submitted at 2010-09-07 22:35:44
While reaching a creative peak with Beauty and the Beast, Disney's most financially successful outing remains Hamlet with animals, The Lion King. Instead of a set of Broadway style songs from Alan Menken, a different approach of partnering a song writing legend with a 'proper' film composer, so songs by Elton John and Hans Zimmer contributing the score. In retrospect, the mixture doesn't seem so surprising, but was fairly novel at the time. Elton John has been long famous in the UK and collaborating with Tim Rice turned in some pretty entertaining and occasionally memorable songs. The best is certainly Circle of Life with the now ubiquitous Lebo M African vocals to spice things up, with both Lebo M and Zimmer contributing quite a bit of arranging to convert the song from just a good tune into a spectacular opening number. Elton John's own version later in the album gives a good indication as to just how different the film version is.

The most famous entry is the romantic ballad Can You Feel the Life Tonight, which is given a quite charming performance for the film, even if the mildly comedic opening and closing are a little inappropriate. I Just Can't Wait to be King and Be Prepared prove that Rowan Atkinson and Jeremy Irons are not natural singers, but Irons' menacing voice as Scar would clearly be hard to replicate and the half spoken, half sung style works well enough. Although it still displeases many film music fans that Hans Zimmer has as many Oscars as Bernard Herrmann, Elmer Bernstein and Jerry Goldsmith and more than Alex North, his work on The Lion King is some of his finest. Zimmer has had occasion to write Africa styled music on several occasions - most notably for The Power of One - but the mixture here is very potent. There is an epic sweep to This Land, while To Die For is a thrilling action cue topped out with a mournful finale, all heightened by elegant choral writing.

King of Pride Rock starts out darkly, but brightens to resolve in a reprise of Circle of Life, perfectly bookending the score. Perhaps the biggest disappointment here is how brief Zimmer's contribution to the album is. Disney have a bad habit of providing very brief score selections when by someone other than Alan Menken and in The Lion King, this is as keenly felt as it is with Goldsmith's terrific Mulan. The album is naturally padded out by Elton John's own versions of his songs which convert them to a more traditional soft rock arrangements, but at no great detriment for all that. Despite the gem of Circle of Life, The Lion King is not furnished with the greatest songs in a Disney film, entertaining though they are, but it's Zimmer's African rhythms and choral writing that sticks in the memory the longest. Just unfortunate that one of his finest scores receives such a skimpy release.
The Lion King - 08/10 - Review of Andreas Lindahl, submitted at 2008-01-20 21:25:40
The highlight of this soundtrack is Hans Zimmer's emotional and powerful score. The songs, written by Elton John and Tim Rice, are far too childish and goofy ("Hakuna Matata") or sweet ("Can You Feel the Love Tonight") although the versions performed by Elton John himself are quite good. The only song I really like is the opening piece, "Circle of Life". Arranged by Zimmer, with help from Lebo M, it has some superb chanting African voices through the entire song, although they are more prominent in the beginning.

Zimmer's score - which won him an Academy Award, by the way - is in rather traditional Zimmer style, i.e. a lot of synths, percussion and powerful brass and strings. The beginning of "...To Die For", for instance, is a rousing piece of music, which makes use of a choir, to make the music more exciting. But what I like most in Zimmer's score are the more emotional parts. "This Land" is a wonderful track, with flute presenting a beautiful soaring theme, later joined by the whole orchestra and the choir. Absolutely gorgeous! The latter half of "...To Die For" is also very beautiful, with it's sad flute and strings, as well as soft choir. This music is a little reminiscent of Wolfgang Amadeus Mozart's choral piece "Ave Verum Corpus". The soft music - mostly flute and strings - continues in "Under the Stars". Zimmer also makes frequent use of African chantings and ethnic percussion, like in the second half of "Under the Stars". "King of Pride Rock" is a superb cue, which builds from soft music towards a glorious ending, with the entire orchestra, as well as the choir closing the score with an epic rendition of the "Circle of Life" theme.

It's really a big shame that there only are four score cues on the soundtrack. Zimmer's score really is wonderful, and is perhaps the best, or one of the best, written for an animated Disney film. Let's pray for a full release of this score. (Am I not allowed to dream...?)
Golden Globes: Best Original Score (Winner)
Oscars: Best Original Score (Winner)


Soundtracks from the collection: Kids