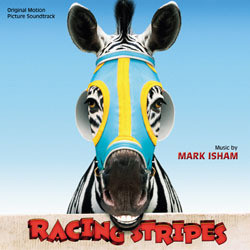 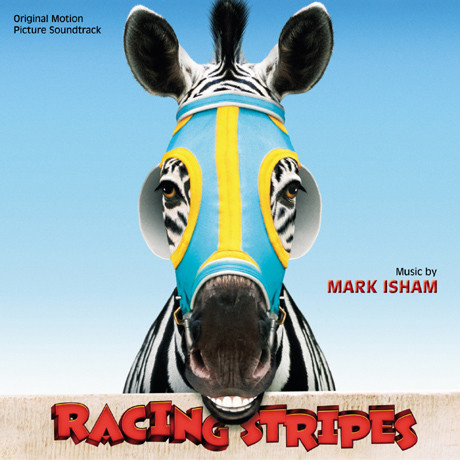 Show reviews in other languages
Racing Stripes - 08/10 - Review of Tom Daish, submitted at 2010-09-26 20:23:02
It seems that no matter how good the actual films are, film music fans are spoilt for choice when it comes to fine scores to family movies and Racing Stripes is yet another delightful example. The film - about a zebra who wants to become a race horse; Babe does Rudy - was a modest success, but after his much sought after unreleased score to Fly Away Home, it's pleasing to note that Mark Isham's score receives a splendid release from Varese. Films with a good credits song are rarer than hen's teeth and so it's warming to note that Taking the Inside Rail, performed by Sting, music by Isham, is not only good, but pretty well terrific. From its mysterious, low key opening of strings, strumming guitar and Sting's soothing voice, to the subtle African chanting that accompanies the verse and the genuinely haunting and slightly melancholy chorus it's a perfect opener. The melody occurs a couple of times in the body of the score and easily seeps into the aural consciousness.

The score itself is a mixture of styles that Isham blends together extremely effectively. The suggestion of Africa in Taking the Inside Rail is taken further in the score itself, right from a brief moment in It Was a Dark and Stormy Night and, of course, during Out of Africa. Given that Taking the Inside Rail is a slightly melancholy melody and this is a triumph over adversity story, a more heraldic melody becomes more dominant. For some reason, it rather put me in mind of Silvestri's Mummy Returns, only in a cursory way, but its not as indelible and lacks the extra depth of its melancholy stable mate (pun, sorry). However, it does give a little more sense of location, that being the open plains of the American mid west and Isham's typically lovely brand of Copland homage makes a welcome addition. This, in turn, is complimented by some bluegrass which manages to add further to the local colour and seems an appropriate accompaniment to the lighter, comedy driven moments in the film.

No horse based film can really end without The Big Race and dutifully, the film and composer duly oblige. A hint at the finale crops up in Spring Training, but the full blown glory lifts off in the titular cue. If nothing else, it's great that Isham has the chance to write a decent seven minute chunk for the sequence and that it is every bit as thrilling as one would hope is a bonus. Where Randy Newman didn't quite conjure up the excitement of the race in Seabiscuit, Isham pushes the thrill button from the get go and sustains the momentum from the initially less certain earlier sections to the expected euphoria as the stripy hero wins at the last minute by a gnat's crochet (at least that seems the likely outcome). In the Winner's Circle functions as a brief coda before Bryan Adams pipes up with It Ain't Over Yet which isn't as good as the opener, but is certainly no disgrace and makes for a fine way to close. This kind of score shows the composer at his finest (unlike his generally tedious thriller scores) and an easy recommendation. Lovely.