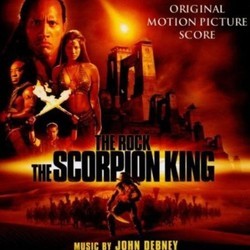 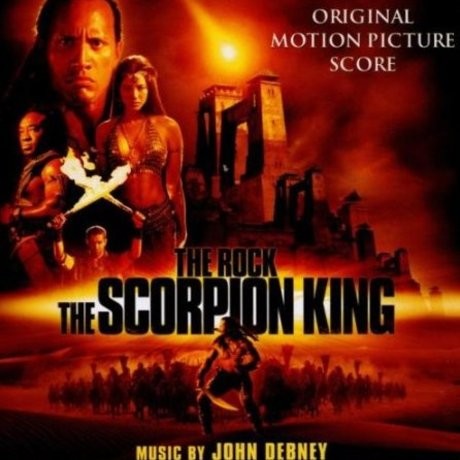 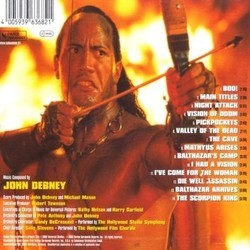 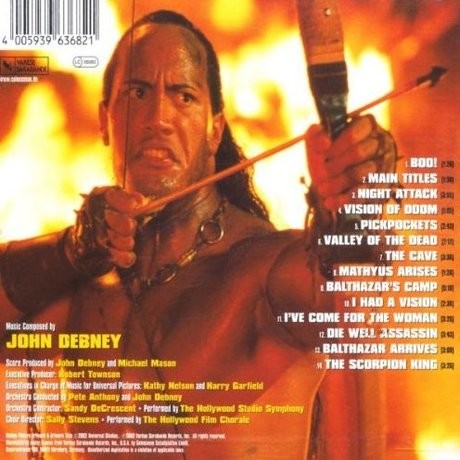 Show reviews in other languages
The Scorpion King - 04/10 - Review of Tom Daish, submitted at 2010-09-11 08:52:00
The Mummy was a superior example of a B Movie made with top notch production, just the right amount of knowing humour and a pleasing cast. The Mummy Returns was firmly the inevitable sequel, blowing everything up to more ludicrous, but considerably less interesting proportions and now we have the first prequel of the series, The Scorpion King. As Roger Ebert commented, 'I think The Rock has a promising acting career ahead of him and I still think it's ahead of him.' Of course, Ebert is wise enough to say that in the Arnie, rather than the Al Pacino sense of acting. So here he is in his first starring role, in something of a more dirty, action adventure than the slicker, FX filled originals.
I have no statistics to hand, but I would lay real money on bet that the average grosses for John Debney scored films are higher than that of the average grosses for Jerry Goldsmith scored films. I suspect The Mummy is one of the highest grossing Goldsmith scored efforts ever. Whatever the case, the law of diminishing returns for film music in sequels has us moving from one of the greatest composers to the supremely talented Alan Silvestri and now to John Debney. It would be unfair to suggest that Debney is anything less than an accomplished composer, at least technically, but here again displays a total inability to stand out from the crowd. The Mummy sounded like Goldsmith, The Mummy Returns sounded like Alan Silvestri, The Scorpion King could be by any number of composers.

What is perhaps most telling is that little bits suggest the previous two scores, the skittering piccolo for whenever something vaguely skin crawling appears, the grinding brass to suggest the sinister, but more imposing events and the liberal choir pumping up fairly ordinary orchestral cues into something with at least the feeling of an epic. Even then, it's just volume and bluster over anything more substantial. About the only modest invention is the rock guitar bits in the opening cue and in a few of the action sequences, but these aren't honestly to my taste and aren't interesting enough in themselves to perk the score up any great amount.

If orchestra, choir and rock band blazing through your speakers is your thing, then this is probably the score for you. However, with little in the way of interesting, let alone remotely memorable melodic material and not much in the way of distinct atmosphere, it's a bit difficult to recommend. Yes it is written by a skilled composer, Debney undoubtedly knows what buttons to press and when, but it's frankly all a little bit incidental sounding. Almost every cue sounds like it should be in the middle of a longer cue, joining the portions of memorable material, but this never happens and all that is left is to enjoy the exciting playing of the orchestra and spot the little bits that sound like Jerry Goldsmith and the little bits that sound like Alan Silvestri, which is certainly easier than spotting the bits that sound like John Debney.