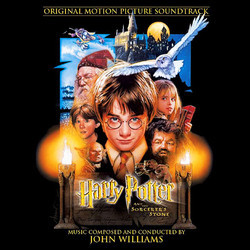 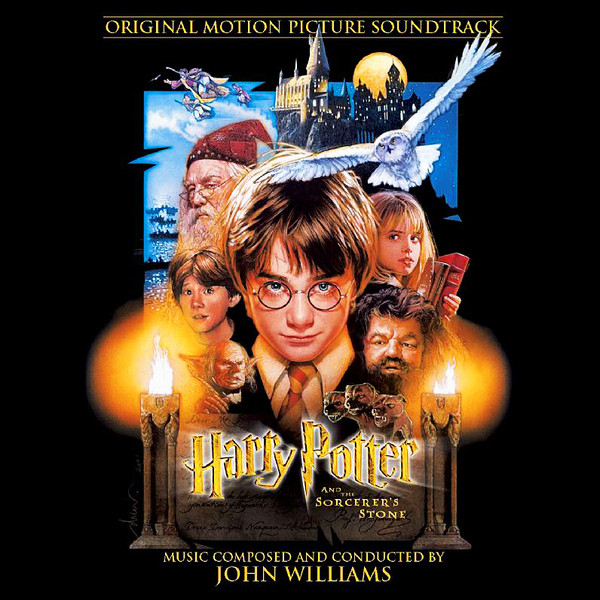 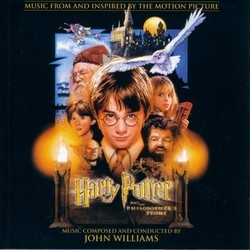 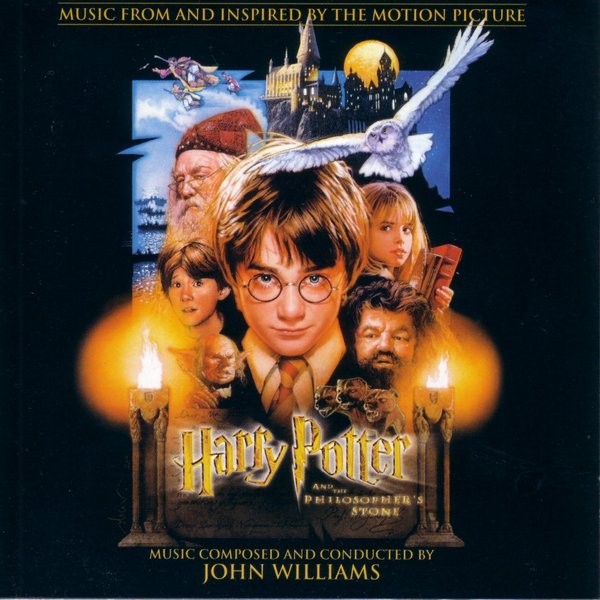 Show reviews in other languages
Harry Potter and the Sorcerer's Stone - 08/10 - Review of Andreas Lindahl, submitted at 2008-01-20 21:25:40
It's finally here! To say that I have been looking forward to this score is a huge understatement. As a fan of the Harry Potter books and the music of John Williams it has almost been painful to wait... So my expectations were high. Was it worth the wait? You bet! Although I don't love it, I really, really like it (as a friend, of course...) and I'm quite sure that Williams' score at least will get an Academy Award nomination. Who knows, John Williams might even walk home with a golden boy in his pocket.

After having heard "Hedwig's Theme" in the trailers for the film, many expected the score for Harry Potter and the Sorcerer's Stone (or the Philospher's Stone) to be in the same style as the composers' wonderful score for Hook, and this is certainly one of the largest reasons so many have been looking forward to this score. And sure, the score for Harry Potter is in many ways similar to John Williams' music for Steven Spielberg's embarrasing Peter Pan flick. Similarities can for example be found in the orchestrations - this is classic Williams, the kind of sound that most people normally associate with the composer. It's brassy, melodic, upbeat, adventureous and lively, complete with swirling strings and woodwinds. While listening to Harry Potter it is also easy to think about the composers' scores for Star Wars and Home Alone. The score shares the playful woodwinds with the former score, and the warm Christmas sound with the latter, something achieved with the use of celesta, bells and wordless female choir.

On to the thematic material, then. There is an abundance of themes in this score. Large and small they are all quite memorable, especially the theme for Hedwig, the beautiful music representing Harry himself and the extremely catchy and proud little march representing Hogwarts (that is my guess, anyway). I suppose that most of you are familiar with Hedwig's Theme, since it was used in the trailers and have been performed at several concerts prior to the films' release, with bootleg recordings of it floating around. It is used throughout the entire score and shows up in a large number of cues, sometimes performed by grand brass and other times by lush strings, or by subtle celesta. The extensive use of this theme makes me wonder if it is really only used to represent Harry's white owl. One part of the theme shows up in "Mr Longbottom Flies", for example, suggesting that this is the scores' "flying theme". It is certainly grand and glorious enough to be used as such.

The theme for Harry himself is presented for the first time in the second track of the CD, "Harry's Wonderous World", which without doubt is one of the very finest cues this score has to offer. Harry's theme is simply wonderful. Consisting of two sections it starts with a lush string based part, followed by a more fanfare sounding, optimistic little ditty, revolving around a four note phrase and with orchestrations dominated by brass. Classic Williams. Had the entire score been like this, this soundtrack would have gotten 5 shiny stars. Not that the rest of the score is bad, but at times the mysterious, sneeking around music dominates a little too much. I suppose I wanted the score to be a little more adventurous and grand...

"The Quidditch Match" is the scores' large action piece. Clocking in at over eight minutes this is a lively and bold piece, dominated by brass and percussion. More action can be found in "The Chess Game", which is a very militaristic cue, with tons of percussion, such as snare drum, timpani and xylophone, but "The Quidditch Match" holds the most memorable and entertaining action music on the album.

Exellent Christmas music can be found in "The Norwegian Ridgeback and A Change of Season", with the latter part of the cue offering some really lovely music, reminding me of Hook and Home Alone. "Christmas at Hogwarts" is an excellent piece. Opening with bells and woodwinds it is soon followed by a small number of voices (the ghosts of Hogwarts perhaps?) singing a Christmas song in sotto voce, supported by eerie synths, which in turn is replaced by some great holiday inspired music.

Although most of the score is far from original, some cues are actually quite unconventional, such as "Diagon Alley and The Gringotts Vault", which sounds like it is arranged for Renaissance - or at least really old - instruments, as well as fiddle and different flutes. "The Invisibility Cloak and The Library Scene" has some subtle, spooky synths representing Harry's invisibility cloak, while "Fluffy's Harp" is an amusing little duet for harp and bassoon.

All in all, Harry Potter and the Sorcerer's Stone isn't exactly what I expected it to be, but it's darn close and it is certainly one of the best scores of 2001. Fans of Hook, Home Alone and Star Wars will probably appreciate this score. I'm rather sure that I will love it after hearing it in the actual film.
Harry Potter and the Sorcerer's Stone - 08/10 - Review of Tom Daish, submitted at 2010-10-02 12:48:02
The arrival of Harry Potter novels is to books, what the arrival of the next Star Wars films is to cinema - a media circus. As expected, the hype about the Harry Potter film has been intense with predictions of it making more money than the GNP of Africa. Whether this holds true or not remains to be seen, but the indications aren't bad and having John Williams at the scoring stage is some decent indication of its stature. For Williams to score this kind of film these days and it not be made by Steven Spielberg or George Lucas is something of a surprise. His general assignments have been well away from fantasy and so the fact that Williams is onboard is something of a coup.

Before the score's release, Hedwig's Theme has been almost ubiquitous in the advertising, be it trailers or other merchandising plugs. The concert arrangement is featured at the end of the album, although it features in almost every track during the rest of the score so could be regarded as a fraction redundant at that stage. It's somewhere between a slightly malevolent lullaby and a burlesque waltz (although strictly speaking it's not in waltz time). It starts with twinkling celeste, but whipping up the orchestra into a vibrant danse macabre towards the finale. It is not an especially memorable theme by Williams standards, which given its heavy use throughout the score is probably a blessing since if it was utterly indelible, it would probably become a fraction more wearing than it does.

Unlike The Phantom Menace which contained numerous outstanding set pieces, Harry Potter is a smoother listen with fewer obviously outstanding tracks. There are some of course; Harry's Wondrous World introduces what seems to be a fanfare for Harry (and possibly Hogwarts School) and is a definite spine tingling moment. The Quidditch Match features some broad action music, which while not as beautifully constructed as Williams action music of old, does set the excitement level quite impressively. The final few cues starting In the Devil's Snare depart slightly from the rest of the score with The Chess Game featuring some off kilter brass and percussion and The Face of Voldemort being considerably more sinister than even the darkest moments previously.

Of course, being something of a children's fantasy, there are some comedic moments, but they are tempered from the slightly overdone Jar Jar music of The Phantom Menace and refuse to undermine the fairly serious tone of the score as a whole. Williams seems to have fun with little fanfares such as for Entry into the Great Hall, even if they do recall earlier works. In fact, lots of moments remind the listener of previous Williams scores, Hook and Home Alone particularly, although the atmosphere of Witches of Eastwick seeps through from time to time. I think it's the lack of a really strong identity that makes the score more disappointing rather than there actually being anything wrong with. Harry Potter is the kind of score that you can listen to without sitting up to notice something specific very often. Most scenes don't seem to have a distinct feel or the obvious themes of Hook or the Star Wars scores. Those often had a theme just for one scene, but that is not the case here, it's seemingly much more through composed. The choir is used prominently and bolsters the very broad feel to the writing. It does just about support the generous running time of the album and the slightly less in your face thematic material means there is perhaps more to discover on repeat listens than an equivalent Williams score from the 80's. Given the quality of his more serious works of late, I wonder if Williams is just a little burned out on fantasy. However, whatever one says, I doubt there are many composers around today who would have written such a rich and interesting score - even less than perfect John Williams is still ten times better than most contemporary film composer's works.
Oscars: Best Original Score (Nominee)

Other releases of Harry Potter and the Sorcerer's Stone (2001):