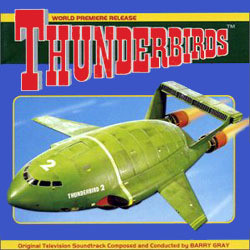 Show reviews in other languages
Thunderbirds - 06/10 - Review of Tom Daish, submitted at 2010-09-13 20:49:58
5... 4... 3... 2... 1... etc. If anyone needs proof that children's TV was better in the good old days, then Thunderbirds can be held up as a prime example of top notch adventure, even if the lead characters were only a few feet tall and highly strung. It lacks the sophistication of more adult fare such as Star Trek, but compared to the somewhat dull Irwin Allen serials being made on a much higher budget at the same time, Thunderbirds is vastly more exciting and imaginative, with generally better acting. True, the effects weren't realistic, but that wasn't really the point, they were done with so much flair and contained such amazingly unlikely vehicles, they still looked great. While John Williams and Jerry Goldsmith were underwhelming for Allen, Barry Gray was the composer of choice for producer Gerry Anderson and Thunderbirds is no doubt their most popular creation.

I always imagined that I'd seen plenty of albums with music from Thunderbirds, but evidently these were just re-recordings of the main theme and this marks the first release of original music from the series. From the photo, Gray looks like an unassuming chap, the Alf Clausen (of Simpsons music fame) of his day, but the music he created could probably be recognised by almost anyone. So the album begins with the thrilling Thunderbirds march, so thoughtfully massacred by many a school orchestra, but here in its tight and brisk original performance it sounds better than ever. Indeed, the sound quality of the entire album is startling in its clarity; almost no hiss or any discernible tape defects; here again, it easily supersedes the albums from the Irwin Allen serials. If it wasn't for the fact that it's in mono (save for a couple of tracks), it could have been recorded yesterday.

As the notes mention, Gray recycled (as happened in the original Star Trek) many of the cues between episodes and given the budget, who can blame him? The producers of the album therefore assembled the original versions of these cues and assembled them into short suites. Perhaps the most often used was the Thunderbirds are Go! montage as International Rescue prepare for another mission accompanied by variations on the main theme. The underscore is often dramatic, almost to an absurd degree, but it's usually effective. In fact, when it gets subtle, as in the (surprisingly) understated Vault of Death it does tend to ramble a little and the comedic moments don't always work, sounding just a trifle silly at times - the cotton pickin' banjo of Jeremiah and Lady Penelope being particularly odd. Then again, a silent movie piano version of the main theme towards the end of Vault of Death is hilarious fun. The best tracks are seemingly saved for the end, the suite from Trapped in the Sky as the team have to land a stricken airliner, the fabulously designed Fireflash; full of excitement and tension, it showcases Gray at his action best.

The few lounge cues are an interesting diversion, but might have been better placed at the end of the album, but otherwise you can't really fault the presentation. Yes, the music's a bit melodramatic and when it isn't melodramatic, it rambles a bit, but for kid's serial television, it's hugely enjoyable, brimming with great tunes, even if none can upstage the main title march. The liner notes are interesting, with track by track details and a history of the production of the long awaited album. As mentioned, the sound is exceptional given the age and origin and any fan of the show will undoubtedly love every minute. FAB.

Just as a side note, Barry Gray used to play the piano in a hotel that I can see from my bathroom window, just up the hill from where I live. What are the chances of that happening, eh?!