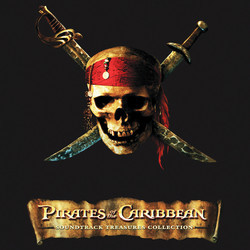 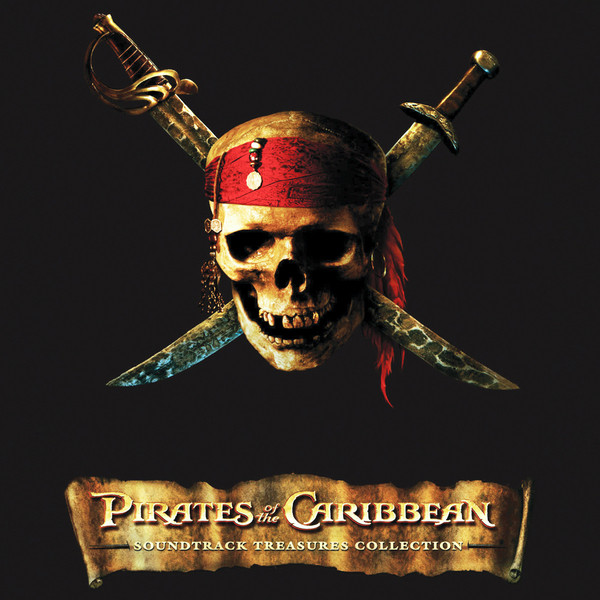 Show reviews in other languages
Pirates of the Caribbean: Soundtrack Treasures Collection - 09/10 - Review of Jason FLZ, submitted at 2010-08-19 06:28:01
The Pirates series is notorius for their scores. Curse of the Black Pearl had a composer selection of nearly ten Media Ventures composers and ghostwriters which drew much controversy from the film score community. The following films were scored mostly by the now legendary Hans Zimmer. The main theme, 'He's a Pirate', is now almost universally known by score enthusiasts and film lovers. With the soundtrack treasures collection set, all of these well known scores (plus some hearty bonus features) were able to be enjoyed together.

The first disk happens to be the score to 'Curse of the Black Pearl'. This score in particular was written by many composers including; Klaus Badelt, Hans Zimmer, Geoff Zanelli, Steve Jablonsky, Ramin Dwadji, etc. The album opens up with 'Fog Bound', Which combines some of Jack's music as well as the love theme with some of the score's darker material. 'The Medallion Calls', 'The Black Pearl', and 'Will and Elizabeth' carry on the more adventerous themes and melodies that capture Jack Sparrow's personality perfectly. Surprising for a swashbuckling pirate film, the track 'Swords Crossed' contains blasting rock music and heavy metal inspired guitars. 'Walk the Plank' and 'Barbossa is Hungry' both contain pounding action and heroic melodies. 'Blood Ritual' combines haunting choral music and action rthyms while 'Moonlight Serenade' has a nice statement of Will and Elizabeth's theme. The next three tracks are simply action pieces that contain snippets of the various themes. It isn't until 'Underwater March' that a great statement of Barbossa and his crew's theme is fully blasted out. 'One Last Shot' is a great combination of all the various themes throughout Curse of the Black Pearl. (and of course, He's a Pirate captures the film's main theme perfectly.) Overall, Curse of the Black Pearl's score is definitely a great combination of; action, adventure, and fun. Also, considering that it probably had one of the biggest composing teams for any film nowadays, it is very well put together.
8/10

After the brilliant work the Media Ventures team did with Curse of the Black Pearl, Hans Zimmer finally took over the next two films. Surprisingly, both of these scores go as far to surpass the first one. Opening up this album is Jack Sparrow's new theme for the film, which completes itself with pounding action rthyms. 'The Kraken' is definitely a unique track, especially when compared to all of the other themes used before. As opposed to more traditional music, The Kraken is a heavy metal inspired track with growling guitars and booming drums. 'Davy Jones' manages to calm down the album with a light music-box melody and an organ. 'I've Got My Eye On You' seems to pay alot of tribute to the darker themes of the first film while adding in Jack Sparrow's heroic theme. One of the more unique themes in the score happens to be 'Dinner is Served', combining tribal music with a surprisingly funny waltz. 'Tia Dalma' and 'A Family Affair' both add lighter themes to the album along with 'Two Hornpipes' adding a fun jig to balance the score out. 'Wheel of Fortune' is the highligh action piece of the album, playing around with Jack's theme a bit, and descending into both pounding action cues as well as a reprisal of the Kraken theme. 'You Look Good Jack' is easily the darkest track out of any of the scores, almost akin to a horror score. Rising nostes, brooding melodies, and intense rthyms full make up this track. The finale of the album is 'Hello Beastie', the longest track there. The first five minutes are more smooth with sadder melodies while the second half is darker with more buildup. Overall, Dead Man's Chest is a great continuation of the Pirates trilogy. Darker, more mature, and alot more complex than the previous work, this sequel score really shines. (ignoring the DJ Tiesto remix of course)
9/10

Capping off the trilogy is At World's End. Easily enough, this is the BEST of the three scores with it's complex music, great structuring, and beautiful themes. Zimmer really shines with this score and manages to reach a composing level only seen (orchestrally) with The Da Vinci Code. The album opens with a brief song which serves as one of the themes for the film, and is followed up with 'Singapore', a great combination of more ethnic instruments and fast paced action. 'At Wit's End' is where most of the film's newer themes are fully explored, and is one of the top tracks in the album. Taking newer identities such as a newer lover theme, and combining them with dramatic phrases which sound just great. 'Multiple Jacks' is an odd track. Using guitars and distorted instruments, this track takes the crazier elements of Davy Jone's Locker and combines them. Another highlight of the album is 'Up is Down', an orchestral jig that is both alot of fun and moving. 'I See Dead People In Boats' and 'The Brethren Court' both contain great passages and return to the various themes used before. The next three tracks also return fully to most of the main themes of the film, as well as Cutler Beckett's brooding theme and some great guitar music. The next highlight of the album is 'I Don't Think Now's The Best Time', a 10 minute blast of the various pirate heroic themes and some great orchestral work. 'One Day' and 'Drink Up Me Hearties' both capture the love themes with the heroic pirate music. Overall, this is the best the Hans has to offer and is the best of the Pirates trilogy. The music is simply great and definitely caps off a great collection.
10/10

The entire box set alone is worth the price. With all three of the scores, PLUS an extra disk of expanded material and remixes, PLUS a bonus DVD going into depth over the series and the composers behind it. This is definitely a great collection of great music.
9/10
Pirates of the Caribbean: At World's End (2007)

Pirates of the Caribbean: The Curse of the Black Pearl (2003)

Other releases of Pirates of the Caribbean: At World's End (2007):

Other releases of Pirates of the Caribbean: Dead Man's Chest (2006):

Other releases of Pirates of the Caribbean: The Curse of the Black Pearl (2003):