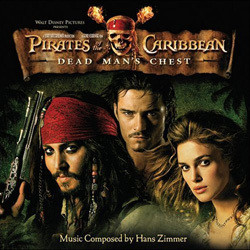 Show reviews in other languages
Pirates of the Caribbean: Dead Man's Chest - 07/10 - Review of Edmund Meinerts, submitted at 2009-10-06 21:44:47
Hans Zimmer's score for Pirates of the Caribbean: The Curse of the Black Pearl - somewhat erroneously labeled as Klaus Badelt's on the CD cover, as the score was really a coproduction of Zimmer, Badelt and a sizeable committee of ghostwriters - generated a lot of controversy. On the one hand, it rivaled Titanic and Gladiator in terms of overall popularity. On the other, most film music fans grilled it for being one of the worst Media Ventures half-orchestral messes of all time (and yearned for Alan Silvestri's rejected score). I find myself treading somewhat of a middle ground, admitting PotC 1 to be a fun album, but also being irritated by its obviously synthetic, derivative and very noisy nature.

One of the biggest problems with PotC 1 is that Zimmer tried to impose music for contemporary action flicks (The Rock, The Peacemaker etc.) on a film set in the 17th century - and he didn't insert any of the classic, adventurous, swashbuckling flair that Silvestri (if The Mummy Returns is anything to go by) definitely would have. Dead Man's Chest, at least, attempts in part to correct that ill.

Whereas the thematic work in the first score was haphazard at best, with memorable theme after another being flung at the watcher with seemingly complete disregard for the action onscreen, Zimmer attempts to bring in some leitmotifs here, most notably a theme for Jack Sparrow that is first performed on cello over a drunken, staggering waltz-like accompaniment. It's an excellent emulation of the character's off-kilter nature. The first track, "Jack Sparrow," introduces this theme before lapsing into a bold action suite that defecates on any of PotC 1's action music from a great height.

The second track is "The Kraken", and it's a controversial cue at worst, and an excellent one at best. It introduces a shadowy organ theme to represent the deep-sea monster, an intelligent move, and nobody can deny that the theme - bizarrely reminiscent of the famous Toccata and Fugue in D Minor by Johann Sebastian Bach - sounds great and truly epic when it's handed over to the entire ensemble. However, there will always be dissenting voices arguing that Zimmer's clear use of electric guitars in this track (despite Zimmer's fervent denial of ever using the instrument) are, again, ill-suited for a 17th-century period movie. Like "Jack Sparrow", though, "The Kraken" is several notches above any of PotC 1's action music.

"Davy Jones" introduces the third major theme of this score, representing Guess Who. It's not groundbreaking in terms of the notes used, but its orchestration - first quietly on music box, then on loud organ with a thumping heartbeat below - is an unexpected breath of fresh air into the stale PotC/Bruckheimer room. This thumping heartbeat makes several subtle reprises throughout the score, and anybody who has seen the movie will know that it makes sense in context.

The middle section of this album is strangely disjunct. "I've Got My Eye On You" hails back to The Peacemaker in terms of churning electronics and male choirs, before lapsing into the memorable theme that accompanied Jack's entrance in PotC 1 ("Medallion Calls"). "Dinner is Served" is another attempt by Zimmer to think outside PotC 1's very narrow box, and incorporates tribal chanting and drums before lapsing into a full-blown, straight-laced Straussian waltz for comedic effect.

"Tia Dalma" is a bit conversational, but still interesting, and combines a sombre choral theme from PotC 1 ("Underwater March", used as Barbossa's death theme) with Davy Jones' music box. Yes, this is Hans Zimmer telling us that he is scoring a franchise, and that he actually CAN be a clever film scorer (despite what the traditionalists say). This cue gives us no less than two important story clues (SPOILER!): firstly, that Barbossa just might be hanging around Tia Dalma's place, and secondly, that Tia Dalma and Davy Jones are linked, too.

"Two Hornpipes (Tortuga)" is another leap in genre - it's a fiddle-dominated jig that one would expect to hear on the original Disneyland ride (so don't tell me there's no swashbuckle in these scores, Mr. Christian Clemmenson!!!) "A Family Affair" is a rather weak cue, offering a few conversationally sombre statements of Davy Jones' theme. "Wheel of Fortune" is another exciting six-minute action cue, but is also largely redundant as it mainly reprises material from "Jack Sparrow" and PotC 1.

"You Look Good, Jack" is a misstep of a cue, taking the worst of the plodding, conversational music from this score and combining it with the more dissonant and irritating electric-guitar-driven sections of PotC 1 ("Swords Crossed").

"Hello Beastie" is a rather bizarre and extremely lengthy cue that covers the film's climax. It turns away from the pounding action music that has dominated the Pirates scores so far, and towards a slower, more (melo)dramatic style introduced in Zimmer's epic scores (Gladiator, The Last Samurai, King Arthur and, just before this, The Da Vinci Code). Unfortunately, Zimmer collectors will have spotted it instantly - the first three minutes of "Hello Beastie" are identical, or as good as, to the last three of "Do You Think I'm Saxon?" from King Arthur. This isn't the usual Zimmer similarity - this is copying on a James Horner level, and worse. There is one section in the middle of the cue that is quite strong, an ostinato-driven, dramatic statement of Sparrow's new theme - then the cue sort of fizzles out, a bit disappointingly, with some of the sombre music from PotC 1.

As for the "Tiësto Remix" of He's a Pirate, forget it. I won't even talk about that unbelievably irritating seven-minute waste of album space.

So, how do I sum up this score? It starts strongly and pretty much careens downhill from there. There are moments here and there where Zimmer's scoring intelligence shines through in a subtle way that shows us he has a Big Plan in store for this franchise, and especially its third installment (Pirates of the Caribbean: At World's End ). But a lot of it is mundane, or plagued by poor choices on Zimmer's part. Therefore, it is slightly stronger than its predecessor, but not by much.
Pirates of the Caribbean: Dead Man's Chest - 04/10 - Review of Andreas Lindahl, submitted at 2008-01-20 21:25:40
Klaus Badelt's score for the first Pirates of the Caribbean quickly became a huge controversy when it was released a couple of years ago. Considered by many to be the low point of all Media Ventures scores, it attracted a lot of heat. However, this reviewer actually enjoyed it, although as a guilty pleasure. Its short production time shined through on many levels - from the ridiculously large number of composers involved, to the all-synth approach to a majority of cues, due to the fact that time just didn't allow for a complete orchestral recording. But all in all, it was a fun romp, with a somewhat decent proportion of swashbuckling pirate music and modern elements.

Time for the sequel then and this time Hans Zimmer decided to take the main composer credit, unlike the first score where he settled for a producer credit. This time, the production schedule allowed for a more lengthy scoring phase, which many hoped would be reflected in the quality of the music. But was it?

Not really, no. Over all, Dead Man's Chest is a huge disappointment. Instead of following, and expanding on, the quasi-pirate music written for the first film, Zimmer choses a totally different path. It's gritty, brooding and dark and with lots of heavy metal influences. Yes, that's right. Heavy metal. And although the score revolves around the original themes established in the earlier film, one gets the feeling that Zimmer only references them because he feels he has to, and there's not that much new thematic material to write home about, either.

The album opens with "Jack Sparrow", where the fiddle melody from Badelt's score is expanded upon, creating the main theme for Johnny Depp's character, as well as some typical Zimmer action music. It's a surprisingly bland theme for the hero, even if his quirkiness is well represented. "The Kraken" contains the music associated with the mythical monster/sea creature, and is dominated by brass, organ, low strings and electric guitars. It sometimes borders on heavy metal music gone orchestral and it's actually quite cheesy.

A soft music box melody opens the track dedicated to Davy Jones. With the music box soon joined by soft strings and woodwinds, this is a sentimental theme that belongs to the more memorable parts of Zimmer's score. The rest of the score ranges from plain underscore to action, with "Wheel of Fortune" being the only track that stays somewhat true to the sound established in the Badelt score. Zimmer seems to be in a phase where he pays an unusually large amount of attention to the low string sections of the orchestra. Big portions of The Da Vinci Code, for example, were dominated by writing for celli and bass, and Zimmer even enlarged those sections, adding more instruments, for that score. This trend continues in Dead Man's Chest.

The score sorely lacks that special tally ho, swashbuckling sound and feel, and the music could actually have been written for any action and adventure film out there - there's really nothing about this music that labels it as typical pirate movie music. Of course, a different take on the typical, often cliché filled music usually associated with pirates, swords and sea-battles might be a good thing. But it should at least have something that connects it sonically with previous scores in the genre. Zimmer had the opportunity to draw ideas from roughly 100 years of swashbuckling film music, but for some reason decided to pretty much ignore the past. There are exceptions, of course - some parts of the score actually DO sound rather swashbuckling, but there really not that many, and if you thought that Badelt's score for the first film lacked that certain salty flavour, well... Zimmer's score lacks it, too. And doubly so.
Trailer: