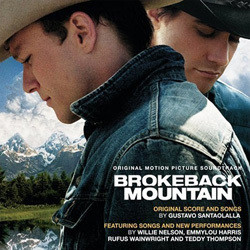 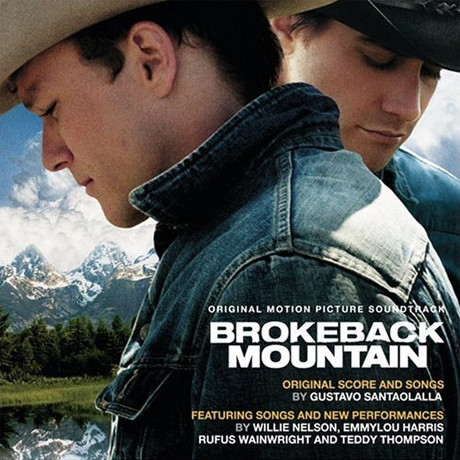 Show reviews in other languages
Brokeback Mountain - 06/10 - Review of Tom Daish, submitted at 2010-10-09 12:22:03 en
Ang Lee has one of the most eccentric filmographies of any director working today; there can't be many who would follow up a comic book epic (the variable, but often interesting Hulk) with a quiet film about a sporadic, forbidden love between two cowboys. My only previous exposure to composer Gustavo Santaolalla's work is from 21 Grams which impressed me not at all. Fortunately, Brokeback Mountain is the kind of film that requires more than tedious electronic soundscapes, indeed it's pretty much what you might expect; lots of gentle guitars, a hint of strings and plentiful country songs.

If the track listing suggest that Santaolalla gets short shrift, then it's worth noting that, in addition to the handful of instrumental cues, tracks 4, 8, 10, 11 and 13 are songs written by the composer. All depend on some appreciation for country music, but are undeniably tuneful and given fine performances by Emmylou Harris and Mary McBride (although the song she performs, No One's Gonna Love You Like Me, teeters on the brink of spoof) amongst others. An Angel Went Up in Flames, performed by The Gas Band, comes across as a paraphrase of Classical Gas, the result is fun, but mildly curious change in direction.

While very pleasant, the instrumental tracks are very much incidental, functioning as short breaks between songs and never muster up any kind of memorable melody. Brokeback Mountain is likely to walk off with handfuls of gongs in the awards ceremony season and I wouldn't be surprised to see Gustavo Santaolalla's nominated a couple of times, although this would be more a result of being by association than a true reflection of its inherent quality. There is more to enjoy than I had originally imagined, but other composers have covered similarly territory much more effectively. One wonders what Mychael Danna, who scored Lee's earlier flick Ride with the Devil, might have done. Still, nice enough, although a propensity for country and western is recommended.
Brokeback Mountain - 04/10 - Review of Andreas Lindahl, submitted at 2008-01-20 21:25:40 en
A huge success, Ang Lee's Brokeback Mountain, based on a short story by Annie Proulx, was the big hit of 2005, winning Baftas, Golden Globes and several other awards, including an Academy Award. Sure, only a nomination at the time of this review, but it will win the golden boy, trust me.

Gustavo Santaolalla's score for the film has been equally praised, it, too, winning a fair share of awards. For some really strange reason I fail to see - or hear - I might add. Sataolalla's music is soft, acoustic and country inspired, performed by a small string ensemble, joined by acoustic guitar and other solo instruments, with the entire score revolving around a soft, but quite anonymous theme. And that's it, really. There's only about 13 minutes of score on this album and it all sound the same - simple, but kind of nice in a very "well, that sounded ok, but I think I'll listen to something more interesting instead" kind of way.

Frankly, the Academy Award nomination, and the praise this score has been covered in, is a huge mystery. Brokeback Mountain is a relaxing little score, but it's far from Oscar material. One theme, repeated over and over again, does not make an Oscar worthy score.

And to make the soundtrack album listening experience a little strange, the short score tracks are placed between the many country songs included - some of them written by Santaolalla - which unfortunately means that the get completely buried, disappearing among songs by Willie Nelson, Emmylou Harris, Linda Ronstadt, Rufus Wainwright and others. To be frank, Santaolalla's score isn't all bad, but it's hard to fully appreciate it as a standalone listening experience.

Other releases of Brokeback Mountain (2005):