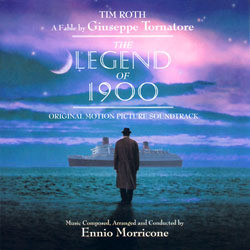 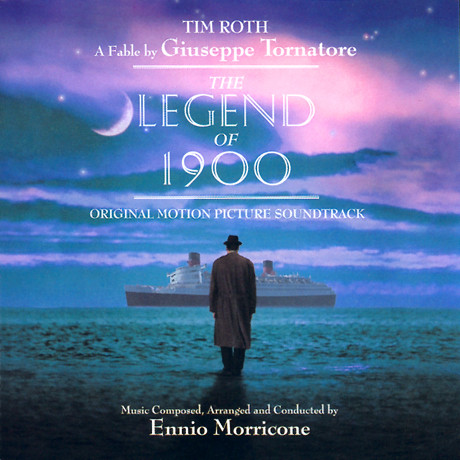 Show reviews in other languages
The Legend of 1900 - 08/10 - Review of Tom Daish, submitted at 2010-09-29 23:03:40
Despite still writing consistantly brilliant scores year in, year out for longer than most of us realise, Ennio Morricone's beautiful score to The Legend of 1900 is one of the only recent efforts to have reached such a wide audience. The film, starrting Tim Roth as an orphan who has only ever lived on an ocean liner and playing piano in the bar, is told as a flashback of his life. The cover that Sony Classical have used made Titanic immediately leap to mind and set me thinking what Morricone could have done with that film - wonders something akin to this I don't doubt. This release is actually a little shorter than the Italian release, but all of the best cues are still contained, even if the running order is changed slightly.

There are films where Ennio Morricone pulls out a bizarre combination of instruments for some of the most distinctive sounds in the cinema ever and there are films where he just uses his huge gift for gorgeous melodies. This is most definitely one of the latter. 1900's Theme features as a brief prologue to what could be construed as a concert version of the main theme, The Legend of the Pianist which is eight minutes of building to a sweeping string laden version of the main theme. The beginning and end both have a sombre sustained pedal note over which saxophone and piano riffs are played. The effect is possibly somewhat offputting the first time around, but it appears to represent the more unstable part of 1900's character (1900 being the lead character's name due, naturally, to him being born in that year). After its initial appearance, it gives way to a rocky string figure that swirls effortlessly like the sea, but it too eventually gives way to the lush main theme that Morricone has penned. While being typically beautiful, it didn't have quite the same number of trademark Morricone moments. Virtually every sweeping Morricone theme has a moment when the harmony changes just to push you over the edge into blubbing like a child and while there is such a moment in this melody, it is more subtle than usual and the effect is lost to a greater extent than usual. However, it is rapturous and is undoubtedly the highlight track of the score.

Of course the piano features in a large number of the underscore cues, many of which are soft and jazz inflected versions of the main theme, most notably a gorgeous trumpet performance in Playing Love. With a listing like 1900's Madness, these cues would be harsh or dissonent, but both of them are ragtime band type affairs that break into a balletic solo piano ragtime piece halfway through and as both are co-credited to Tommasi, I can only assume that one section was composed by one and one by the other. However, it makes an interesting progression from one piece to the other even if madness is perhaps not what immediately springs to mind on hearing it.

There are a few tracks which could best be described as source music, although Morricone's music is played onscreen itself. The Crave is a fun ragtime number, while Danny's Blues is a suitably langorous piano track. Despite being a reasonably proficient performer of Scott Joplin's music, I have yet to try the Peacherine Rag and it is not one that I'm terribly familiar with, however the small ensemble arrangement here (made from the original piano piece) is enjoyable and well performed. The end title song is reasonable, but I think it suffers from the pop arrangement and would certainly have come out better if it stuck to an orchestral backing only, giving it more of a musical-style ballad feeling than a slightly naff pop song.

Given the mixing and matching of styles in the score, it's impressive that it holds together so well, but ever so, I did sometimes crave for a little more of the orchestral score. There is a longer version that was released in Italy to coincide with the original domestic release of the film, which has more orchesrtal cues that might well have redressed the balance somewhat. However, there is plenty to savour here, a fabulous, beautifully drawn out main theme, some haunting interludes such as Nocturne with No Moon (Morricone sure knows how to pen poetic track titles to fit his poetic music) as well as some pretty well intergrated source music, but as a whole it didn't quite gel as well as I had hoped. However, this is almost certainly leaps and bounds ahead of what anyone else could have written and if you only buy it for the main theme, then your money will be well spent.
Golden Globes: Best Original Score (Winner)