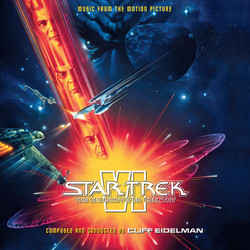 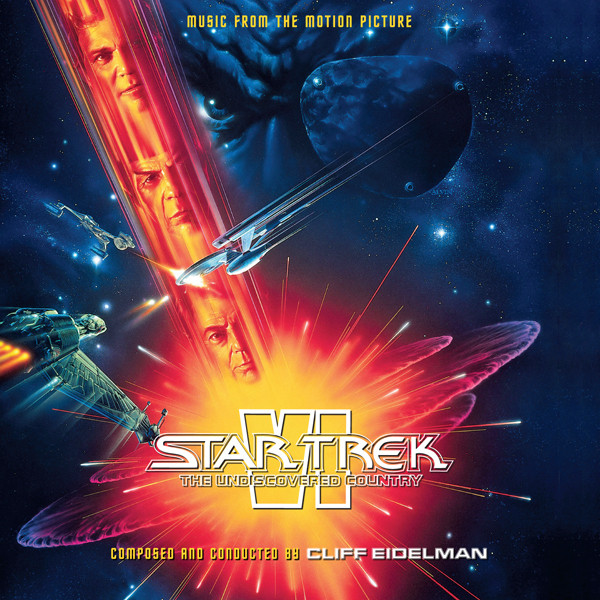 Star Trek VI: The Undiscovered Country - 09/10 - Review of Anthony Aguilar, submitted at 2012-03-08 18:40:23
Exciting, dark, and dramatic: These are the three qualities that define Cliff Eidelman's score for Star Trek VI: The Undiscovered Country. Back in '91, the Star Trek franchise was in deep trouble after the failure that Shatner directed. Nicholas Meyer had saved Star Trek before, therefore he was hired to save it again. Hiring a relative newcomer (due to cost and other restrictions) proved to be a very wise move on the part of all involved. It kept them within budget and gave Eidelman the opportunity to really stretch his wings, and stretch them he did! Cost restrictions forced only 45 minutes of score to be made available to fans in '91, but due to Eidelman's unique choices and sequencing, most of the important cues made it to the album. However, the new Intrada 2012 release is the one to get, for it contains the entire score with a few extras as well as the original album.

The film was dark, brooding, and mysterious, defined by political intrigue and the unsettling uncertainty of what the next moment could hold. Eidelman captures all of these qualities brilliantly in the Overture. His Klingon theme is not the animal-like theme Goldsmith composed nor the exotic and ferocious one that came from Horner's pen. Eidelman's is a more unsettling, uncertain, mysterious theme that captures the idea that nobody can be trusted, and everything is uncertain. It is a disturbed piece of drama that fits as a different picture of Klingons who might be on the verge of extinction, some of which willing to do anything to stay out of that eventuality. His theme for the cloaked ship is still dark but has a soaring quality that is hard not to fall in love with, especially as it turns to a major key (even sounding vaguely heroic) to signify the fact that there is 'good' at work here. The conclusion to the Overture features a collision of the two themes and is dark and ferocious. Brilliant writing!

Not so different is Eidelman's theme for Spock, which follows in the same mysterious yet noble vein as Horner's in the second and third films, yet not quite as dramatic as the one Michael Giacchino would conjure for the 2009 reboot. It is first heard in 'Spock's Wisdom' and is given a soaring yet urgent treatment in 'Escape from Rura Penthe'. The theme, for me, stands above both Horner's and Giacchino's because it more perfectly captures the mysterious nature of Spock's character as well as the overall tone of the film from Spock's point of view. He is the staple of wisdom and logic and Eidelman's theme mirrors that fact, being a stalwart and unwavering rock of clear-headedness in such uncertain and unsettling times. It is neither good nor evil, moral nor amoral. It stands alone as its own entity.

The final prominent theme is the theme for the Federation, or the Enterprise. First heard in 'Clear All Moorings', it is a positive statement of the noble heroism that has come to define the Federation. It is neither as fast-moving or exciting as either Goldsmith or Horner's themes, Eidelman instead opting for a more dramatic, slower theme of grandeur and elegance. Given the fact that this was the last film with the original cast, Eidelman's decision-making makes sense. It is enough to send them off (in the awesome 'Sign Off') with distinction, but doesn't ever overdo it with histrionics and over-dramatism. It's nostalgic and heroic and receives possibly its best treatment in the 'End Credits'. In the End Credits the theme gets a propulsive and joyous treatment and serves as the start to one of the best 'End Credits' pieces of the Trek universe.

Other themes and motifs weave their way in and out of the score, like the chopping brass and strings theme that occurs whenever disaster is happening (the end of 'The Battle for Peace/The Final Chance for Peace/The Final Count). All of them serve only to advance the story and fit in perfectly not just with this film, but the Star Trek universe as a whole. Highlights include the Overture, Rura Penthe/First Sight of Rura Penthe, Assassination, Escape from Rura Penthe, Mind Meld, and the final four tracks. Really, the entire score is a highlight of Star Trek scores and stands proudly alongside Goldsmith's and Horner's as a different and darker but still great score. The ONLY knock I have with this score is the ending of the End Credits. It seems as if Eidelman wanted to make it under a certain time limit and rushed the final seconds of the track. Still, though, it is a brilliant suite and one of the best in Star Trek history.

The extras are nice to have, particularly the trailer music. Gone are the days when composers wrote their own music for trailers. These days it is all sampled music written by musicians who exist solely to ape the Zimmer sound. Therefore it is nice to hear these pieces originally written for trailers. They gave fans a sneak peek into the themes that Eidelman composed (something that most modern trailers do not do).

Oveerall, I believe that I can label this score as a masterpiece and give it top marks alongside the classic scores that came before. It is different, slower, and darker, but of no less quality than Goldsmith's lyrical original or Horner's more adventurous 'Wrath of Kahn'. every Star Trek film score fan needs to have this in their library, and every film score fan should buy it regardless. Intrada is to be applauded for their treatment of the score and Fake for his extensive, intricate, and brilliant liner notes. Highly Recommended!

Other releases of Star Trek VI: The Undiscovered Country (1991):