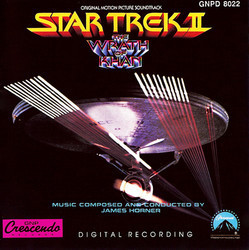 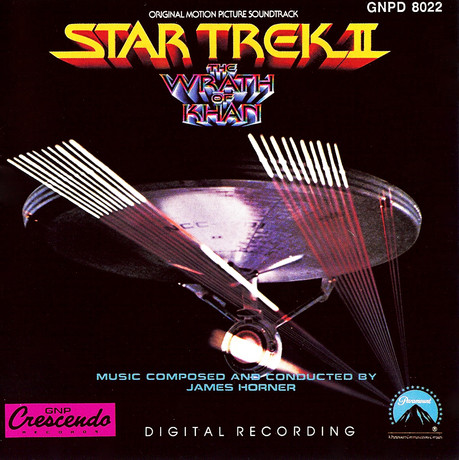 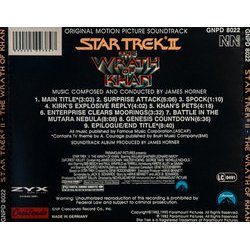 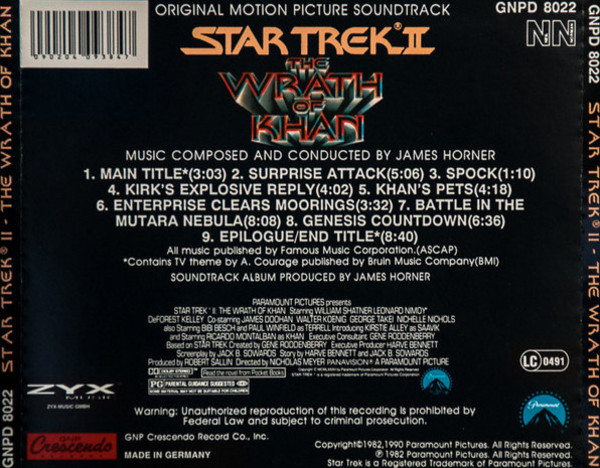 Show reviews in other languages
Star Trek II: The Wrath of Khan - 10/10 - Review of Tom Daish, submitted at 2010-09-26 19:56:50
Sci-fi films were all the rage in the early 80's after Uncle George had shown a new viability for the genre. John Williams also showed that showing exotic worlds against the backdrop of a more regular musical soundscape worked a treat; out went the Herrmann-esque theramins of the 50's and in came a booming symphony orchestra. The first of the big screen Treks, Star Trek: The Motion Picture was blessed with possible Jerry Goldsmith's finest ever and as a follow up, James Horner composed what is probably the best of his career. It is ironic that although Horner has often been accused of aping Goldsmith, his sequel score is completely different in character to Goldsmith's and takes most inspiration from the Russian classics, Prokofiev in particular.
I remember being faintly disappointed that Goldsmith's memorable theme from the original failed to open The Wrath of Kahn and indeed Horner's theme isn't quite so memorable, although the heraldic, nautical quality is just perfect for the starships as submarines take on the material. However, it's a malleable theme that actually works much better as an action motif within cues than a stand alone title melody. The second theme is much more important in Horner's somewhat less interesting Search for Spock effort, but its smooth, long line melody works beautifully on its own and is a superb, broad counterpoint to the more rhythmic main theme. Kahn's motif is a fierce triplet figure that being quite simple in construction ensures that it can be worked in quickly and effectively when needed. I certainly don't think Horner has come up with a more primal and bracing idea before or since.

The album isn't quite in film order which means the build up in Horner's ideas isn't quite so obvious. The early Surprise Attack is much more sparsely orchestrated than the more liberally orchestrated climactic cues. Having said that, the positioning of the Leaving Dry Dock cue midway does break up the action somewhat. Admittedly this moment isn't quite as impressive as Goldsmith's original, but again this comes down to the slightly less impressive main theme being used as the driving force of the cue. One final idea is the mysterious Spock, a short but effective musical side step emphasising Spock's spiritual side.

After that, the final three tracks make up almost all of the final showdown between Kirk and Kahn and are perhaps the finest twenty minutes of Horner's career and if not, are certainly the most well conceived and sustained action scoring he's ever done. Unlike his sub Goldsmithian violin runs and brass hits that he often uses these days, Battle in the Mutara Nebula and Genesis Countdown are active and function as 'proper' music that follows the action, but in a way that you don't notice the changes in pace or drama. A small moment of aggression might feature a short burst of Kahn's theme, but the musical links into and out of the motif are so well written that it is merely an extra piece of the musical fabric. Of course there are few jolts, but these are intentional ones, such as the last crushing chord of Battle in the Mutara Nebula.

Genesis Countdown ends with one of the most aching moments one could imagine - a climbing string figure as Kirk rushes down to find Spock dying in the engine room. The Epilogue and End Credits are a good summary of all the major themes which is opened with Leonard Nimoy intoning the 'Space, the final frontier' speech. An effective snippet of dialogue that counterpoints Horner's eerie and sustained high end string and synth note before surging into the main theme. It is true that Battle in the Mutara Nebula does owe a little debt to Prokofiev's Alexander Nevsky, it's certainly no closer to that than John Williams was to Holst or Stravinsky in his Star Wars scores. The structure of the cue is similar - but only in a cursory way - and has a vibrant descending string and brass figure that is again similar to Prokofiev's work, but that's as far as it goes.

I've always maintained that Star Trek II is Horner's finest score and while Krull and Brainstorm perhaps contain more invention, the through composition of this effort is still unparalleled. The film is quite modestly score in terms of amount of music with only around 15 minutes of score missing of the 45 minute album. Most are short stings, but a couple - such as the sprightly music that accompanies the crew's short shuttle ride over to the Enterprise - would be worthy additions to any (and extremely unlikely) expanded edition. The concise scoring of the film seems to have allowed Horner to never run out of ideas like I sometimes feel happens in the lengthy Krull.

I remember reading when Dennis McCarthy's Star Trek: Generations was released that the orchestra was around 100 players and yet Horner only has 80 something musicians. Despite this he manages to elicit a fiery performance with far more dynamic contrasts than McCarthy's worthy, but 'pales in comparison' effort. The recording is a touch harsh and a little remastering wouldn't go amiss, but like I said, the chances of any expanded version are small in the extreme. If it weren't so unlikely that any Star Trek score could win an Oscar then this (along with Goldsmith's original) would be more than worthy efforts. A superb score, perfectly conceived, thematically rich and full of vibrant and exciting orchestral colour. It's unlikely Horner will ever revisit his earlier style of scoring as though many of his fans prefer his more gentle style, I'd be overjoyed for him to write something as good as this again.
Star Trek II: The Wrath of Khan - 10/10 - Review of Andreas Lindahl, submitted at 2008-01-20 21:25:40
Considered by many to be one of James Horner's best and most entertaining scores, Star Trek II: The Wrath of Khan from 1982 was Horner's first big budget gig. Originally, the studio wanted to go with a synthesized score, mostly for budget related reasons, but director Nicholas Meyer managed to convince the suits that perhaps an orchestral score, with a strong swashbuckling sound, was a better idea, after all. "But let's hire a composer that won't cost us a fortune, ok?" Enter unknown composer James Horner, who got the chance of a lifetime, and nailed it. The score for Star Trek II was Horner's ticket to the film music Hall of Fame and one of the most important in his career.

Quite different from Jerry Goldsmith's score for the first Star Trek movie, apart from the subtle use of the Blaster Beam in some of the action cues, Star Trek II is one of the composer's most busy and energetic scores. Horner's 80's action music is more rough around the edges than his action music from the 90's and more recent efforts. And Star Trek II contains its fair share of unpolished, raw and brutal action music, bustling with ideas and effects first heard in scores such as Battle Beyond the Stars. Cues such as "Surprise Attack" and "Battle in the Mutara Nebula" are some of the most impressive and entertaining action cues Horner has ever written.

Compared to Goldsmith's main theme for the first film, Horner's dito isn't perhaps as memorable, although it does what it is supposed to do, creating a very nautical feeling and sound, and actually works better when it appears in the actual score, than in the "Main Title." Also worth noting is that Star Trek II includes the first ever appearance of Horner's now infamous, and incredibly overused, four note danger motif.

And be sure not to miss Horner's screen appearance, as an Enterprise crew member, in the actual film.