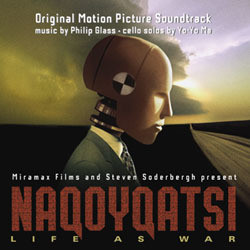 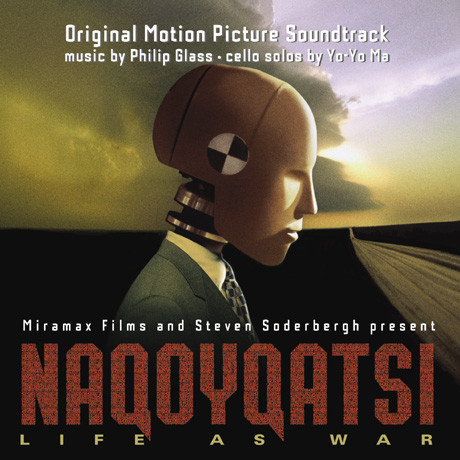 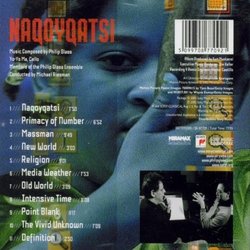 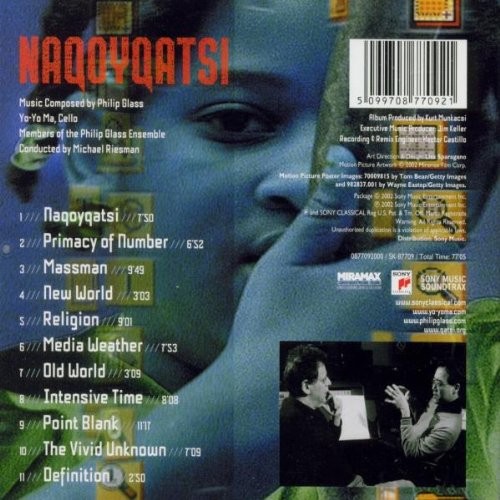 Show reviews in other languages
Naqoyqatsi - 08/10 - Review of Tom Daish, submitted at 2010-09-11 00:03:10
Film music can be many things, in many styles, but it is rarely an equal force in a motion picture. It does seem a shame that directors don't make films set to music, a kind of cinematic concert where you enjoy music and images without sound effects or dialogue. Godfrey Reggio's Qatsi trilogy, of which this is the final part is about as close to that as we are likely to get. These are labours of love, I rather think the modern audience is too inattentive to watch a film with no real plot, just a series of images attempting to make a point about the world in which we live. While not quite the same, Disney's Fantasia is about the closest mainstream film making has got to non-narrative film, but where Disney's results were verging on kitsch, Reggio's is often impressively profound.
Naqoyqatsi is Hopi for 'Life as War' in some reference to the ongoing attempts to make the world 'civilized' from a technical standpoint, whether certain parts of the world want our way of thinking or not. The 'ongoing war of ordinary daily life' as Reggio puts it. Where Koyaanisqatsi was very synthetic and regimented and Powaqqatsi edged with a sweep of world music ideas, Glass has written the music to Naqoyqatsi as the human soul of the film. The images are digitally altered and of a technological nature and so the music has to remind us of the humanity behind them. Teaming up with world class instrumentalists is popular these days and Glass has added himself to the list by working with Yo Yo Ma whose cello playing can impose humanity on any music.

The titular opening track hints at the previous scores, with a deep chorus intoning 'Naqoyqatsi,' but after that, the orchestral takes over in what could be deemed a more traditional sounding score than Glass has written previously. Ma's cello makes itself known early, although doing little more than following the rise and descent of some trademark Glass arpeggios. New World is a brief, but beautiful slow movement that is quite atypical Glass, with the feel of a cadenza for the cello. One of the few places where Ma really gets to demonstrate his immense talent. However, it turns out to be a bit of a one off, with Religion returning to more familiar ground with an enjoyable mixture of tuned percussion and brass. The cello is always featured, but in a slightly disappointing way that never seems to utilise the instrument's potential for potent beauty.

In much the same manner as fellow minimalist Michael Nyman, Glass seems to have moved from innovation to a more romantic and accessible style. This less innovative approach doesn't seem to have appealed to die hard Glass fans, feeling that he's lost some of his edge and is retreading old ground. True to some extent, but even the most innovative composers can't think of something brand new with every single commission. However, if the thought of Glass's music suggests soulless repetition, then this is a score to bring a change of mind. While it is still written in a minimal way, moving from idea to idea with each cycle, the emphasis is more on appealing melody - such as they it - and harmony. The entirely orchestral nature of the score also ensures its accessibility, especially compared to Koyaanisqatsi which can be difficult to get into. Anyone who enjoyed Kundun should get a great deal out of Naqoyqatsi and despite the album being long, there is rarely a weak moment throughout.

Soundtracks from the collection: The Qatsi Trilogy