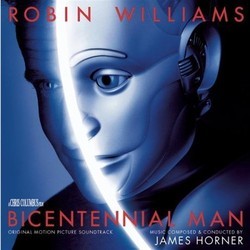 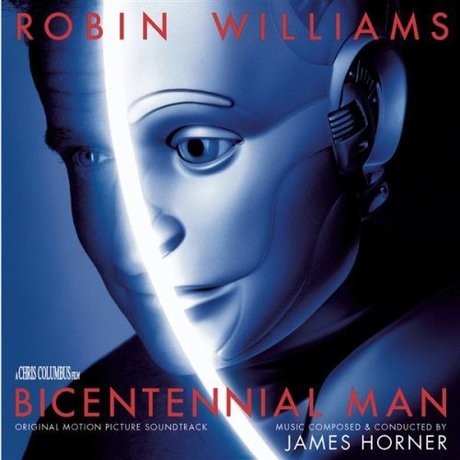 Bicentennial Man - 08/10 - Review of Andreas Lindahl, submitted at 2008-01-20 21:25:40
When Horner took a long break from scoring in 1999, it was hard being a die hard James Horner fan, not getting a new score by the composer to listen to for a whole year. But now he is finally back (replacing John Williams, who backed out, due to scheduling problems), with the score for Chris Columbus' Bicentennial Man, starring Robin Williams, Sam Neill and others.

It is a quite lovely, emotional score, in the same veins as Horner's scores for Searching for Bobby Fischer, To Gillian on Her 37th Birthday and The Spitfire Grill. With their soft strings, quiet piano and tender woodwind solos, these are some of my favorite Horner scores, and the composer himself has said that scores like those are the ones he enjoys the most to compose.

The problem with Bicentennial Man, however, is that parts of the score are incredibly derivative. One would think and hope that Horner would be back with some great new material after his year long break. And sure, the material is great, but not new, I'm afraid. Large chunks of Bicentennial Man are some of the most unoriginal music by Horner I have ever heard. The cue "The Wedding" serves as a perfect example. Opening with a horn solo, followed by quiet strings and solo piano, this cue borrows music from Deep Impact - the piano motif and other material. Later on in the cue, we are given a rendition of the really beautiful love theme. It's just one problem - it is clearly inspired by its relative from Braveheart. Now, "The Wedding" is really a wonderful, beautiful cue, and it is hard not liking it, or even loving it, but unfortunately it does not offer much new material. That is how the entire score can be described - it is mostly incredibly beautiful, with some stunning moments, but large parts of it have been used by Horner before, in his scores for The Spitfire Grill, Searching for Bobby Fischer and the other scores mentioned above.

The question then, is if this is important, and if it really makes the score less interesting, good and effective. The opinions differ. Many will probably be more than willing to tear this score apart. Other people might not care that much. As long as it serves the picture, and makes for a nice listening experience, they are happy. I am somewhere in between those two groups. One can't deny that Bicentennial Man is a beautiful score, with that genuine Horner sound many of us have come to love, and others have come to associate with unoriginality.

But with Bicentennial Man Horner also offers some really good, fresh ideas, such as the exciting "Transformed", with its lively piano, synths and glockenspiel, and "The Search for Another" - also a very upbeat, optimistic piece, with some excellent feel good music. And fans of Horner's piano solos will get a fair share of those as well in many of the cues, mostly performing the love theme, which really is a gorgeous piece, although it, as already said, contains lifts from other scores. But it is wonderful and is used quite frequently in the score. It appears in many different forms and shapes, and is sometimes performed by sweeping strings and other times by solo woodwinds, or lovely piano.

The song, "Then You Look at Me", written by Horner and Will Jennings, and performed by Celine Dion, is based on the main theme and is quite nice. The version featured on the soundtrack is not the same as the one on the Celine Dion album. This version is not as "big" and over produced, and is much more romantic and orchestral.

If you cannot stand James Horner or his lifts, I suggest you avoid this score. Don't even think about getting it, because you will hate it. However, if you don't care about the composer's controversial way of scoring films, you will probably love Bicentennial Man. It's a wonderful score, with excellent themes and orchestrations. I really enjoy the score, but at the same time I really wish that Horner would stop re-using his music.
Bicentennial Man - 06/10 - Review of Tom Daish, submitted at 2010-09-26 19:35:35
After John Williams left to pen his wonderful effort for Angela's Ashes, Chris Columbus took on the services of James Horner for Bicenennial Man. Based on an Isaac Asimov book, the film stars Robin Williams in touchy-feely mode as he plays an house maid android who lives through two centuries of the same family and eventually grows into a real human being etc etc. Yes, it is an interesting idea that was explored well with Data in Star Trek, but sounds like a pretty yucky concept for a film and the fact that its set over so many generations means that it's more than likely to have its fair share of soppy moments when characters die and so forth. Following his extended hiatus and very sporadic scoring schedule since the dreaded Titanic, James Horner seems pretty much in the same mode when he left. Essentially this is a remix of many of his previous ideas and rather than provide much (if anything) new it provides some interesting variations other well trodden motifs.

The opening cue is a kind of minimalist march that has inherited a large dose of the rather lovely music from Sneakers. Using the piano as its base, it increases until it almost explodes, leaving the piano behind on its own but then building up for another climax that sounds more like the ending from Star Trek 2. Had it been original, an inspired compostion, but as it stands, an interesting mixture of ideas that makes for a good start. What might be called the Aliens interval starts off Special Delivery and this provides for a nicely mysterious, sci-fi sound. Hints of Titanic mixed with The Spitfire Grill form some of the more atmospheric passages, such as in The Magic Spirit which has a wonderful mixture of synth and acoustic sounds that produce some of the mysterioso segments since Field of Dreams.

One of the major motifs is a slightly altered version of the gentle piano motif from Deep Impact which works well in context and thankfully isn't repeated to quite the extent it was in its source. One of the other themes from Deep Impact also makes a brief appearance during The Wedding and in fact makes this version sound almost somewhat similar to the identically titled track from Deep Impact, even if it does start to wander into Braveheart territory toward the end. Danny Elfman's favourite little motif that uses the descending and ascending motif from Morricone's Mission also makes a few notable appearances here, but in the mixture doesn't stand out quite as badly as it does in Elfman's more original efforts.

You might want to skip the song which is frankly awful, unmemorable and probably one of Horner's least inspiring efforts. Even Celine Dion's usually powerful voice seems to fail in giving it any kind of edge and could have been sung by anyone and be equally bad. In common with many recent Horner scores, the album is perhaps a fraction too generous and it wears a little thin by the end and anyone who who can't abide Horner's music will find much to slaughter. However, for its faults, this is actually quite an entertaining score and since it contains so many of Horner's trademark ideas and motifs, each track makes use of yet another idea thus it never becomes too tedious. As it contains almost no totally original material, I cannot award a high score, but if you were to hear it entirely independently of other Horner scores then this makes for a superior entry for the touchy-feely family drama genre.