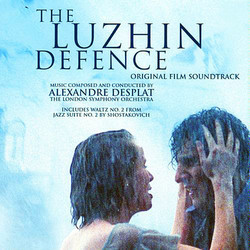 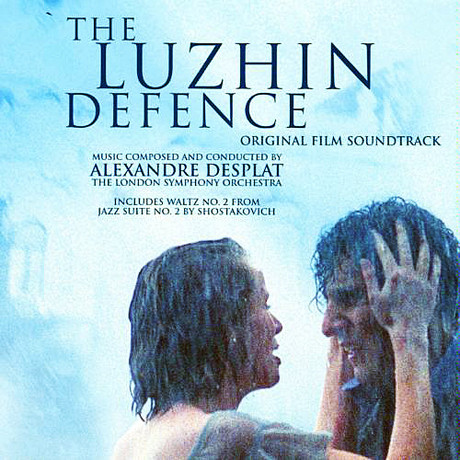 The Luzhin Defence - 08/10 - Review of Tom Daish, submitted at 2010-09-08 22:38:56
Without wishing to cast aspersions, it doesn't seem much of a surprise that chess grand masters are a little socially inept given the type of mind the game requires. So it was in the case with of Alexander Luzhin. Marleen Gorris' film follows Luzhin, in flashback tracing his childhood, and through the 'present,' as he competes in tournaments and attempts to overcome his awkwardness to woo the lovely Natalia. Chess is almost a macguffin to the human drama and so the film almost boils down to an offbeat romance. Desplat's score divides roughly into two styles. The first is exemplified in the lithe opening cues, a stylish concert arrangement of his perky, but melancholy theme which focuses on strings and piano. The Love Theme is more gentle and introverted, but transcends its status as simply a theme of love by awkward, but effective shifts in melody and harmony. However, even if it's not quite as memorable as the main theme, it's tentative optimism and delicacy is quite enchanting.
When the film shifts to flashbacks of Luzhin's early life the material takes a darker turn and cues such as Memories of Russia and Leaving Childhood have a stark turbulence that strongly contrasts with the more pleasing material. These passages do spill to the main story, notably The Dark Side of Chess and Valentinov, but Desplat shows admirable restraint and never lets the orchestration get out of hand. Even in the darkest passages, the sound is kept clean and concise, never resorting to unnecessary bluster. Desplat uses certain instrumental effects to get the results required such as asking strings to produce a scratchy sound that is a slightly unpleasant, but makes for an effective musical portrayal of the characters' emotional conflict. In any case, the more tuneful material is on hand and so after an intense, skittish track such as I Need a Defence, we are treated to one of the most positive and radiant appearances of the love theme in Natalia's Eyes.

Other touches such as the whimsical waltz of Dancing on the Lake all add to a score based on deceptively simple musical material, but one that never becomes repetitive or boring. The charm of the two main themes and variations thereon keep the ball rolling, all complimented by Desplat's lightness of touch. The disc also contains Waltz No 2 from Shostakovich's Jazz Suite No 2, given a fine performance by the City of Prague Philharmonic under Paul Bateman. It makes a nice compliment to Dancing on the Lake and although somewhat more robust than the original score, due to the richer orchestration, this is to no detriment. That it is included on the album twice does seem a touch pointless, a single inclusion at the end would have sufficed. A minor quibble, the score is delightful enough to be self recommending. Desplat seems a natural heir to Georges Delerue writing fine, tuneful and luminous scores.

Other releases of The Luzhin Defence (2000):