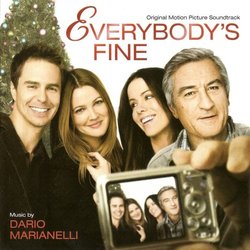 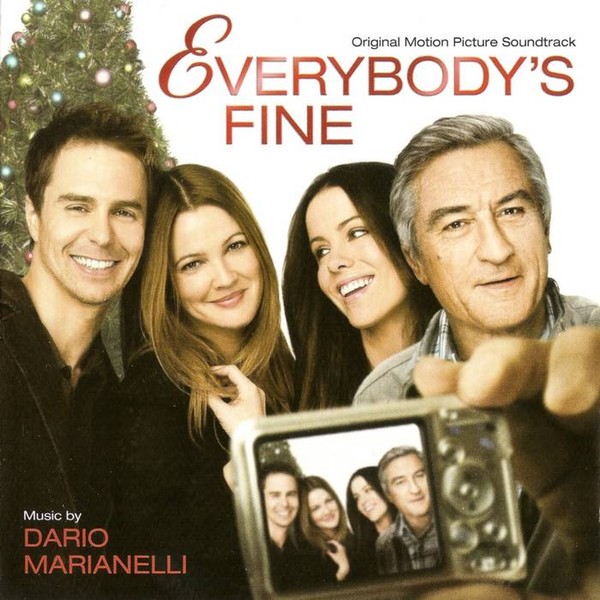 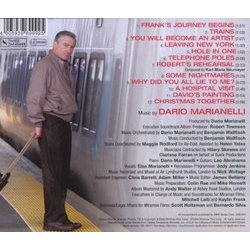 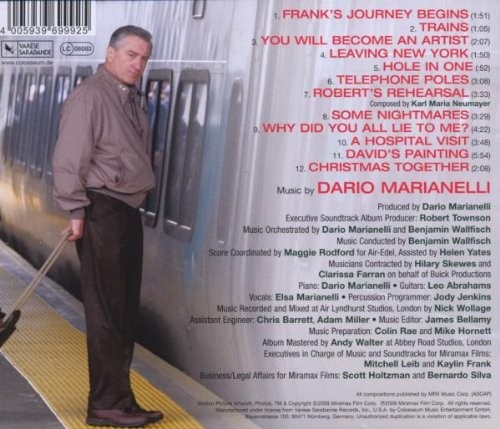 Show reviews in other languages
Everybody's Fine - 08/10 - Review of Steve Ewing, submitted at 2011-01-06 07:31:36
I’d like to get it out of the way early by acknowledging that the music scored for this film by composer Dario Marianelli is neither engaging nor new. It would not be hard to find at least a half dozen other CDs and soundtracks that feature music nearly identical to what Marianelli has scored here. That doesn’t change the fact, though, that what Marianelli has provided is very enjoyable. I actually listened to the music prior to seeing the film, and what I expected of the film after hearing the soundtrack was exactly what it offered. In other words, the music does the film justice, 100%.

For those of you who don’t intend to see the movie, however, will you still enjoy the music? Yes. The soundtrack is only 34 minutes long, which I suppose is Marianelli’s compensation for writing just one theme. It is recognizable from the very first moment of the very first track: a combination of lightly-strummed guitar chords and riffs behind the piano, which plays a quarter-note melody that is pleasant to the ear (think The English Patient or Pearl Harbor). On top of all of that are gentle swells played by a string section.

From one track to the next, the melody may alter slightly, for instance, by being played on the guitar rather than the piano, or by being played in a more syncopated manner than straight quarter notes. Still, at other times, clarinet may enter as a parallel harmony or duplicate melody to the piano. But in most instances, the music returns to the original quarter-note melody played by the piano with guitar riffs comping and swelling strings.

The track “Telephone Poles” does venture into some moderately new territory in the second half of the track when the already-familiar melody consisting of guitar and piano and light strings is heightened and given more flavor with the addition of drums and a more engaging beat. “Robert’s Rehearsal” is a brief tangent away from Marianelli’s theme: the track is a classical piece (if I had to take a stab in the dark, I’d guess it’s Mendelssohn), presumably played by the New Haven Symphony Orchestra, who were cast to “rehearse” it in the film. Whoever recorded the piece, it is painfully out of tune at times, especially the woodwinds (the flutes and piccolo are shamefully so) and the strings.

The soundtrack enters darker and more serious waters following “Robert’s Rehearsal” as the mood of the music parallels the mood of the film. In “Some Nightmares,” subtle synthetic sounds are employed, and the piano now plays a more somber (though equally beautiful) melody with strings. By “David’s Painting,” which is the penultimate track, the music is as down as the film, but written into the middle of the track is a beautiful transition from the minor harmonics to the major as the film resolves. The original theme (guitar riffs, piano melody, and string swells) from the first half of the soundtrack returns as a refreshing change from the otherwise darker music of the soundtrack’s second half. The last track is much of the same before we come to perhaps the movie’s most famous piece of music, the track written and performed by Sir Paul McCartney while the credits start to roll.... oh wait, they didn’t include it in the film’s soundtrack. A pity, to be sure.

So, Paul McCartney’s contribution to the soundtrack is omitted, none of the tracks ever reaches a tempo or mood other than calm (for lack of a better musical term), there are no powerful musical climaxes or grand flourishes, and much of the music is centered around a single basic theme that is by no means original. So why buy it or listen to it? Trust that Marianelli is a master of the soundtrack genre and knows how to write pleasant music. Trust that even though the variety of music offered is limited, that what is offered is, indeed, wonderful. Trust that if you have seen the film or will see the film, the emotions and meaning of the music - though expertly made clear by Marianelli regardless - will be even more profound and lucid. The music, on its own, can practically tell the story of the film, it’s that well written. I should hope you’ll listen to the soundtrack and partake in that story.
Original Motion Picture Soundtrack
Music Composed by Dario Marianelli
(Atonement, The Brave One)

Everybody’s Fine, a remake of Giuseppe Tornatore’s Stanno Tutti Bene, follows a widower (Robert De Niro) who embarks on an impromptu road trip to reconnect with each of his grown children (Drew Barrymore, Kate Beckinsale, and Sam Rockwell) only to discover that their lives are far from picture perfect. At the heart of Everybody’s Fine is the theme of family and physical and emotional distances traveled to bring the members back together.