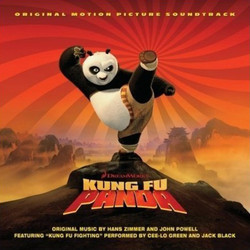 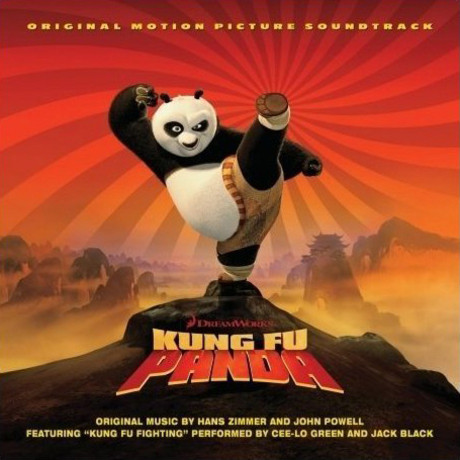 Kung Fu Panda - 08/10 - Review of Oscar Flores, submitted at 2008-06-28 06:50:07
Kung Fu Panda has been extensively marketed as one of the funniest animated movies of 2008. So far many people have enjoyed the movie, which is not a revolutionary film, but perhaps an entertaining flick that children and adults will enjoy. In the scoring department,Zimmer and Powell join forces — just like in The Road to El Dorado — and create an energetic score that showcases both composers’ talents. Admittedly, in most tracks it is very difficult to distinguish between the two writing styles; however, you will notice many identifiable musical lines that can be generally credited to one composer. On the whole, this score is as good as they get for modern animated movies. After all, when you get the creative talents of Powell and Zimmer, the results are expected to be amazing.

The first track, “Hero”, is a very solid introductory piece. Even though we hear a few hints of the “Media Ventures” sound, the piece has all sorts of themes and progressions that are more than enjoyable. The use of Middle Eastern instruments, combined with the drums and the frequent pizzicato strings, create a piece that is extremely appropriate for the movie. Many of the themes and motifs heard here will appear in many of the other tracks.

“Let the Tournament Begin” has the usual bombastic percussion that one would expect from Zimmer and Powell. More importantly, we hear one of the main themes played constantly with the various instruments. “Dragon Warrior is Among Us”, although enjoyable at times, ends up having too many variations, both in the instrumentation and in the themes, making it too inconsistent. Still, it is nice piece.

“Tai Lung Escapes” is an extremely interesting action packed cue that is possibly the best track on this score. You can tell that a lot of experimentation — in terms of the instrumentation — went on because you’ll hear all sorts of electronic sound combinations. Admittedly, I am inclined to conclude that this is one cue that belonged 95% to John Powell and 5% to Zimmer. You’ll note many instances where the music has similarities to The Bourne Ultimatum, X-Men: The Last Stand, and the Horton Hears a Who! scores. Also, many of the brass parts are reminiscent of other work John Powell has done.

“Sacred Pool of Tears” has many variations of the 7-note theme that by now will be recognizable to listeners. This, in turn, produces one of the most beautiful pieces of the album. Moreover, it’s the longest piece of the CD at close to 10 minutes in duration. It never gets boring and constantly changes direction and instruments. The beautiful orchestrations, including the many variations of the now familiar 7-note theme, among other motifs, make this a very sentimental piece at times.

“The Bridge” and “Shifu Faces Tai Long” introduce a new three-note brass motif that will be utilized in the final tracks of the soundtrack. Also, in “Shifu Faces Tai Long” we hear clearer Zimmer lines; many like the ones you would find in Pirates of the Caribbean At World’s End. However, with the recurring Middle Eastern themes within them, these tracks sound very innovative and exciting.

“Panda Po” has all of the Zimmer elements hardcore fans will be hoping for. Some elements in this track combine everything from The Lion King to Driving Miss Daisy, which results in a surprisingly solid piece.

Unfortunately, the score had to include the impossible-to-get-rid-of last song. This song — although classic in terms of historical importance — has nothing to do with the rest of the score and it is a pure marketing gimmick used by the producers. Now, it’s not that I don’t think songs can work well with a movie or album, but in this case the song doesn’t help the CD, at all. I don’t even think hardcore Jack Black fans could defend his role in this song.

The score is a magnificent creative endeavor by John Powell and Hans Zimmer. Who could have predicted such great results? Well…I’m sure Zimmer and Powell have enough fans worldwide who don’t believe this comes as a big surprise. The themes are great, memorable, and very appropriate for this animated film. Aside from a few slow-paced moments, the score is full of energy and excitement. But even in those slow, emotional moments, the music is constantly developing its themes; making it a superb listening experience. The score by itself would probably rank in the 8.5-9.0 rating, but with that last bonus song added, the whole album is negatively affected. It’s a shame that producers and studios still have to rely on irrelevant songs in order to make more money. Nonetheless, Zimmer and Powell did an admirable job that is sure to be appreciated by fans and critics alike.
Trailer: