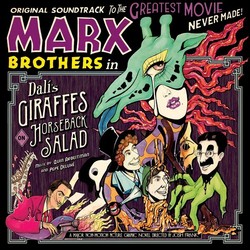 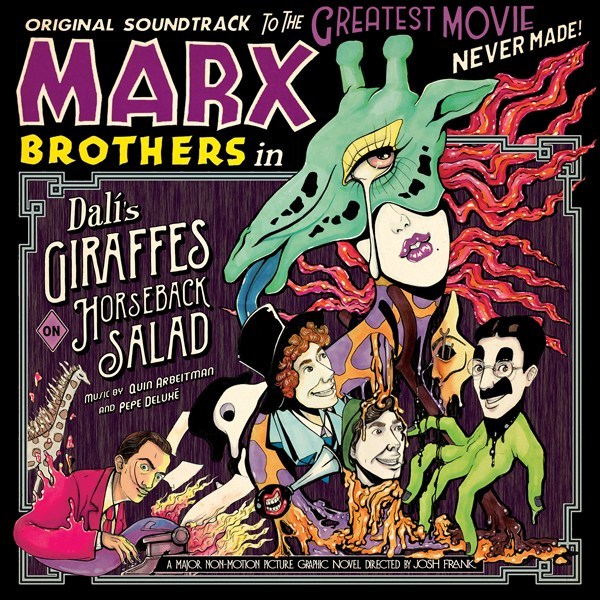 Lakeshore Records is set to release Giraffes On Horseback Salad  Original Soundtrack digitally on July 26, 2019  the companion album to the recently released graphic novel Giraffes on Horseback Salad. Written by pop culture historian Josh Frank (Fool the World: An Oral History of The Pixies), the vividly illustrated book that NPRs Fresh Air has praised and Publishers Weekly called Utterly one of a kind is based on a screenplay written in 1937 by famed Surrealist Salvador Dali as a potential movie for the Marx Brothers.

Lakeshore Records is set to release Giraffes On Horseback Salad  Original Soundtrack digitally on July 26, 2019  the companion album to the recently released graphic novel Giraffes on Horseback Salad. Written by pop culture historian Josh Frank (Fool the World: An Oral History of The Pixies), the vividly illustrated book that NPRs Fresh Air has praised and Publishers Weekly called Utterly one of a kind is based on a screenplay written in 1937 by famed Surrealist Salvador Dali as a potential movie for the Marx Brothers. The screenplay merged Dalís imaginative art with the fast-paced comedy of the Marx Brothers. Rejected by MGM, the film never made it to the silver screen, disappearing into the annals of history, a footnote in the otherwise prolific careers of artistic greats.

Fully realized and reimagined in graphic novel form (with original songs baked into the book through lyrics sung by the characters in word bubbles), Frank turned his attention to creating a REAL soundtrack with song, score and spoken word vignettes. Frank enlisted the help of composer and jazz multi-instrumentalist Quin Arbeitman who brought the book to life with a large cast of players and vocalists from around the world including Japanese harpist Kaoru Arai-Colucci who played solos throughout reminiscent of Harpos contributions to each Marx Brothers film.

Bring beverage and blanket, Josh Franks soundtrack for Giraffes On Horseback Salad has a dreamlike intensity, rabbit-holes that lead to other rabbit-holes, presented as floor show, musical comedy album that guides with libretto and gags and surreal contemplation from another time and place. Stay hydrated. The Pixies Black Francis

Dali had originally envisioned music by Cole Porter in the film and Arbeitman found himself channeling Porter in his compositions. The resulting vibrant music with a decidedly vintage flair was recorded in Osaka and Tokyo, Japan and provides the perfect backdrop to the mix of fantasy and classic comedic flourishes. Appearing on the album as characters in the book are Frank Ferrante (the Marx Bros. Estates official Groucho), Matt Roper as Chico, Brian Hemstock as Jimmy and introducing charlotte Kerbs as The Surrealist Woman. Bran Baumbartner (beloved character actor who played Kevin on The Office) brings his vocal talents to two special tracks and Finnish genre bending band Pepe Deluxe also contribute a theme song to the mix. Lakeshore Records will release the international collaboration of Giraffes On Horseback Salad digitally on July 26. La Femme Surreal will be available as an instant grat track with all preorders beginning . The book is currently available on Amazon via Quirk Books.

A comment on the Surrealists desire to challenge the mundane woes of everyday life, Giraffes on Horseback Salad follows Jimmy, a businessman whose life is turned upside down when he encounters the Surrealist Woman, a magical shape-shifting beauty who is turning his upper-class social scene on its head. Jimmy is instantly smitten with the mysterious woman, and as their relationship deepens, the powers of the Surrealist Woman begin to distort the world around them. From eye-popping parties to otherworldly scenes packed with signature Marx Brothers gags, Giraffes on Horseback Salad highlights the best of the iconic creative forces behind its conception, Salvador Dali and the Marx Brothers.

Says Frank: I am so excited to be the guy not only to collaborate with Salvador Dali to finish his dream script but to have collaborated with this international group of musical artists who together helped complete Dalis vision with a true Cole Porter inspired Phantasmagoric and surreal Soundtrack to what has been called The greatest movie never made. Well, we made it, and now thanks to Lakeshore, everyone can HEAR it too! We have created a new piece of Marx Brothers art for the world, and its a dream come true.

Says Arbeitman: Being called on to stir together the zany chaos of the Marx Brothers with Cole Porters witty grace and Salvador Dalis impeccable absurdity was (much like a Dali painting) a dream come to life that I never even knew Id had. That such ingredients would birth a soundtrack thats playful and fun was almost a given, but the mysterious beauty simmering under it all came as a complete surprise. I believe Dalis Surrealist Woman was our muse, and thanks to her haunting inspiration, now anyone who wants to see this incredible lost film can do so  simply by putting on the recording and closing their eyes.

Says Bill Marx (Harpos son): When I close my eyes and listen to the Harp Playing within the music of Giraffes On Horseback Salad, I can hear my dad.