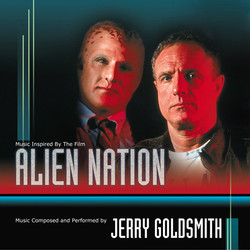 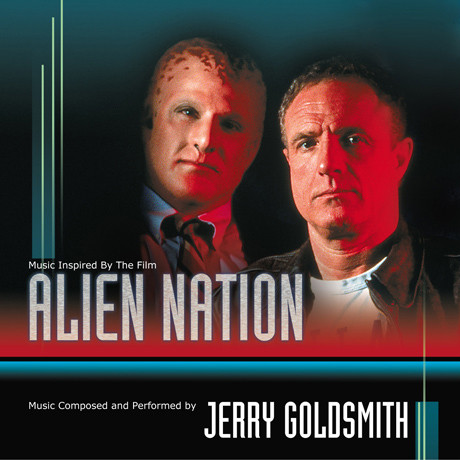 In 1988 Jerry Goldsmith reunited with director Graham Baker, for whom he had previously scored the disappointing finale to the Omen Trilogy – The Final Conflict in 1981. For the director, Goldsmith agreed to tackle Alien Nation - a science fiction take on the old police thriller genre. The film starred James Caan as an LA cop, forced to contend with a world that is slowly being repopulated by an alien race. It takes place in a very near future where America is visited by a race of “Newcomers” who are invited to join society and live among us. Sgt. Matthew Sykes (Caan) who was already slow to accept the integration of the foreigners soon finds himself avenging the murder of his partner who was shot by one of these Newcomers during an apparent convenience store holdup. To help him infiltrate the alien society, Sykes takes on a Newcomer as his new partner. Sam Francisco (Mandy Patinkin) is the first Newcomer to reach the rank of detective and is very committed to protecting the good relations between the two races. Together they must solve a series of related murders, which includes Sykes’ former partner and, in doing so, uncover a far more dangerous threat to this new society.

The thought-provoking story by Rockne S. O’Bannon was largely undersold by the film and resulted in little more than a surprisingly typical cop buddy movie. The filmmakers further squandered the contribution of the most illustrious member of the entire production when Jerry Goldsmith’s original score was unfathomably replaced with an entirely unmemorable work by Curt Sobel, a fine music editor whose only previous composing credit was on the 1984 Matt Dillon film The Flamingo Kid. The thought process behind such a move is mind-numbing. Ironically, Goldsmith’s score was used in the film’s trailer and the effect is noticeably energizing.

Admittedly, Goldsmith was largely unbothered by the whole experience. He thought little of the film, and was happy to move on with nary a look back. Given the film and the problems it possessed, the rejection of a Jerry Goldsmith score, as it did in each of the other very few occasions where his music didn’t make the final cut of the picture, reflects far more negatively on the filmmakers than it does on Goldsmith. One bit of irony that does involve the Alien Nation score is that the melody used throughout the score and prominently in the cue The Wedding, was originally composed the previous year for the film Wall Street (1987). Goldsmith departed that film over creative differences and took his theme with him. When again this music was unused after Alien Nation he would finally find it a home in The Russia House (1990) where, with a jazzier treatment and a stunning performance by Branford Marsalis, it would become one of the composer’s most famous love themes.

Alien Nation, as was Runaway (1983) and Criminal Law (1985), is an entirely synthesized score, once again performed by its composer. Ever the experimentalist, Goldsmith was fascinated by the technology and infused even his keyboard scores with his unparalleled musicianship and we can hear the composer shine through in every note. Though neither the films nor scores would be ranked alongside the composer’s major opuses, there’s always fun to be had in a Goldsmith score. However wanting the film may be, Goldsmith would always search for ways to amuse himself. His wit could not be suppressed.

It may not beThe Sand Pebbles, but we are very pleased to fill yet another gap in the composer’s discography with this particularly obscure entry. - Robert Townson