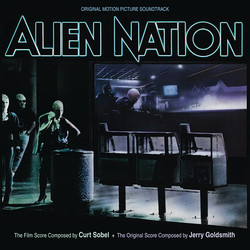 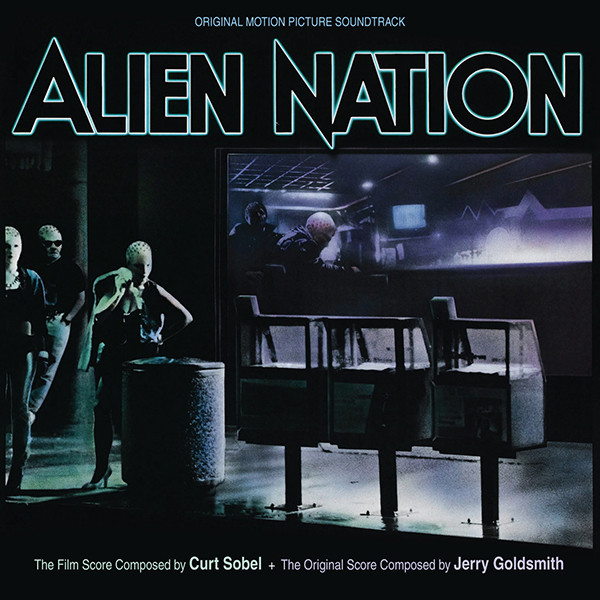 Kritzerland is proud to present a new limited edition release Ė a 2-CD set for a 1-CD price Ė the world premiere release of:

and a reissue of

Some ideas seem like naturals Ė and the idea for Alien Nation was definitely a natural Ė aliens (Newcomers) land on Earth (in Los Angeles, naturally), and are being integrated into the population of the city, which makes the population of the city a little uneasy. Itís not that far-fetched, really, if you think about it. Directed by Graham Baker, produced by Gale Anne Hurd, with a script by Rockne S. OíBannon, Alien Nation starred James Caan as a police detective and Mandy Patinkin as the first Newcomer to become a detective. So, we have a sci-fi film cross-pollinated with a buddy cop film and it was a surprisingly good fit and was a hit, spawning a sequel and a TV series.

The legendary Jerry Goldsmith was hired to provide the score for Alien Nation. As heíd already done a handful of times before, he wrote an electronic score. It was a dynamic synth score, but when the film underwent considerable reediting, Goldsmith was either busy with other things or disinclined to revise what heíd written. Rather than chop it up and try to make it fit the new, leaner version of the film, his score was discarded and composer Curt Sobel was brought in to compose a new one.

The differences between the scores are fascinating. First of all, Curt Sobelís score fits the finished film like a glove. Itís occasionally heavier on the atmosphere than the Goldsmith score, playing up the noir-ish aspects of the story (especially the main title), but still with the requisite action cues. It, like the Goldsmith score, is mostly electronic. Goldsmithís score is very propulsive, and it has a great and memorable theme Ė that theme was originally written for but not used in Oliver Stoneís film, Wall Street. When the Alien Nation score was discarded, Goldsmith recycled the theme one more time and the third time was the charm Ė for the film The Russia House.

The Jerry Goldsmith score was originally released by Varese Sarabande as a limited edition, which has been out of print for a while now. While Goldsmith was praised in the liner notes for that release, both film and Curt Sobel were given short shrift, which is a little unfair. The film is extremely entertaining, and Mr. Sobel, given a time-sensitive and difficult assignment, delivered what he was asked to deliver Ė a dynamic, propulsive and occasionally moody score that works for the film The scores are, as noted, very different, but both work well on their own terms. The Curt Sobel score has never been issued on CD Ė this is the world premiere release and itís nice to have both Alien Nation scores available in one package. Sobel prepared an album master back in the day, and that is what we used for this CD. The Goldsmith score is basically the same as the Varese, although certain dropouts and other anomalies have been fixed.