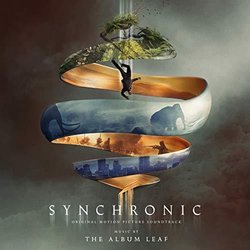 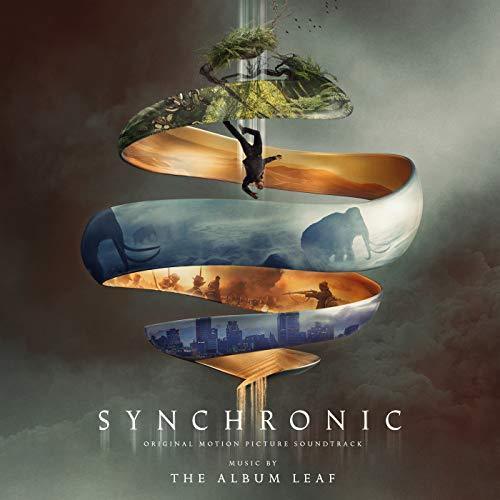 Milan Records presents, January 15, 2021, the release of Synchronic with music by The Album Leaf. The album features music from the critically acclaimed sci-fi thriller by filmmakers Justin Benson and Aaron Moorhead, which is streaming on all platforms from XYZ Films.

Milan Records presents, January 15, 2021, the release of Synchronic with music by The Album Leaf. The album features music from the critically acclaimed sci-fi thriller by filmmakers Justin Benson and Aaron Moorhead, which is streaming on all platforms from XYZ Films.

The 26-track record etches an immersive soundscape underpinned by synth transmissions, organic strings, artful experimentation, and moments of cathartic energy. It runs the gamut of everything from sonic euphoria to mania as turbulent as the action on-screen. It also builds on an ironclad creative partnership between The Album Leaf and the directors as their third collaboration. Making its debut alongside album preorder is the soundtrack’s lead single – listen to “Where’s The Victim?” here.
The soundtrack will also be made available in vinyl format, arriving as a 2-LP gatefold set from Eastern Glow Recordings.

Of the soundtrack, The Album Leaf says, “Synchronic is my third score collaboration with filmmaking duo Justin Benson and Aaron Moorhead, and with each film, I try to find something special to center the score around.
With Synchronic, I created a custom synth patch to replicate what the drug may sound like and where it could send you in time.
I was then able to find my way within the film, accompanying its many twists and turns while keeping the score cohesive. This time I was also able to collaborate with vocalists Angela Liu and Lola Blanc, multi-instrumentalist James McAlister, cellist Clarice Jensen, violinist Jake Falby, percussionist Joe Wong and cellist and double bassist Gabe Noel – I’m grateful to each performer’s improvisation and performance.
I think the score supports the film well and am excited to share it!”

When New Orleans paramedics and longtime best friends Steve (Anthony Mackie) and Dennis (Jamie Dornan) are called to a series of bizarre, gruesome accidents, they chalk it up to the mysterious new party drug found at the scene.
But after Dennis’s oldest daughter suddenly disappears, Steve stumbles upon a terrifying truth about the supposed psychedelic that will challenge everything he knows about reality—and the flow of time itself.

About The Album Leaf:

Jimmy LaValle is a musician and composer who uses synthesizers and effects to create a nuanced palette of textures and dense, evocative atmospheres.
His music defies easy categorization, with a style that creates soothing melodies, highlighted by jolts of unexpected dissonance.
While drawing inspiration from minimalist composers and sound manipulating, LaValle has developed his own unique method of decorating sonic space. In 1999, Jimmy LaValle founded The Album Leaf, a solo studio project turned full-fledged live band.
The Album Leaf has been making its mark as a soft-spoken innovator steadily and surely since 1999.
The diversity of The Album Leaf’s music is second only to the diversity of the music that has inspired LaValle through the years — the artist has named everything from German Ambient/Psych bands like Can, Cluster and Harmonia to traditional mariachi music, electronic music and Brian Eno as some of his primary influences — and it’s clear that The Album Leaf is unafraid of thinking outside the box, both as an individual artist & within the larger scope of modern music.

The project’s first releases, An Orchestrated Rise To Fall (1999) and One Day I’ll Be On Time (2001), intertwined field recordings, Rhodes piano, and a nuanced treatment of texture with mature songwriting and dense, evocative atmospheres. Following these records, which put The Album Leaf on the map for critics and fans worldwide, Icelandic band Sigur Rós discovered LaValle and took The Album Leaf on tour with them in the US, garnering the band wide exposure and recognition.

Following a European and a second US tour with Sigur Rós, LaValle soon produced the highly acclaimed releases Seal Beach (2003, Acuarela discos) and In A Safe Place (2004, Sub Pop / City Slang). Since then, The Album Leaf's influence has continued to grow.
LaValle has released other records ranging from soundtracks to collaborations with artists such as Bright Eyes & Mark Kozelek, further establishing The Album Leaf as a household name in the world of modern rock music and beyond.
The Album Leaf has toured extensively across the globe, and many of the band's songs have appeared on TV shows including HBO’s Lovecraft Country, ABC’s Scandal and more.
LaValle’s original soundtrack work includes Joanna Sokolowski and Kate Trumbull-LaValle’s Ovarian Pyscos, John Suits sci-fi thriller 3022, Adam Mason’s They Come Knocking and The Endless and Spring, two narrative features directed by Justin Benson and Aaron Moorhead. These award-winning films have played successfully at top-tier festivals, including the Toronto International Film Festival, Tribeca, SXSW, Hot Docs, and are streaming on Netflix, Hulu and Prime Video. In 2015, LaValle scored an episode of the CW network television series Valor. In 2016, the band partnered with renowned label Relapse Records for the release of the group’s sixth studio album and first since 2010s A Chorus Of Storytellers (Sub Pop).

Over twenty years into a career that has seen LaValle exercising his creativity across the realms of film scoring, sound collage and rock music via instrumental and vocal-driven compositions alike, LaValle delivered yet another sonic triumph with 2016s Between Waves, his 6th full-length release with The Album Leaf.
The album was born out of a thorough reinvention of LaValle's creative process and approach: Between Waves is The Album Leaf's first full-length record to be recorded with the band's current lineup, and was written with greater emphasis on the group dynamic (the album was also entirely recorded and produced by LaValle and the band).
The album's eight tracks were winnowed down from thirty, and it shows: each song is memorable and unique, all speaking in The Album Leaf's singular voice while expressing themselves through a wide variety of different sounds and emotions.
The band's thorough, unified approach is evident on nearly every aspect of Between Waves: the album displays multifaceted, meticulous sound design, a keen ear for balancing disparate influences, and the strongest senses of dynamics, rhythm, and composition The Album Leaf has displayed to date.
From the moody evolution of 'Glimmering Lights' to the wistful hip- hop stylings of 'A New Soul' and beyond, Between Waves is The Album Leaf at its most inventive, most confident, and most impressive.