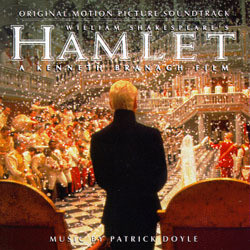 Show reviews in other languages
Hamlet - 08/10 - Review of Tom Daish, submitted at 2010-09-10 23:19:52
After the gritty and acclaimed version of Henry V and the buoyant Much Ado About Nothing, Kenneth Branagh turned is attentions to probably Shakespeare's best known play. Both those previous adaptations had been scored by the then up and coming Patrick Doyle; Henry V often hailed as the most impressive film music debut since Bernard Herrmann scored Citizen Kane. It arguably remains Doyle's finest score, although that is truly a relative measure. Much Ado About Nothing received a thrilling, almost euphoric musical accompaniment, but for Hamlet, Doyle dialed down the passion and visceral bravura of those two and composed something of a more modest offering. Hamlet was actually my first Doyle score and I did find it a little heavy going originally, but closer inspection reveals it to be a beautiful and diverse work.
I've not yet had the fortune to see Branagh's four hour Hamlet, but I'm hoping that I will when it is released on DVD, although I feel I have rather missed out not having seen it in a large cinema. However, the one overriding comment about the music I've read is that it's a little on the intrusive side, which is something I find a little hard to believe. The ensemble and melodic material is mainly modest, certainly considerably more subdued than either of the previous efforts, but maybe Doyle's approach was too romantic. It is certainly more romantic than either the edgy music penned by Shostakovich or the incredibly dour and downbeat score by Ennio Morricone for the version starring Mel Gibson. Here, the theme for Hamlet is gentle, hymn like and noble, perhaps not what one might obviously expect for such a tragic figure. The melody is first presented during In Pace which is sung by Placido Domingo, although his powerful voice seems to overwhelm the melody somewhat. I wonder if it might have better been sung by Doyle himself, whose more natural tenor voice would suit the simplicity of the melody.

Hamlet's theme makes up the backbone of the score, but melodies for both Ophelia and Claudius are introduced later on in tracks 12 and 14, respectively. Ophelia's is beautiful, albeit not easily remembered, but Claudius' is creepy and intense. Doyle's gentle underscore of the dialogue seems modest enough and listening carefully, I still fail to see how it could intrude. Doyle does allow the tension and passion to increase, most notably during the lengthy The Ghost. Starting with a terse action motif, it then moves from eerie strings, subtly suggesting Hamlet's theme through to a warmer statement of the theme, but rounded out by a quite exciting and percussive finale. Doyle's trademark bouncing arpeggio figures aren't often in evidence, but do make a brief, but ebullient appearance during What players they are, which brings to mind the style of his playful scherzos from Sense and Sensibility.

The undoubted highlight of the score is the music contained in the final few cues starting with Part Them, They are Incensed which actually recalls Shostakovich's score with the very acidic string writing and shows off the brilliant performance of the orchestra. The final two cues are the emotional high point of the score with a gorgeous trumpet solo of Hamlet's theme during Goodnight, Sweet Prince which is followed by the martial Go Bid the Soldiers Shoot in which the choir joins the orchestra for a triumphant, yet poignant close.

While some may find the score intrusive in the film, it makes for a wonderful album that requires more effort on the part of the listener than most of Doyle's scores which tend to have more instant appeal. It is also a long album and the fact that Doyle manages to avoid it dragging too often (which it does ever so slightly during the mid section) is quite an achievement. The excellent album production extends to brief, but informative notes by Doyle and a very glowing note from Branagh who evidently hugely enjoys working with the composer. Indeed, to my mind, they form one of the best director/composer partnerships in the industry today. A wonderful album and highly recommended.
Oscars: Best Original Score (Nominee)