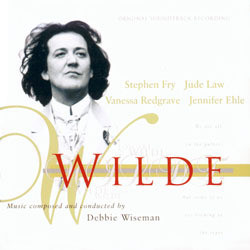 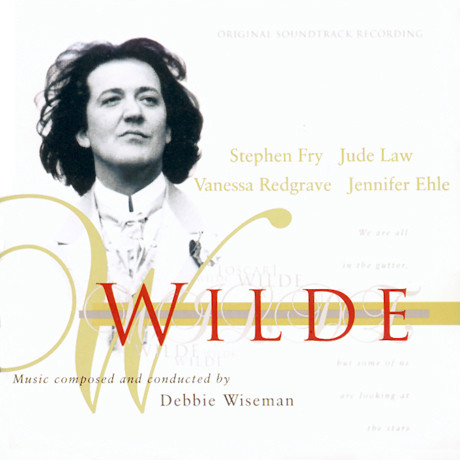 Show reviews in other languages
Wilde - 06/10 - Review of Tom Daish, submitted at 2010-10-09 13:09:59
By all accounts this was a fairly successful biopic of the life of Oscar Wilde and starred Britain's modern answer to the literary genius, Stephen Fry - whose resemblence to Wilde is quite uncanny and who is more than capable of supremely funny off the cuff wit. I always think that this kind of talky biopic must be quite a challenge to composer. They are of course duty bound to sum up the character of the person the film is about. Jerry Goldsmith neatly summed up Patton's different traits with some clever orchestral effects (the military march for his role in the army, the echoing trumpets for his belief in reincarnation and so on). However, a character such as Oscar Wilde has a much more subtle and complex personality, but Debbie Wiseman has created a proud, but somewhat sombre theme that would not be out of place in Nino Rota's canon. It is certainly one of the most appropriate and superb themes I've heard in a long while.

The second theme, which is in more of a romantic style that is actually introduced in I Do Need An Audience, but in a rather lively presentation. It is usually performed on woodwinds and winds as a more gentle melody and serves as a nice counterpoint to Wilde's own theme. Almost all of the score is based around one or other of the themes, although there are a few moments for occasional variety. For some reason (that is probably explained by seeing the film), extracts of Ah, Leave Me Not To Pine by Guilbert & Sullivan are worked in. I'm not a great fan of said writing duo, but the melody is pleasant enough and does provide for a little change from Wiseman's lovely, if overused material. Perhaps the most atypical cue is Wild West which, as the title suggests, has some of the off beat rhythms of Aaron Copland that are just worked in sparingly enough to not stand out excessively, but provide just the right Western mood. The final cue reprises the two main themes for a lengthy denoument and a great end to the score.

Despite some wonderful thematic material, one still can't help thinking that it is just a fraction overused and threatens to become repetitive at times. Scores like this are exceptionally annoying since there is no denying the effectiveness of the material, but at almost an hour, is just a fraction too much. The earlier sections have enough variety, but this tends to wane somewhat during the second half. Perhaps a little light pruning might have provided for a more compact representation of the score and as such could have been more satisfying. I could possibly be seen as being excessively harsh with the rating as the music itself is extremely good, but even the best music can become wearing after excess repetition. Even the alterations in the orchestration don't change the dramatic mood of each theme to any great extent. However, a score that shows a hugely promising future for Debbie Wiseman that is only let down by an over generous album presentation.
Wilde - 10/10 - Review of Anthony Aguilar, submitted at 2012-04-05 20:55:02
Debbie Wiseman is a composer who seems to wear her heart on her compositional sleeve, as it were. Back in 1997 she was relatively unknown until she scored the Stephen Fry vehicle 'Wilde'. A biography of the famous playwright and author, Wilde focused in more on the romantic plights of Oscar Wilde and the impact it had on the world at large. There are many ways to score such a biopic. Most modern composers would likely have composed a quiet, intimate period piece. Wiseman, however, took a slightly more bold approach and composed a loudly thick and layered dramatic score for the film. So prominent was her score that some critics of the film derided Wiseman for being too obvious and intrusive. While the music might not have been the greatest experience in the film, on album it is an absolute treat.

For Wilde himself, Wiseman composed a theme with which Nino Rota would have been proud. It is a soaring, elongated theme which says nothing to the wit of the man but everything to the dramatic turns his life would take. This theme dominates the album, as nary a track goes by where it is not at least hinted. A secondary theme is developed in 'The Wounds of Love'. This theme more explores the tragic part of Wilde's life, being drenched in melodrama and a general tone of sadness. It is nevertheless as beautiful as the main theme itself. The third theme (my personal favorite) is explored in many tracks beginning with 'Almost as Beautiful as His Mother'. This is a positive, life-affirming, major-key reflection on the love with which Wilde had in his heart and his general optimistic outlook on life (so much as I interpret the theme). It is intensely beautiful and helps bring this score to the heights it has achieved in critical acclaim.

It must be said that Wiseman chose not to truly develop her themes, being content with playing them to much the same effect through much of the score. At times they grow or dip in volume, but that is the extent to which they vary (aside from the occasional instrumental variation). However, with themes as beautiful as these, this is hardly a problem but becomes more of an asset as the album progresses. Some of the impact may have been lost otherwise. All in all, this is an epic album of tragic beauty that no true film score fan should be without. My (or anybody else's) somewhat lousy description could never do this score justice. It receives my highest marks unreservedly. Go out and buy it. NOW!

ps. The album has gone out of print, however there are many cheap copies at the Amazon Marketplace. Ranging from $6.95 to the 40s.
Wilde - 10/10 - Review of Andreas Lindahl, submitted at 2008-01-20 21:25:40
This score was a pleasant surprise to me. Debbie Wiseman has composed absolutely stunning music for Wilde, the English film about writer Oscar Wilde. With its big orchestra sound, cello and piano solos, this is a score that will blow you away. Being very moving and dramatic music as it's best, and performed mainly by strings (it's really only in the third track you really notice the other parts of the orchestra), and edified around two wonderful themes it's just wonderful. I just cannot praise this score enough.

But I can try. As I have already said there are two main themes. One of them a little sad and nostalgic, when it's given a subtle rendition, and powerful and dramatic when the whole orchestra kicks in. This theme is first heard in the first track, "Wilde", on the CD. I haven't seen the film, but I can imagine this being Wilde's own theme. The other theme is more lyrical, delicate and sweeping, more soaring than the other. This is not a theme that's suitable for big orchestral treatment, and is therefore often performed very soft by strings and subtle woodwinds, like the flute, and sometimes by solo piano, played by Wiseman herself, cello or solo oboe. Very beautiful. These two themes are utilized in the entire score; there is almost no track they don't show up in, in one way or another. The only exception being perhaps the second track, "Wild West" (which is exactly what it sounds like; a wild west inspired piece, with solo violin, bells, jew's-harp, brass and other typical wild west instruments) and the third track, "I Do Need an Audience" (which is baroque sounding cue with a playfull trumpet, strings, and heavy timpani).