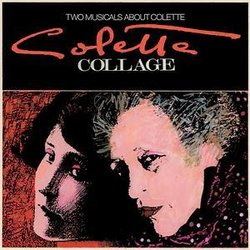 Based on the life of Colette, the Colette project had its origins in a play by Elinor Jones called Colette, starring Zoe Caldwell and Mildred Dunnock with a supporting cast featuring Keene Curtis, Holland Taylor and Barry Bostwick. Harvey Schmidt contributed incidental music, which he played at the piano onstage, and Tom Joes wrote lyrics for three songs which were sung at the beginning of the play. In the late ‘70s, Jones and Schmidt decided to try to make a full-length musical out of Colette’s life and thus begin the long struggle to compress her lengthy and colorful career into the “two hours traffic of the stage”. The first attempt reached its climax (and demise) in 1982 when a very elaborate version produced by Harry Rigby and Roger Stevens closed out of town.

A second version, considerably clarified and shorn of its large cast and elaborate production numbers, was well received when it was presented by the York Theatre Company in 1983. Even so, the authors were not completely satisfied with the results, feeling that some of the better songs from the Broadway version had been unnecessarily tossed aside. And thus it was that in 1991, in a production by Musical Theatre Works at St. Peter’s Church, Colette Collage achieved its final form. That production was sub-titled “Two Musicals About Colette”, and that, indeed, is what it was: two separate one-act musicals based on the same subject.

It’s hard to believe that this studio cast album came out twenty-five years ago. Produced by Bruce Kimmel, with a stellar and brilliant cast, and lovely orchestrations by Larry Moore, the music of Harvey Schmidt and lyrics of Tom Jones displayed the wit and beauty that is unique to them. The score is classic Jones and Schmidt – at once heartbreaking, haunting, and even occasionally hilarious. The original CD has been out of print for many, many years. We’ve spruced up the packaging and the sound and are thrilled to once again make this CD available on its twenty-fifth anniversary. If you missed it the first time around, which is probably the case, now’s your chance to discover this wonderful theater score. And, of course, the great cover art is by Harvey Schmidt.