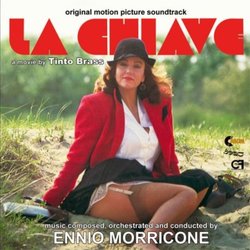 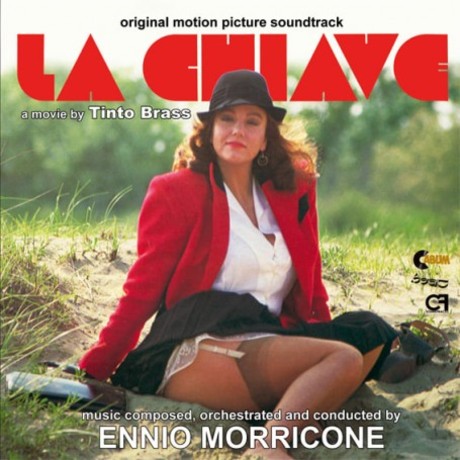 Beat Records proudly present for the first time on CD from first-generation stereo album master tapes vaulted in Cabum archives in pristine conditions ''LA CHIAVE'', a film by Tinto Brass.
Music composed, orchestrated and conducted by ENNIO MORRICONE.
''LA CHIAVE'' (aka ''The Key'' û ''La clÞ'' û ''Der Schl³ssel'') is an erotic movie directed by Tinto Brass in 1983. Screenplay by Tinto Brass based on the novel by Junichiro Tanizaki. Starring Stefania Sandrelli, Frank Finlay, Franco Branciaroli, Maria Grazia Bon, Armando Marra and Barbara Cupisti. The story of the film takes place in Venice during the Fascist era on the eve of the declaration of the Second World War. It is the story of an elderly English professor, director of the Art Biennale, and his young wife Teresa. Both are in search of their own 'ego' in their sexual relationship. In 1983, the Triple Time Music label issued a 33 rpm album (ZPLTT 34208) witth ten selections assembled by the composer himself. The same material was reissued on a French 33 rpm album (Polydor ‎û 823 179-1) and on a German 33 rpm album (Ariola ‎û 206 253-320). For this world premiere CD re-issue (total time 32:01), we have remastered the first-generation stereo master tapes valuted in CABUM archives and used for the 1983 Italian vinyl. For Ennio Morricone fans around the world, it'll surely be a welcome addition, especially considering that ''LA CHIAVE'' is one of the very few scores by Ennio Morricone that was not yet available in CD format. The album opens with a grotesque slow waltz reprising Strauss' ''The Blue Danube Waltz,'' given a very personal arrangement in ''DA VIENNA A VIENNA (1a versione)'' and reprised in ''DA VIENNA A VIENNA (2a versione)'' and ''QUATTRO FRAMMENTI PER ORCHESTRA DA CAMERA.For ''FUNEBRE E POMPOSO,'' the composer has written a very dramatic orchestral piece for a funeral. The classic side of Ennio Morricone is present in ''DUE VARIAZIONI DA UN TEMA SERENO,'' where the Baroque approach represents Venice. A happy theme with a prominent flute and waltz tempo describes the quieter moments of the plot in ''CITAZIONE DA UN VECCHIO VALZER,'' and there's a can-can with funny tonalities typical of the Petri and Tornatore movies in ''MINI CAN CAN GROTTESCO.'' A string quartet slowly describes the sensuality of the protagonist in ''TRE FRAMMENTI PER QUATTRO D'ARCHI,'' and a psychological feeling of sadness and anxiety is evoked by the seemingly quiet piece ''MALESSERE.'' The piece ''LEI PENSATA DA LUI,'' with a Baroque flavor alternating between Folk and Pop, cheerfully closes the disc.

Co-produced by Cabum, Beat Records and CF Soundtracks, La chiave is the second release in a series aiming to reevaluate the classic Cabum OST catalogue.