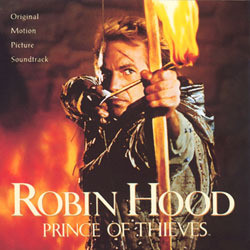 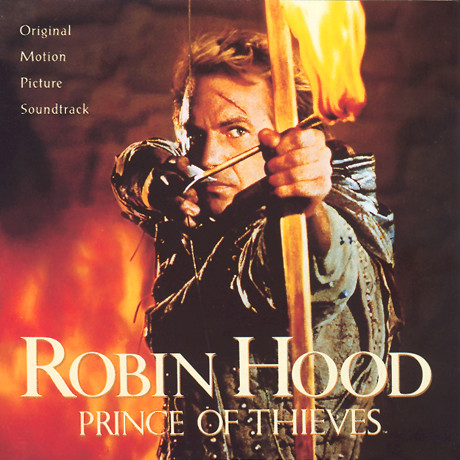 Show reviews in other languages
Robin Hood: Prince of Thieves - 10/10 - Review of Adam Andersson, submitted at 2008-01-20 21:25:40
The legend of Robin Hood is one of the most famous legends of old England. It has been told in many forms, and thus filmed numerous times. The 1991 production of the legend, starring Kevin Costner as Robin Hood, may not be the best version of the story, but regardless of its other qualities, the 1991 film had a score by Michael Kamen that definitely rises to the heights of the legend, resulting in one of the most memorable efforts in the composer’s career.

Michael Kamen’s approach to scoring Robin Hood is not so different from the approach of Erich Wolfgang Korngold in his Robin Hood score, more than fifty years earlier. Like Korngold’s score, Kamen’s is thematic, brass-driven and sweeping, in the best adventurous spirit. And it all adds up to a very entertaining listening experience, with both beauty and grandeur, delivered in a varying package that never gets boring.

The score is mainly based around one long main theme, presumably a theme for Robin Hood himself, majestically presented in the opening “Overture”, first by French horns, then joined by trumpets and brass chorus. This theme is one of Kamen’s best, and I am very happy to say that it is frequently represented on this CD. The theme appears in different guises throughout the score, but is mainly carried by brass. The arrangements are different though, and there are both the brass chorus performances of the theme as in the beginning of the “Overture” (which is the film’s main title) and at the end of “Training – Robin Hood, Prince of Thieves”, a performance on strings later in the “Overture”, and a brilliant version at the end of “A Prisoner of the Crusades”, the latter part of the first track, where the theme is performed on horns once more, with trombones laying the foundation from beneath and strings embroidering the melody from above. And there are more performances than these; these are merely highlights.

The second major theme in the score is the film’s love theme, presented in full first on harp, then followed by a gorgeous oboe statement in “Maid Marian”. The love theme is also the song theme of the Bryan Adams’ song “(Everything I Do) I Do It For You “, the film’s end credit song. The theme does not sound like merely an orchestrated song though, it is intelligently written by Kamen to work just as well as a symphonic piece as a song. And when the theme is allowed to glisten on heartfelt strings, backed up by the entire symphony orchestra, then this is film music of the highest quality. The 7th track, “Marian at the Waterfall”, is the best representation of this, and might be one of Kamen’s best film music pieces ever. Actually, as far as I am concerned it is one of the best single score pieces ever written.

The action music in Robin Hood is of a dramatic character, but also at times upbeat and heroic. All in all it never gets unlistenable – it is entertaining all the way through. The themes of the score are inserted fragmentarily into the music, and Kamen builds the music much around the long lines of melodies and not so much around pure sound and orchestral effects, which sometimes is the case with action music, and that I think can be a bit monotonous at times. Here though, the listenability of the music is kept at a high level much thanks to the fact that the music is rich with changes, both in dynamics and orchestration, and Kamen’s ability to come up with new things along the way, all the time.

As usual with Kamen scores, the music is exceptionally well orchestrated, utilising the whole harmonic range and the vast timbre of the symphony orchestra. Kamen’s only unusual instruments in this score is a variety of plucked strings, most notably the mandolin, which features in many of the tracks on the CD. This gives the score a kind of medieval feeling, which fits perfectly for a film that takes place in old England.

Kamen has, as often is the case, been assisted with the orchestration by such acknowledged orchestrators as Don Davis and William Ross, and the result is as I said perfect. The instrumentation is varied, giving solos to almost every instrument in the orchestra, even if the oboe is the most favoured instrument. There are moments of tenderness, with warm strings and soft woodwinds, and there are extremely powerful moments, where the brass section is allowed its time in the spotlight.

What about the recording and the performance then? Well, the recording and mixing is great, very well balanced, no hiss and it allows us to hear the full dynamics of the performance. The performance is however this score’s only backside. In most of the score, the Greater Los Angeles Orchestra performs brilliantly - especially the orchestra’s solo oboist does a brilliant job. But at times, the strings are out of sync, and sometimes the brass slides out of intonation. Actually, this is a very minor flaw if ever there was one, but it is there, and notable when listening closely. It all seems like a case of to little rehearsing, nothing more. But, it needs to be mentioned that even if there is one or two misplays on the CD, the recording is very vibrant and spiritual. There have been rerecordings done, by Kamen himself, that are more correctly played, but lacks the spirituality of the original. There is a feeling on the original recording that even if the musicians do a mistake here and there, they really enjoyed playing the score, which to me matters more than how correct it is. I’d take an engaged and playful performance over a bland but correct one any day.

As you may have noticed I have not had much to complain about with this score. Almost nothing, actually. And that is how good it is. I will mention for the record that it might take a couple of listens to appreciate the whole CD, but that is the case with so much music. The main theme and the love theme will however attract anyone’s ears at once. This is one of the most vibrant adventure scores I have ever heard, filled with emotion and power all the way through. It is an absolute masterpiece by a master composer that unfortunately is no longer with us.

This review is dedicated to the memory of Michael Kamen. His music will live on.
Robin Hood: Prince of Thieves - 06/10 - Review of Tom Daish, submitted at 2010-09-28 21:57:47
One of the more depressing aspects of the endless quest for cheap television is the Top Hundred Best/Worst type show, but when it comes to worst lists, many of the entries seem to songs or films that were extremely popular for a time and now everyone feels guilty for liking so much. Three movie songs have fallen victim to this, Love is All Around from Four Weddings and a Funeral (can anyone actually name another Wet Wet Wet song?), My Heart Will Go On from Titanic and perhaps the epitome of the hit movie song, Everything I Do from Robin Hood: Prince of Thieves which spent (if memory serves) an unprecedented sixteen weeks at number one in the UK charts. With that much exposure, it's hardly a surprise that nobody wants to hear it again, but it's certainly not the terrible song it's sometimes portrayed.

Kamen's score opens with the now famous Overture that builds from a bouncing 'cello figure that extends throughout the orchestra before exploding with the simple, but memorable and effective fanfare theme. There is a horn passage that always sounds like the player(s) is only just about keeping his head above water due to its speed and complexity, but the players of the Greater Los Angeles Orchestra play with enough verve and energy to pull it off. Once the excitement of the Overture subsides, things take a turn for the eerie with strange string and other exotic instruments as the heroes escape the crusades to return to England - 'Tonight I will sup with my father in Nottingham.' Despite being ripe for an exciting adventure score, Kamen was somewhat pushed for time in the composition (twelve orchestrators are named) and so some of the action music has a tendency to simply mark time. Repeating string figures with bits of brass and percussion are fine for a while, but ultimately become a little tiresome, although the occasional insertion of the main themes doesn't hurt.

The romantic music makes good use of the song melody, indeed it often sounds much more convincing than in its vocal treatment. Cues such as Maid Marian and Marian at the Waterfall have a timeless delicacy that belies the origin of the melody. Kamen adds a wistfulness that suggests misty glades, only occasionally allowing the tune to bloom into a full romantic onslaught. Perhaps the score's biggest disappointment is the Final Battle which opens with reasonable, if not entirely inspired suspense music, but fizzles out before ever becoming truly exciting. Still, the finale, which reprises the Overture ideas briefly, leaves the feeling of a solid resolution before the two songs that close the album. As mentioned, Kamen didn't have a great deal of time to compose the score and it's a testament to his skills that it has so many fine moments and great themes. I suspect that with a little more time, Kamen could have done more with his themes and it could have been a great modern swashbuckler. Still, an enjoyable romp and remember, Everything I do, I do it for you.
Golden Globes: Best Original Score (Nominee)