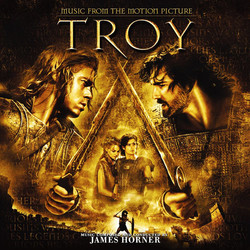 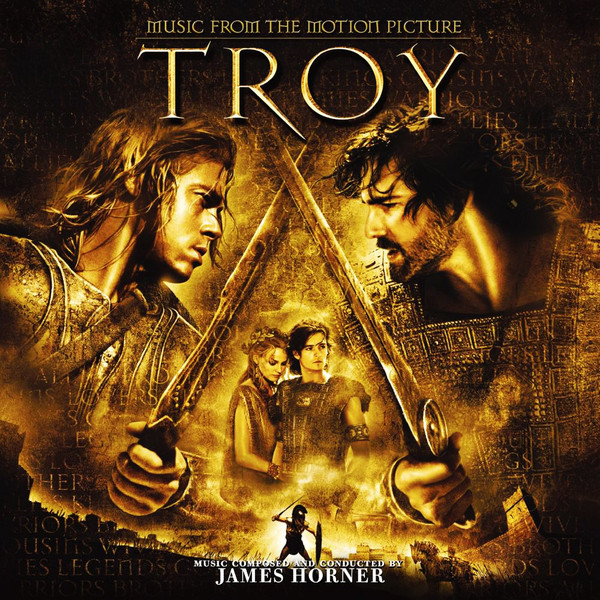 Show reviews in other languages
Troy - 04/10 - Review of Andreas Lindahl, submitted at 2008-01-20 21:25:40
Well have all heard the story by now, but let me retell it anyway. Gabriel Yared spent many months composing the score for Wolfgang Petersen's epic adventure Troy. Yared himself felt that this perhaps was his best score ever. Petersen and the producers loved it. "Great work, Yared," they said. "We love it, man." And they did. Until some guy at a test screening said "uh, hey, I think the music sounds a little too oldfashioned." So they tossed the score out the window, hiring James Horner to write a two hour long replacement score in just thirteen days. A practically impossible task, of course. The perfect suicide mission, one could say. And although Horner seems to have come out alive at the other end, his score took most of the hits, barely able to fly on its own.

First of all - that Horner was able to compose this score in just thirteen days is amazing. Because while it is far from Horner's best efforts in the genre, there's around two hours of big, epic music in this film. Horner uses the obligatory huge orchestra, as well as choir and female vocals, provided by Tanja Tzarovska - the same singer Yared used in his score for the film. The solo vocals are slightly reminiscent of Lisa Gerrard's material for Hans Zimmer's Gladiator and to say that this sound has turned into a cliché is a large understatement. When it comes to the orchestra, Horner relies a lot on brass, often bringing a short ascending and descending brass motif to the foreground ("Troy"). And dominated by action and suspense, the score is packed with Horner's typical string writing and pounding percussion. But the action material often seems to lack direction. Or rather, the score tries to move in too many directions at once. Much of Horner's action music is quite hectic and noisy, with tons of things going on at different levels of the music and in different sections of the orchestra simultaneously. This is one of the areas where it is obvious that Horner didn't really have a lot of time to compose the score and develop his ideas. It's mostly quite bland, with a couple of exceptions. "Achilles Leads The Myrmidons" is a fast paced, busy action track with some really good example of exciting and memorable writing for brass and strings. But most of it is standard Horner action music without good ideas and therefore rather uninteresting and disappointing. One exception is the beginning of "The Greek Army and It's Defeat". Here, Horner uses the lower register of five pianos to create a steady, militaristic rythm, pretty much like the sound of a marching army. It's slow at first, with these repeated piano notes, with a repeated brass figure and synths. After a while it gets faster and faster, with Horner adding percussion to the mix. Excellent music.

On to the themes. There's no memorable, easily recognized main theme, even if a somewhat heroic sounding, brass dominated, theme cropps up from time to time. The love theme, sounding a little like David Arnold's main theme for Stargate, isn't one of Horner's better love themes. Horner is a master at writing beautiful, heartbreaking love themes, so this is a little disappointing. And then there's the already mentioned theme for Troy - the ascending/descending brass motif - which actually sounds slightly corny. Also, the score is littered with at least one million appearances of Horner's patented Four Note Danger Motif™. It completely dominates some action cues and is incredibly irritating.

Now, Horner's Troy isn't all bad. It is at times a fun ride, with excellent, exciting action music, but most of the time Horner seems to just do his job and nothing more, simply moving from point A to point B, without much substance in between. It's important to remember that Horner's mission was more or less impossible and considering the short amount of time, Horner did pretty well. But that doesn't mean that Troy is a good score. But without the extensive use of Horner's four note motif, this would have been a three star score.
Troy - 07/10 - Review of Tom Daish, submitted at 2010-09-26 19:58:04
While I may not be his greatest fan, you have to feel sorry for Gabriel Yared after his Rozsa-esque score for Troy was rejected. The comment that it's a bit old fashioned is somewhat supported by the clips at Yared's website, but there's no denying that it's excellent music on its own terms. James Horner, of course, also gets a rough deal in having to score an expensive epic in almost no time, plus the less important issue of the wrath of the soundtrack fan. As with The Missing, Troy contains very little in the way of inspiring new material, but the Horner box-o-tricks is pulled together in generally more engaging ways than a lot of his scores in the last decade. The opening is not hugely promising; a vocal performance of one of Horner's favourite cadences breaks the ice, but is followed by the increasingly unpopular ethnic wailing (although I should add that it's become universally unpopular, not just when Horner does it).
Things start to improve considerably with the music for the city of Troy itself. Horner's blazing fanfare suggests a city burnished in gold and is quite splendid although, ironically, seems curiously old fashioned (although having said that, I kept imagining the Enterprise leaving dry dock while listening to it). The remaining thematic material is generally surprisingly good even if, less surprisingly, much of it is owes a debt to the classics and other scores. The main theme is stoic and noble, but pleasingly strident, while Achilles has evidently fallen through David Arnold's Stargate. A feature that is especially noticeable in the closing scenes - even my cinema going companions recognised it as being from elsewhere. Horner's four note danger motif is reworked into a more militaristic mode, which works perfectly during the battle sequences with a striking sense of menace.

As with The Missing, Troy just about sustains its typically generous running time and most of the longer tracks keep the momentum going quite nicely. The Greek Army and Its Defeat doesn't quite live up to it Alexander Nevsky inspired opening, but is still exciting enough, even if the Troy fanfare's interruption toward the end doesn't have quite the impact it should. In the pantheon of dismal Horner ballads, Remember Me is quite possibly one of the most horrible and should be avoided at all costs. Rarely have I felt such distaste when leaving a cinema to the end titles music playing than with Troy. If Homer were alive, he'd be drinking Duff. Sorry, rolling in his grave. For a rush job, it's probably better than one could have hoped for, but I suspect that any release of Yared's score (if it happens, which is admittedly unlikely) will likely eclipse Horner's efforts rather easily.
World Soundtrack Awards: Best Original Song Written for a Film: "Remember me" (Nominee)