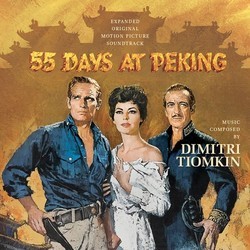 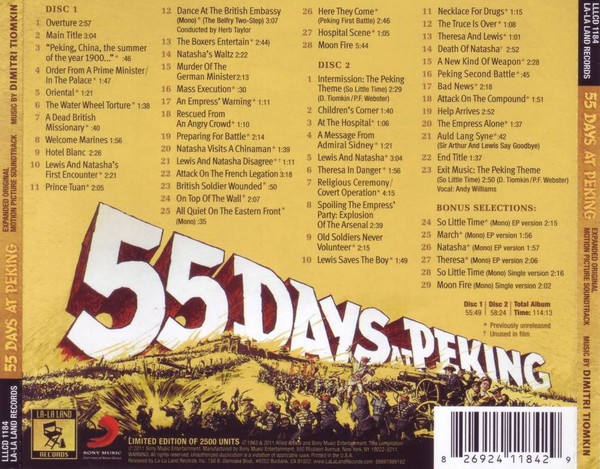 55 Days at Peking - 10/10 - Review of John Mansell, submitted at 2012-03-18 21:09:33
After experiencing the epic movie LAWRENCE OF ARABIA and having my first brush with film music I was taken to see 55 DAYS AT PEKING, I have to admit I never really noticed the music in this movie, I think I was too busy enjoying all the explosions and the battle scenes, all the costumes and the array of uniforms on display and it’s gripping storyline etc. I loved the film and a few years later came across the soundtrack LP on CBS records in a second hand store for the princely sum of 24 shillings and 6 pence, which in today’s currency is I think Ł1 25p, alongside it in the rack were THE FALL OF THE ROMAN EMPIRE and EL CID all at the same price I looked carefully at all three and decided 55 DAYS had a better cover so I got it. (I hasten to add I did return and get the other three with my saved pocket money). What I loved about the old LP records was the notes on the back cover about the movie and also the music, so whilst I travelled home on the bus I read the notes and digested them so by the time I got home and played the record I was an expert, or so I thought. Tiomkin’s music is rousing and also so melodic and I mark this soundtrack as being one of my own personal favourites and a big influence upon me in my future years as a collector of soundtracks. Before I get on to the review of this wonderful new edition on two compact discs released by the ever industrious La La Land Records, I have to say my connection with 55 DAYS the music did not end there, in my teens I started to trade LP records with other collectors and one in particular an Italian gentleman was looking for 55 DAYS AT PEKING, mine was not in great condition but he was prepared he said to take a chance, well when it came down to it I could not part with my trusty old LP so I searched around for another, but alas I could not find one, then to my surprise I saw a gatefold edition on a Japanese label, Toho records I think, which had been re-issued. The art work was wonderful and of course I was already aware that the music was brilliant, I got it thinking I would replace my old LP with it and then send the old LP to Italy, but again I could not do it so ended up sending the newly released LP to the Italian for a Morricone LP if I remember correctly. Then as compact discs took over I started to replace my LP,s with CD,s and managed to get 55 DAYS on Varese, great stuff, then a few years later I was in the same second hand store where I had purchased my original LP and there it was 55 DAYS AT PEKING the un-released music, WHAT ? I thought and picked up the disc kind of hiding it, it was a boot I thought, then it turned out to be from a private collection and contained music from the movie or music cues related to the film that had not seen the light of day, so I purchased it. It had been put together by one of the recording engineers on the original recording and contained not just unreleased music cues but also sections where you could hear Tiomkin speaking or chastising the engineers.

A wonderful compact disc which is still within my collection and one that I wont ever part with. So now comes the double CD expanded edition of Tiomkin’s soundtrack, has it been waiting for, Hell yes…..

Sweeping and grand sounding waltzes play alongside a plethora of at times chaotic, agitated but exciting action cues which are intermingled and interweaved with tender themes pour amore and beautiful oriental sounding tone poems, that seem to glide on a breeze that is infused with the smell of fresh blossom. Tiomkin’s score was like a United Nations of film music, the composer producing full on marches for American marines, British Red Coats, French, German, Russian and Italian soldiers and also providing a musical support for the rebellious boxers and Imperial Chinese troops. Maybe when we see the movie nowadays we might think for a second or so that Tiomkin’s score is a little contrived or clichéd as he provides what are now common place musical sounds and styles to depict or support each legation that is stationed at Peking. But although all are from different cultures, countries and traditions, whilst the siege is on they all manage to pull together and as it were sing from the same hymn book or in this case the same manuscript in the hands of a true master Dimitri Tiomkin. The score is indeed an epic one and is also a soundtrack that provides some wonderful support for this great motion picture, enhancing each and every scenario with wonderful melodious content as the composer etches perfectly his exciting, adventurous and luxurious musical ideas upon the proceedings ensuring that this imposing and magnificent adventure has an appropriate musical background and in some cases foreground. One cue that has always stayed with me no matter on which format I listen is ATTACK ON THE FRENCH LEGATION (TRACK N.22/DISC 1), Tiomkin’s utilization of near rasping brass and energetic strings playing out a full working of the theme that he created to accompany the Chinese Boxers, or the rebellion theme, is heard as the Boxers launch a frenzied attack on the French sector of the city. This causes panic and chaos in the streets and Natasha (Ava Gardener) is caught up in the mayhem as she makes her way to meet a contact, followed by fragments of her Russian styled theme, Tiomkin also introduces “Le Marseilles” fleetingly, depicting the French garrisons brave attempt to hold off the ferocious attack and also cope with fleeing civilians. The scene is truly impressive and is supported and elevated further by Tiomkin’s almost frantic sounding score which never lets up or pauses until the last few moments of the cue. Giving the scene a sense of depression and also alarm. Percussion, brass strings and woods work together but also battle against each other creating a musical battle royal.


But I get ahead of myself so back to Track number one, THE OVERTURE. For this opening track the composer provides us with a potted Overture of a number of the important or principal themes that we will hear later in the score. It begins with a vigorous and slightly troubled performance of the Rebellion theme which opens proceedings and heralds the start of this action filled epic, this opening is soon replaced by an up-tempo version of the theme for Natasha, which is Russian orientated in its style, although brief this theme makes its presence felt and establishes it. The composer then segues into an instrumental version of the love theme from the movie SO LITTLE TIME, introducing this haunting composition to the listener. Again this is short lived and is overwhelmed by the return of the fearsome Rebellion theme which brings the Overture to its conclusion in a outbreak of brass strings and pizzicato punctuations. Track number two, MAIN TITLE, is an fuller version of the love theme SO LITTLE TIME and is like the calm before the storm as Tiomkin’s music plays on the soundtrack it accompanies delicate Chinese styled watercolours, the calmness only being disturbed for a moment as Tiomkin allows the rebellion theme to raise its fearsome head as the title of the movie looms upon the screen. All in all there are 57 tracks on this double compact disc set, and every single one of them is a musical gem that should be savoured and appreciated, Toimkin’s score is an epic one and should be revered and respected, if you are new to collecting film music and wish to experience something that is priceless then I urge you to go and purchase this release, it is film scoring in the time honoured tradition of the Golden age even if the movie was released a decade that is more readily recognised as being Silver age. Amongst the 57 tracks there and numerous cues that have not been issued before and also an equal number that were not utilized in the film, this is an epic release and one that I recommend without reservation. Packaged to La La Lands normal high standard, it is not only a delight for the ears but a feast for the eyes. The notes by Frank K. De Wald are glorious, with a history of the film and also a track by track description.
La-La Land Records and Sony Music presents the remastered and expanded 2-CD SET of legendary composer Dimitri Tiomkin’s (SHADOW OF A DOUBT, GIANT, RIO BRAVO, THE OLD MAN AND THE SEA) score to the 1963 motion picture epic 55 DAYS AT PEKING, starring Charlton Heston, Ava Gardner and David Niven, directed by Nicholas Ray. Tiomkin's robust orchestral score, regarded as one of his finest works, soars with excitement and boundless creativity. Expanded by well over an hour beyond its original LP release, this comprehensive re-issue contains additional material that was not used in the final cut of the film. Produced by Didier C. Deutsch and Mark G. Wilder, and mastered by Mark G. Wilder from recently discovered Sony Music vault elements, this release is a must for all golden age score enthusiasts. The handsome 24-Page booklet contains exclusive, in-depth liner notes by film music writer Frank K. DeWald. This is a limited edition of 2500 units.