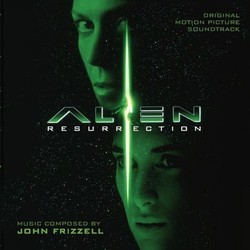 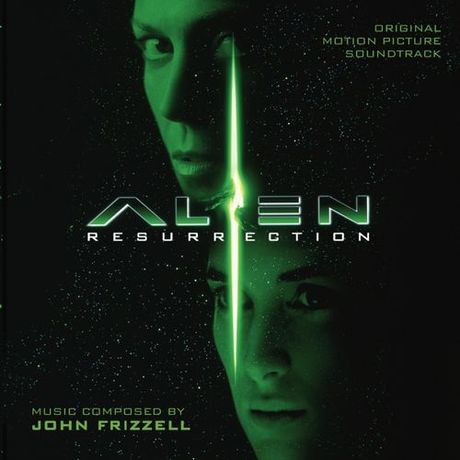 Alien: Resurrection - 08/10 - Review of Jason FLZ, submitted at 2011-04-17 16:48:46
After Alien 3 was released to less than favorable reviews, it seemed like the famous franchise was now complete. That is, until Alien Resurrection was released in 1997. The new film was helmed by director Jean Pierre Jeunet, who managed to take a very weak concept and make it as stylish as possible. Unfortunately the film was heavily criticized and is considered the worst of the series. Coming to do the music this time around was growing composer John Frizzel. In each film in the series, every composer left his mark. Goldsmith relied on more orchestral music to capture the mysterious feeling of Alien. Horner used percussion and menacing brass to capture the scifi-action feel of Aliens. Goldenthal combined dark electronics and powerful orchestrations to capture the dark mood of Alien 3. With John Frizzel's score for Alien Resurrection, the composer doesn't break any new ground. There is nothing extremely original in the score that hasn't been done before.

Alien Resurrection's re-release boasts a 2 disk set. The first features the score while the second features additional music as well as the original 1997 album. The score itself opens with the creepy 'Main Titles.' The main theme for the film is a brooding orchestral arrangement that feels a bit too dramatic. An interesting thing to point out is the brief excerpt of Goldsmith's 2 note motif in 'Entering The Ship'. Ripley's theme (also the secondary theme for the film) is played out in 'Post OP'. The piece is moving and elegant yet creepy at the same time. Frizzel also references Goldenthal in the score. Various tracks features similar ambience and synths. In 'Call's Fake', Frizzel also borrows some elements from Horner's music.

The points where Frizzel's score stands out, however, come at the more action pieces. 'Aliens Escape' and 'They Swim' are two lengthy cues that combine brassy action music and pounding electronics. Frizzel also works well with the more orchestral pieces. The reprise of Ripley's theme in 'Abduction', the building tension in 'What's Inside Purvis?', the screeching horror of the last three 'Newborn' tracks, or the percussion in 'Alien March' stand out among the other tracks in the album. However, the highlight of the album comes with 'Finale', a breathtaking choral piece. In it Frizzel manages to reah the same level as the composers before him.

Overall, Alien Resurrection is a mediocre score. Is it bad? Not at all, but compared to the other scores in the series, it's definitely the weakest. Frizzel doesn't have any unique voice in the film and the music is somewhat forgettable. Otherwise, the music is competent and the action does stand out. Check it out if you are a fan of the series and want to hear a fairly good (although not wholly interesting) score.

Other releases of Alien: Resurrection (1997):