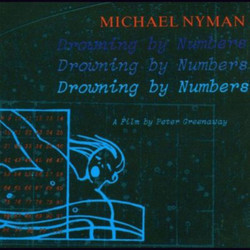 Drowning by Numbers - 08/10 - Review of Tom Daish, submitted at 2010-10-08 21:53:32
Michael Nyman is the kind of composer whose music can superficially seem simplistic, but one read through the liner note for Drowning by Numbers indicates that it's anything but simple. Indeed, the amount of effort and dedication to writing the score in the manner he did seems verging on the non-credible and the cynical might argue, rather pointless. The score is based on four bars from Mozart's Sinfonia Concertante, from which Nyman derived 92 variations for Peter Greenaway's film The Falls, but as Nyman puts it, the fragment has 'refused to lie down' and so it turns up again here. As the title suggests, the film is about drowning, this of three generations of women who are discontent with their husbands. The helpful notes indicate that there are four drownings during the film and the original Mozart was used after each, but the rest of the score is based on these four bars.

Not being familiar with the original music, I can't tell if it's heard in its original form during the score or not, but in any case, Nyman alters the orchestration to his favoured mixture of strings, with prominent saxophone. However, careful inspection and repeat listens reveal the phrase being reworked in many different guises, although curiously, all of them sound much like any completely original Nyman. In fact, if anything, there is a quasi baroque feel at times, but all tempered with a delightfully melancholy undertow that seems just ideal. Greenaway's film isn't entirely straight faced and so there are some slightly more light hearted passages, particularly Bees in Trees (just one of the very esoteric track titles), but even here, there's a little tug of sadness lurking beneath the surface. Then again, Wedding Tango is clearly going for fun, especially with its blurting bass clarinet counter melody, while Knowing the Ropes has one of those memorable motifs that Nyman throws up on a regular basis and that you just can't get out of your head.

Nyman found a keen collaborator in Peter Greenaway and seemed to delight in the possibilities for film music, always able to show that even quite talky films can receive compelling and original music, especially that of a minimalist persuasion. It can be quite dull if there's not enough invention, particularly in orchestration, but Nyman seems particularly adept at keeping it moving and there's little in the way of longeurs and nothing feels as though it's being dragged out. Having said that, there's less variation in tone and pace than in some of his other scores, but the tracks are largely brief and if the material in one cue starts to feel a touch overworked, there's soon another to take it's place. Conversely, there's a few moments which are annoyingly brief, but that's the nature of using a minimalist approach in film music - sometimes a good idea is only there in a short burst, never to be repeated. Not perhaps an absolutely ideal starter score for Nyman collectors, some may find it a bit hard going, but when you do get around to it, it's a treat.