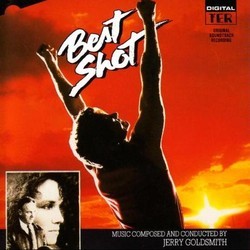 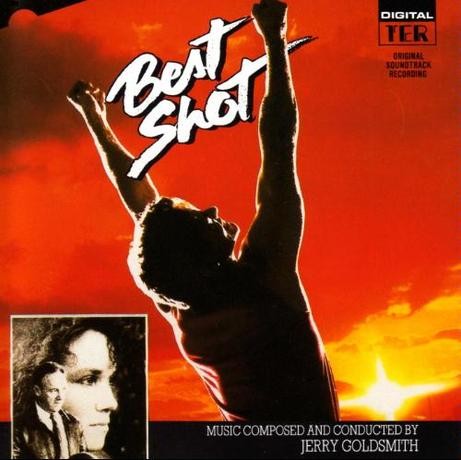 Best Shot - 08/10 - Review of Tom Daish, submitted at 2010-09-13 20:09:00
Although generally adept at integrating electronics into the traditional symphony setup, Jerry Goldsmith has only written a handful of scores where the synthesisers take main billing. Off the top of my head, I think Hoosiers (imaginatively re-titled Best Shot for the UK audience who wouldn't know that hoosiers were basketball players; don't tell me I never teach you anything... then again, I'm not sure I'm right) is the only one of these I own. Given that it pre-dates Hans Zimmer by quite a bit and that mid 80's synths weren't really that great, Goldsmith's score is extremely entertaining.

Having said that it's extremely entertaining, it's also incredibly cheesy in places - this isn't going to win awards for timelessness. The main theme, given a concert arrangement that opens the album is very 80's pop sounding and if I didn't know, would probably be hard pressed to identify the composer. However, if you can buy into it - and I did eventually - it's a very catchy tune that just screams mid-80's sports movie. In fact, it seems familiar outside of the context of the score, so I wonder whether it's been made famous somewhere else. I find myself wondering whether Goldsmith started the trend or was merely following it with regard to funky synth scores for sports flicks.

Aside from the fast paced action segments that presumably accompany either training or actual matches, the quieter parts are perhaps more familiar. In fact, a curious hoe down, wild west type motif appears a few times, most notably halfway through The Pivot and more delicately during The Coach Stays. The quieter moments faintly suggest the more recent Rudy, especially when the orchestra finally makes an appearance. The extended final cue covers the inevitable big match, which I believe is required in Hollywood sports movies under the American Constitution. A few minutes of slow burn tension building soon give way to the main theme and some very energetic writing with the orchestra taking over some of the synth parts most effectively.

The synths are not meant as orchestral replacements and don't attempt to copy real instruments, but I'm sure that if the entire score had been written just for orchestra, the type of writing Goldsmith employs wouldn't really have worked. An unusual entry in the Goldsmith body of work since most of it is, as far as I can tell (he's written so many scores, it's easy to miss things) unlike anything else he's written before or since. If the prospect of a naff synth score doesn't appeal, then I'd still recommend as after all, this is by Jerry Goldsmith and the actual composing itself is good and some of the quieter moments are very effective. With synth scores it's not always that the synths themselves that are bad, it's more often the composing, but in this case, the spirit and energy of basketball is effectively interpreted musically and much better than you could reasonably expect.